After Texas Mosque Burns Down, Local Jews Offer Synagogue, Because Decent People Do That 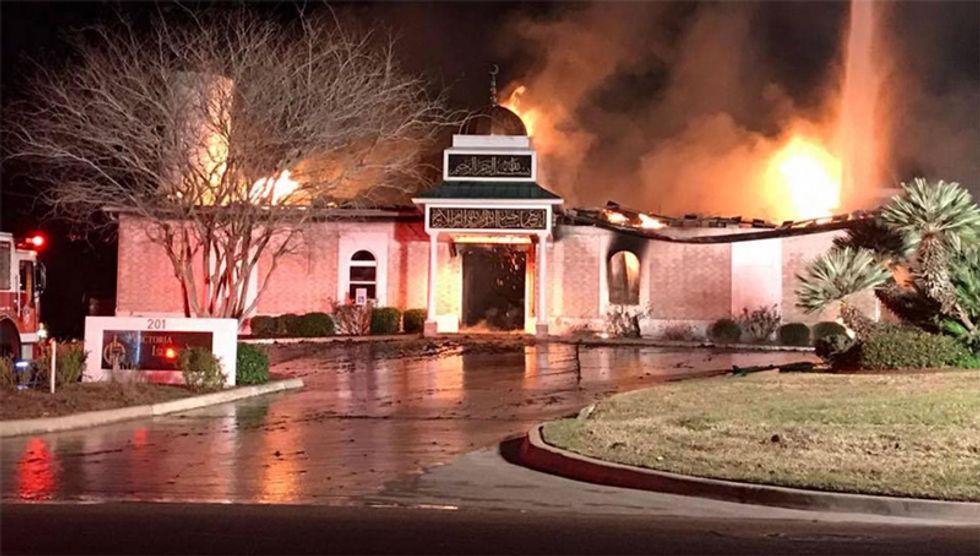 Completely coincidental this happened the day of Trump's Muslim ban

Here's one to put in your "Look for the Helpers" file and maybe remember to come back to when there's entirely too much Trump in your day. And like too many Nice Times, it starts with something terrible: In the early hours of Saturday morning, not long after Trump's immigration ban (it's not a Muslim ban, really, even though he campaigned on that! Total coincidence!) went into effect, some jerk set fire to the Islamic Center in Victoria, Texas, and although fire crews arrived quickly, the building was a total loss. Now, of course this wasn't Trump's fault, and there's no reason to think a Trump supporter might do such a despicable thing. It was probably a false flag like all other bad things that happen (and indeed, the cause is still under investigation -- we can't rule out an electrical fire or some ordinary cause, because the universe does like to fuck with us that way. But we're prepared not to be too shocked if it was arson). By the time the congregation's president, Shahid Hashmi, who was also one of its founders, got to the mosque, there was nothing to be done but "to stand there and watch it collapse [...] the fire was so huge."

The mosque, built in 2000, was a total loss, but then a Christmas Miracle happened: Robert Loeb, the president of the local Reform Jewish congregation, Bnai Israel, and other members of the congregation, showed up to hand Hashmi the keys to their synagogue for his congregation to use until the mosque is rebuilt. “Jewish community members walked into my home and gave me a key to the synagogue,” Hashmi said.

No arrests have been made in the incident. The mosque has been vandalized before; in 2013, a local man admitted to spray-painting "H8" on the walls, and on January 21 this year, someone broke into the Islamic Center and stole computers and other electronics.

It looks like a lot of people took their frustrations with the president and his anti-Muslim sentiments (which of course he doesn't have, he LOVES Muslims) and converted them to cash, too: A GoFundMe account for rebuilding the mosque has topped a million dollars, most of that in the campaign's first two days. That's well beyond the original $850K goal, so we're inclined to urge you to save your outrage dollars for the next disaster (this is a nice time post, but there will be another disaster).

But while we're feeling a little better about humanity, which is basically a lot better than our worst examples, let's also take a moment to appreciate Mr. Loeb's explanation of why his congregation helped. Oh, sure, there's the aw-shucks anyone would do it part: "Everyone knows everybody, I know several members of the mosque, and we felt for them. When a calamity like this happens, we have to stand together." But then there's this brilliant little coda:

"We have probably 25 to 30 Jewish people in Victoria, and they probably have 100 Muslims. We got a lot of building for a small amount of Jews."

You have to admire someone who's simultaneously such a mensch and so practical.

And as Yr Editrix said, "Look for the helpers. If you can’t find one, be one."