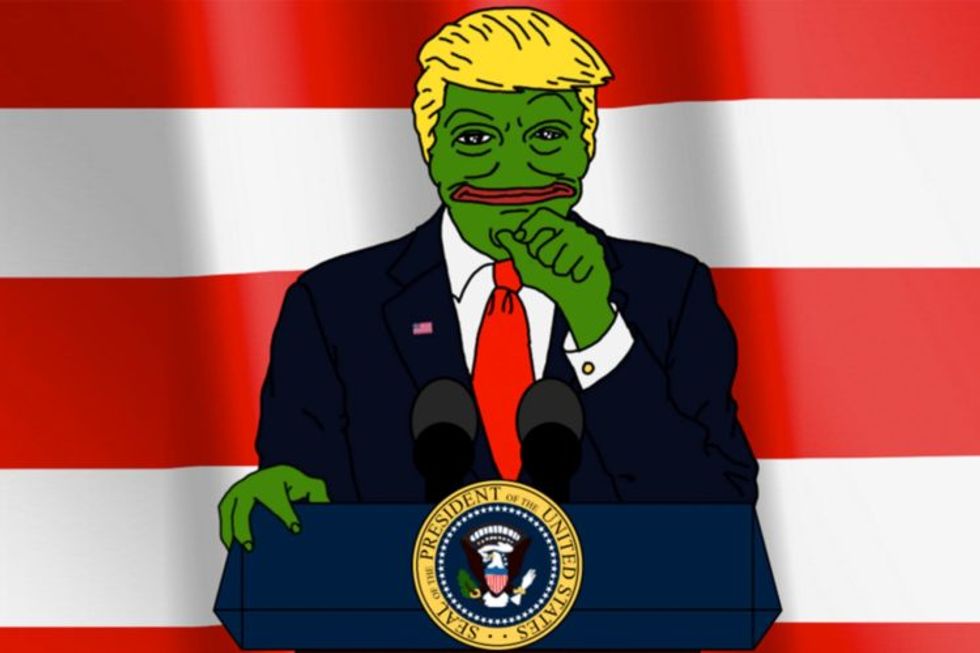 No idea why anyone thinks Trump approves of hatred

There's been a wave of threats phoned in to Jewish community centers around the country in the last week, following threats phoned in to Jewish community centers all last month, and while President I-Have-a-Jewish-Daughter gets really upset at journalists who ask what he's going to do about it, because he won the election bigly, the White House finally "responded" Monday to the threats with a mild statement saying discrimination is a real bad thing, man. White House deputy press secretary Lindsay Walters issued a statement Monday evening that condemned the threats without mentioning Jews or anti-Semitism, because you wouldn't want to get too specific about such things:

Hatred and hate-motivated violence of any kind have no place in a country founded on the promise of individual freedom. The President has made it abundantly clear that these actions are unacceptable.

What's more, just this morning, Donald Trump said he denounces anti-Semitism "wherever I get a chance," except when specifically asked about it twice last week. But today he actually said the word "anti-Semitism," called it "horrible," and said it has to stop:

Trump: I denounce anti-Semitism “wherever I get a chance”

(he didn't do so explicitly when asked twice last week)https://t.co/POfVnvFkJH

On top of that, in a speech at the Smithsonian's National Museum of African American History and Culture, Trump explicitly condemned the threats against Jewish community centers, calling them "a very sad reminder of the work that still must be done to root out hate and prejudice and evil":

Trump: anti-Semitic threats targeting Jews are “a very sad reminder of the work that still must be done to root out hate & prejudice & evil” pic.twitter.com/amGUFjnxw3

Ivanka must have told him he had to actually say the words. As for actually doing something, don't be ridiculous. If anyone asks, the White House has solved the problem.

The Anti-Defamation League issued a statement earlier Monday stating it was "deeply disturbed by additional bomb threats directed against Jewish Community Centers (JCCs) in multiple states across the United States today — the fourth series of such threats since the start of the year." Politico notes that, as of Monday, bomb threats had been received at Jewish community centers in at least 10 cities, although no actual bombs were found. The ADL said it

does not have any information at this time to indicate the presence of any actual bombs at any of the institutions threatened, the threats themselves are alarming, disruptive, and must always been taken seriously[.]

The ADL called on the Trump administration to take action:

And of course the White House did, a little later, say hatred is bad, so can we just drop this now? In addition, First Daughter Ivanka Trump agreed on Twitter that hatred is a very bad thing and even included the hashtag #JCC:

We felt compelled to include that reply, too...

Besides, it's not like anything all that bad is going on, unless by "bad" you mean eleven bomb threats to Jewish Community centers on Monday alone, for a total of 69 threats at 54 centers since January, according to David Posner of the JCC Association of North America. And that includes Canada. Oh, and the desecration of graves at a Jewish cemetery in the St. Louis area over the weekend:

At least 100 headstones were knocked over or broken in the Chesed Shel Emeth Cemetery in University City, founded in 1893; police are reviewing security camera tapes from the cemetery and nearby businesses.

Donald Trump had a press conference, and it was definitely a thing.

Now that Trump has actually said anti-Semitism is bad, we probably shouldn't expect much more, because didn't Trump already condemn hatred? In his press conference last week, the "president" made it very clear there's no one in the world who's less anti-Semitic than he is, and quite frankly, he finds the very question offensive, so SIT DOWN! Besides, he won the election and is very popular, and did he mention his daughter is Jewish and so are his grandchildren?

Let's just ignore the neo-Nazis and the other crazies. Maybe they'll go away.

So what more do you people want from the man? Some kind of specific statement that he rejects the support of anyone who embraces anti-Semitism, is deeply disturbed that some people who support him have harassed people using anti-Semitic memes, and to prove he's serious, he's going to fire Steve Bannon and renounce the "alt-right"? Do you want him to instruct the feds to keep countering violent extremism even when the violent extremist "folks" are white?

Don't be silly. He already sent somebody out to say hatred is bad, and now he's actually said the words. End of story. It's not like you're going to get him to read a book or anything. Now, if you don't mind, the president and Jeff Sessions have some voting rights cases to ignore.

Wonkette is ad-free and 100 percent supported by Readers Like You.