After Years Of Tax Cuts, Oklahoma Deeply Screwed. Good Thing That Can't Happen To The USA! 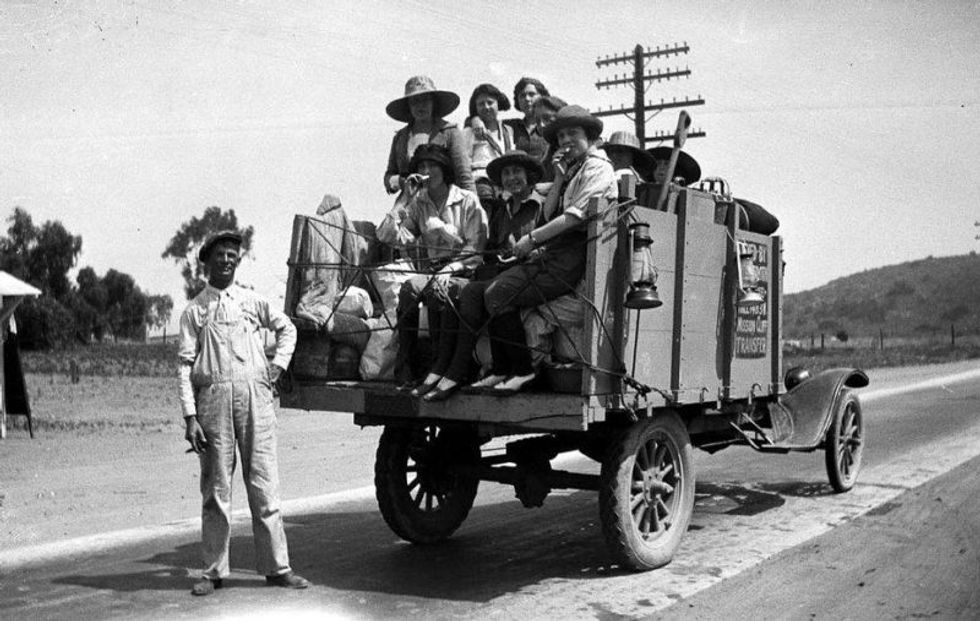 Hey, remember how Kansas Gov. Sam Brownback cut taxes like crazy and the state didn't have a free-market miracle of growth but instead went broke, and then voted for Donald Trump, who promised a great big tax cut? You'll never guess what's happened in Oklahoma, where the state government has been cutting taxes like crazy. Surprise! About a fifth of the state's schools have gone to a four-day-a-week class schedule. State Police officers have a mileage limit to cut down on fuel costs, though we wouldn't advise you to try speeding at the end of the month. The state slashed rates for Medicaid providers, so nursing homes and hospitals are shutting down. Thank god for prison overcrowding, or nobody'd have a job.

How bad has it gotten? Welp, there was this Guardian article from last August that portrays Oklahoma as a failing state, a place where out of control wildfires have to be tackled by out of state crews because the state laid off too many of own its forestry workers. Oh, yes, and one in four children is hungry. Don't worry kids, maybe there'll be some room-temperature irradiated milk in the government food box somewhere down the road.

Among other fun facts, we learn that Oklahoma pays its teachers less than "entry-level employees with a high school diploma" at the QuikTrip convenience store chain. And that the state's Teacher of the Year for 2016 up and left for Texas, because, as he said, "Teaching in Oklahoma is a dysfunctional relationship."

As NPR notes, rightwing fiscal responsibility types have made it nearly impossible to restore lost revenue after taxes get cut: Thanks to a ballot initiative passed in the 1990s, any revenue increase has to be passed by a three-quarters super-SUPER-majority in the Legislature. Impressive -- tax hikes in Oklahoma require a bigger majority than the US Constitution demands to remove a president by impeachment.

The oil and gas sector -- what Saint Molly Ivins, from next-door Texas, called the awl bidniss -- is another source of fiscal distress: When oil was booming thanks to fracking, the state cut taxes on oil to encourage the nice awl bidnissmen to stay in Oklahoma (we can say "men" because come on, it's Oklahoma. Awl bidnisswomen would make the harvest fail and the milk sour). But then the price of oil started slipping, and production slacked off, making state revenues -- about a quarter of the revenue side of the budget -- drop badly. The state has lost at least half a billion dollars a year in subsidies and tax cuts for Big Awl, which would have at least covered Oklahoma's school-funding deficit of $220 million last year, though it wouldn't have covered all the state's needs. Maybe if they could fire some janitors and make poor kids' parents sweep the halls for free to cover the costs of school lunches.

That August 2017 piece in the Guardian didn't hold out a lot of hope that Oklahoma would solve its dysfunction; it closed with these paragraphs:

“Our situation is dire,” Oklahoma finance director Preston Doerflinger said. “To use a pretty harsh word, our revenues are difficult at best. Maybe they fall into the category of somewhat pathetic.”

Governor Mary Fallin had an answer: prayer. The governor issued an official proclamation making 13 October Oilfield Prayer Day. Christians were to gather in churches and hope for a little divine intervention targeting falling worldwide oil prices. Fallin quickly back-pedalled when it was pointed out that her proclamation only included Christians. “Prayer is good for everyone,” she reasoned.

Prayer Day came and went. The price of oil has barely budged since. Three weeks after Prayer Day, however, the earth shook. A 5.0 magnitude earthquake hit the town of Cushing, a place whose claim to fame is the “Oil Pipeline Crossroads of the World”.

Gov. Fallin appears to have had a Road to Damascus (or to Dibble) moment regarding the state's fiscal problems, as NPR reported last week: In this year's State of the State speech, Fallin said she's ready to considered at least some small revenue increases, because The Children "deserve better."

Of course, there's that 75 percent requirement for any such tax plan, which means the state's tiny Democratic minority will have to vote with Rs, and somehow make up for whatever number of never-ever-raise-any-taxes votes are still insisting BIGGER tax cuts are the answer. That gives Dems in the legislature some leverage to get their priorities considered -- but it also makes them the Bad Guys if any budget agreement fails. Or if it passes, for that matter, since Rs will then be able to insist those nefarious Dems forced the state to back off forcing Medicaid recipients to eat actual dirt in order to keep the schools open.

And just think, Scott Pruitt is rumored to want to come back and be governor after he's finished gutting the EPA. That ought to go great. Here's hoping math classes can be held inside the QuikTrip.

Yr Wonkette is supported by reader donations. Please click here to help US stay in bidniss.