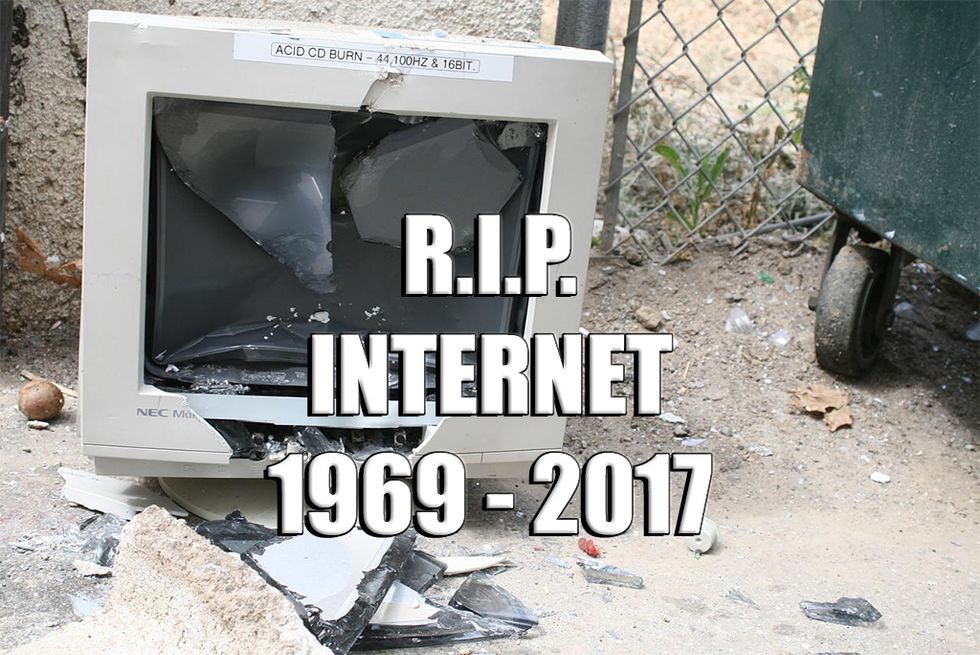 Today, Ajit Pai, the former Verizon lawyer picked by Trump to run the FCC, killed net neutrality. Pai said that after receiving millions of comments from consumers and talking to small businesses, he's confident that allowing corporations to control access to the Internet is a good idea. Advocates for repealing net neutrality call this a "light-touch" regulatory approach, because they are stupid.

A Serious Critique Of Net Neutrality By Serious Donald Trump, Who Is Serious

The FCC is now bending over to the help poor Internet and phone companies who are hurt by their needy customers whining about fairness.

The public comments for the FCC's "consideration" of repealing net neutrality was inundated by a deluge of trolls and bots. First, the comment system was knocked offline by a DDoS attack and the FCC not only denied the attack, stating that it had no "written documentation," but it later refused to investigate the attack. After nerds began ripping apart their patchy neckbeards, the nonpartisan Government Accountability Office said it would investigate the millions of fake submissions, but Pai really doesn't care that it's almost impossible to find real statements submitted by actual people.

Damn, Brandy, GET A JOB!

I want to emphasize how these comments are fucked. With the aid of New York AG Eric Schneiderman's FCC fake comment search engine, I started counting how many times a name appeared with the same auto-form comments. Every few days, the name "Brandy Doyle" managed to submit about a dozen comments, for a total of 260 comments. This leads to two conclusions: Either Brandy has way too much free time, or Brandy is a spambot. Fucking Brandy.

I trawled for hours looking for real comments and found enough spam to feed every Hawaiian for decades. The New York attorney general released some of his findings, finding two million potential stolen identities, with 5,000 confirmed stolen identities, many of them belonging to the sick, elderly or the dead.

Donald Trump vs The Time Bandits

As with everything Ajit Pai touches, it gets worse. Independent studies have found that over 7 million comments were from domains like FakeMailGenerator.com, and another 444,938 were from Russian and European email addresses.

FCC Chair Wants You To Sit Down And Shut Up About Net Neutrality, Everything Else

Ajit Pai has screwed over jailbirds, the incarcerated, and now he's coming after the Internet.

Trump's FCC Commissioner working to ensure no internet for dirty poors, hits the ground running. Are we tired of winning yet?

None of this matters to Pai. He laughs everything off as a Hollywood smear campaign perpetrated by Cher and the Hulk, hysteria driven hate-clicks pushed by George Takei to deprive people of a freedom we already have. According to Pai, he's giving the corporationspeople the freedom they used to have before Obama came along and gave us exactly what we asked for.

In an effort to quell the very real fear from consumers, technologists, journalists, dissidents, and people not on the payroll of telecoms, Pai says that he's spoken with many ISPs, and they're promising not to throttle or install fast-lanes for their customers. He even announced a partnership with the Federal Trade Commission to monitor ISPs to make sure that ISPs don't lie and start screwing their customers.

This is, of course, bullshit as they've already been caught violating the laws and principles behind net neutrality statutes. Telecoms were legally barred from throttling people, but that didn't stop Verizon from purposefully throttling customers binging on Netflix. Once the vote for the rule change was announced, Comcast deleted its "no paid priotitization" pledge from its website. By removing this pledge Comcast was proactively shielding itself from violating FTC rules.

Trump's FCC wants to screw the Internet AND poor people just in time for Christmas, Hanukkah, and Festivus.

"Unfortunately, I realize we do not address that at all. If the ISP is transparent about blocking legal content, there is nothing the [Federal Trade Commission] can do about it unless the FTC determines it was done for anti-competitive reasons. Allowing such blocking is not in the public interest."

The two Democratic FCC commissioners, Mignon Clyburn and Jessica Rosenworcel, haven't sat idly by as Pai screws around. Rosenworcel has called for public hearings and an investigation to ferret out what happened and hear from real people. Clyburn has grabbed a bullhorn and been protesting on the streets of DC, recently telling reporters,

"Show me the data. Show me the information you can point to where the 2015 rules, which evolved from a set of principles that we've had for a number of years, have been a barrier to innovation and investment. And then we'll have a conversation, not a minute before."

So far 39 Senators and 117 House members have called on Pai to stop the repeal of net neutrality. Last night Colorado Republican Rep. Mike Coffman came out and joined half a dozen Republicans in their skepticism of Pai's claims, so there will be none of this "partisan issue" nonsense.

Pai might joke about being Verizon's "manchurian candidate," and even dance with pizzagater proponents at the Daily Caller, but the issue of net neutrality is not over. Instead of being fought behind closed doors in DC, the fight will likely move to the US Court of Appeals, potentially setting up a Supreme Court showdown. Expect a flurry of legal proceedings against ISPs from consumer advocacy groups, and 2018 Congressional hopefuls making this a cornerstone their platform, provided they aren't getting dark money Super PAC contributions.

Wonkette will never throttle you. Who are we kidding, of course we will. Sign up to give us money today!