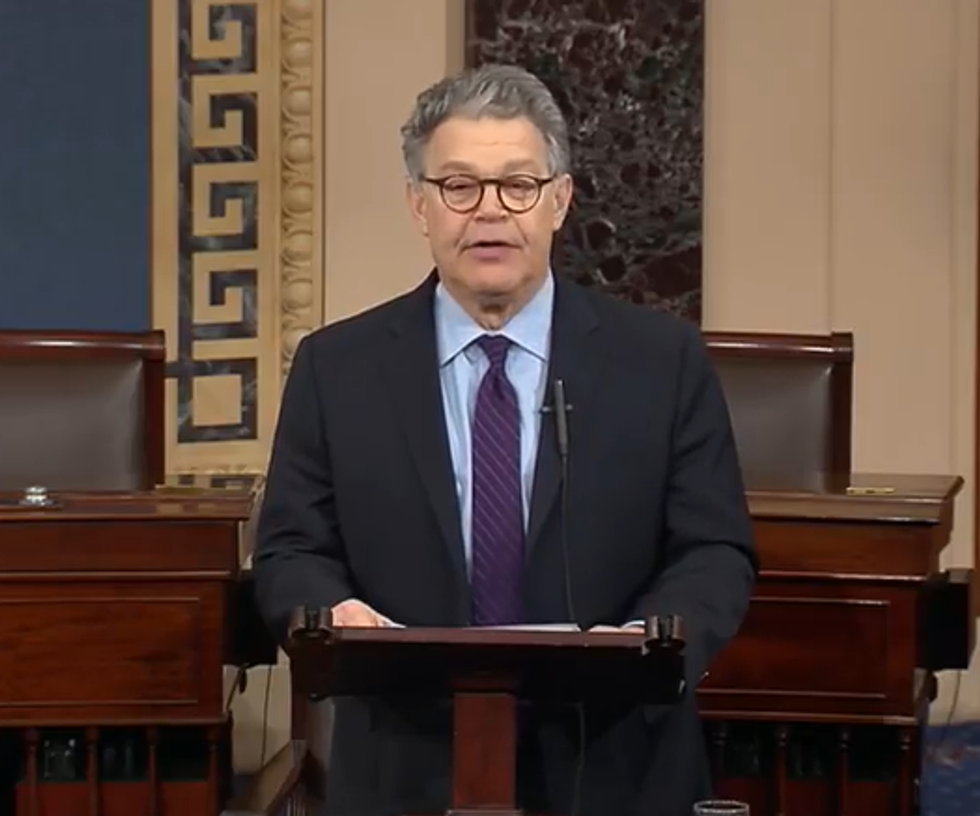 Al Franken has just announced he will be resigning from the Senate in the coming weeks. His announcement came a day after a majority of his fellow Democratic senators decided that yeah, if they are going to have the moral high ground over a party led by an admitted sexual predator, a party that's currently keeping a Senate seat warm for a man credibly accused of molesting children, they have to walk their talk. So Franken will go.

We know many Democrats have mixed feelings and emotions about this, and that's OK. Nobody said the cultural shift happening right now was going to be comfortable.

Franken began his speech by saying how happy he is this conversation about sexual harassment and assault is happening, and he seemed a bit frustrated that the conversation had turned to him. Franken, for the record, still denies some of the allegations against him, and said he remembers other encounters "differently." But, he said, "all women deserve to be heard and their experiences taken seriously." We'll co-sign that.

I, of all people, am aware that there is some irony in the fact that I am leaving while a man who has bragged on tape about his history of sexual assault sits in the Oval Office, and a man who has repeatedly preyed on young girls campaigns for the Senate with the full support of his party ...

It's a valid point. To be clear, Republicans will not stop ignoring motherfuckers like Donald Trump and Blake Farenthold and Roy Moore, and they will not hesitate to campaign against the Democrats' "Al Franken problem." As the Moore race has shown us, many in the GOP clearly believe it would be OK for a candidate to fuck a child in the middle of 5th Avenue, because hey, at least their candidate isn't a DEMOCRAT.

Here's hoping Democratic candidates in 2018 are ready for all this. The Wall Street Journal editorial board seems to think Democrats know exactly what they're doing right now:

It is not hard to see what is going on here. The Democrats are creating a Frankenmoore nightmare for Donald Trump. Monday brought Mr. Trump’s [Roy] Moore endorsement, followed by a commitment of support from the Republican National Committee. The next day, Rep. John Conyers stepped down from his House seat, clearly under pressure from fellow Democrats.

This is what the state of play looks like: The Democrats are eliminating their stains, while the Republicans are endorsing theirs. You have to believe in magic to think this is going to end well for Republicans.

Do you believe in magic? We'll see.

Here are a couple more quotes from Franken's announcement:

“Serving in the United States Senate has been the honor of my life,” Franken said, choking up as he read his remarks, and vowing to stay active in public life. “I may be resigning my seat, but I’m not giving up my voice.” [...]

“I know the work I’ve been able to do has made people’s lives better,” he said. “Even today, on the worst day of my political life, it has been worth it.”

Minnesota Governor Mark Dayton will appoint a replacement for now (it's expected to be current Minnesota Lt. Gov. Tina Smith), and in November of 2018, there will be a proper special election for the rest of Franken's term. If the GOP is lucky, Roy Moore might have a Bible-believing Christian friend in Minnesota who likes to fuck children who could be convinced to answer the call of duty and run.

Regardless of who the GOP runs, we will beat that person's ass. (With votes!)