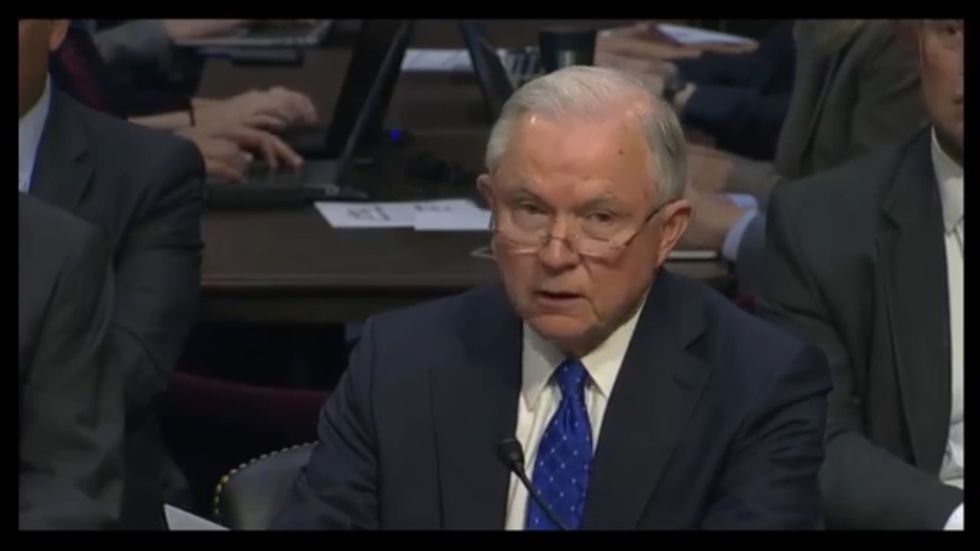 Attorney General Jefferson Cracker Barrel Sessions appeared before the Senate Judiciary Committee on Wednesday, and boy howdy, it was fun. (We know, it's Friday, and we're just getting to it now. WE WERE BUSY.) OK actually no it really wasn't fun. Sessions made news when he said he'd be open to jailing journalists, to which we reply, "Oh fuck you, you little racist troll doll from the slave state section of hell."

What we noticed about the hearing, though, is that Sessions seems halfway vaguely sentient (grading on a curve, of course) when he's talking about literally anything besides his contacts with Russia. When he talks about deportin' them Messicans or What About Black On Black Crime, his little elfin face lights up because racism is his favorite.

But ask the man about Russia? Well dadgummit, his poor little brain just shuts off! To be fair, Sessions really didn't seem to be in the mood to answer any questions (WaPo has a good round-up of all the questions he didn't answer), but his thin little lips really closed up tight when he was asked about anything that might suggest he's complicit in Donald Trump's obstruction of justice in the Russia investigation or about his own possible collaboration with Russians during the Trump campaign.

The most fun part of the hearing was when Al Franken questioned Sessions. Remember when Kamala Harris got poor Jefferson Butterscotch all flustered and nervous, because she was talkin' too fast? This was like that, only Al Franken-style.

You see, long ago during Sessions's confirmation hearing, he flat out lied to Franken about his Russian contacts, in response to a question Franken did not ask. After news came out that yes, Old Butterbeans had met with the Russian ambassador several times, Sessions suddenly recalled those meetings but claimed they had nothing to do with the campaign. It was just for sex, we guess.

Well NOW, Jeff Sessions doesn't remember AT ALL what those Russian ambassador meetings were about, and he's rootin' tootin' mad at Franken for rudely asking him about it.

Franken told THE WHOLE STORY about Sessions and his ever-changing excuses, with names and dates and times, and noted that Sessions keeps moving the goalposts on what the "truth" is. A sample:

FRANKEN: First it was "I did not have communications with Russians," which was not true. Then it was "I never met with any Russians to discuss any political campaign," which may or may not be true. Now it's "I did not discuss interference with the campaign," which further narrows your initial blanket denial about meeting with the Russians. Since you have qualified your denial to say that you did not "discuss issues of the campaign with Russians," what in your view constitutes "issues of the campaign"?

Not for Jeff Sessions! You see, he is a dumb old white man who gets his back up somethin' FIERCE when he feels like he's being accused of doing something improper, so he had to reclaim his tattered dignity:

SESSIONS: Well lemme just say this without hesitation, that I conducted no improper cam- -- or discussions with Russians at any time regarding a campaign or any other item facing this country. I wanna say that first! That's been the suggestion that you've raised and others! That there was somehow we had conversations that were improper. That's number one!

At this point Franken tried to cut in because that's not what he fucking asked. But OH NO, Jeff Sessions had more WORDS TO POOP FROM HIS YOKEL FACE SLIT:

SESSIONS: No no no, you had a long time, Senator Franken! I'd like to respond!

After Franken noted that Ted Cruz (ugh) had gone two minutes over his time, therefore he didn't want his time eaten up by Jeff Sessions filibustering with his Deliverance banjo bullshit, Sessions got his little dumbass back up even further:

SESSIONS: No, Mister Chairman, I don't have to sit in here and listen to his, uh, charges without having a chance to respond. GIMME A BREAK!

Sessions then explained for many more minutes that Franken was being mean, still not answering any questions about why his Russian stories keep changing. After his soliloquy, Franken noted to Chairman Chuck Grassley that Sessions had just wasted a whole bunch more of his time, to which Sessions protested, "I DIDN'T TAKE AS MUCH TIME AS SENATOR FRANKEN TOOK!"

When Franken finally got to talk again, he focused on Sessions's testimony to Senator Pat Leahy in the same hearing, specifically that Sessions now CANNOT RECALL what he talked to the Russian ambassador about:

SESSIONS: What I would say to you is ... you go and make a lot of allegations, Senator, it's hard for me to respond in the time I've got!

FRANKEN, TO GRASSLEY: CAN I HAVE A LITTLE MORE TIME? BECAUSE THIS MAGIC RACIST ELFIN SHITHEAD OVER HERE STONEWALLS LIKE NOTHING I HAVE EVER SEEN.

OK maybe that was not Franken's exact quote.

Franken went through the litany again, and Sessions finally answered his question, just kidding he filibustered more. Sure seems like the little white supremacist cocktail weenie has something to hide!

SESSIONS: So he gets to do about ten minutes of improperly framing this subject and I'm given a short chance to respond?

Sessions ultimately insisted he is a VERY GOOD BOY, answered exactly zero of Al Franken's questions, and ended with a few verses of "Old MacDonald Had A Farm" until UH OH TIME'S UP!

It was a very productive hearing.