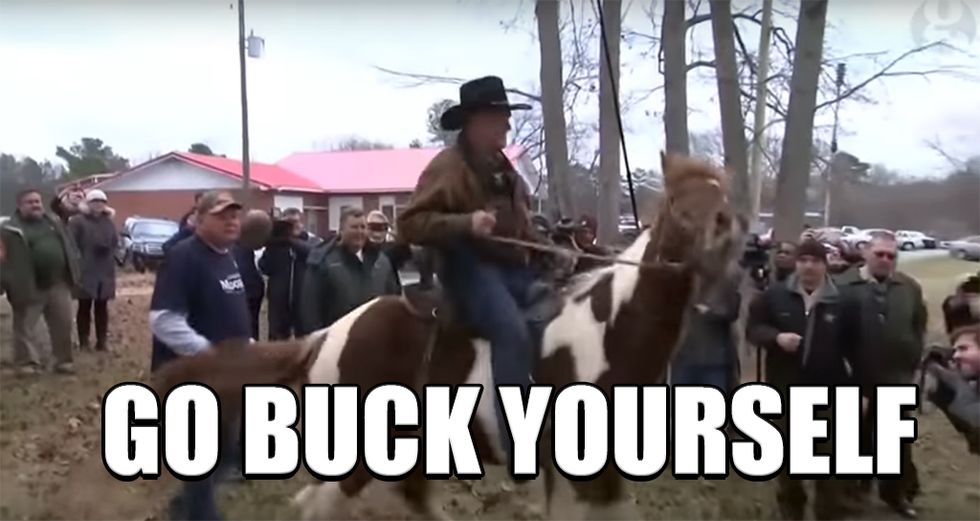 Doug Jones won the Alabama special election last night, 50-48. However, Roy Moore, bigoted ALLEGED pedophile, has declined to concede the election, vowing to leave this up to GOD and the Jew lawyers.

Trump's lawyer Ty Cobb says that Robert Mueller is done interviewing current and former White House officials, prompting one attorney representing a senior Trump official to comment,"Are you fucking kidding me...[that is] nonsensical, but it may be the most useful thing he can say to keep the president from going overboard and to keep the wheels on the bus."

The DAMNING statements made by the former agents on Mueller's team who were fired were that Trump is "awful," an "idiot"; included their dislike of Bernie Sanders and Trump's dick; called Martin O'Malley a "douche"; and said it's been "long suspected" that Ohio Gov. John Kasich is gay.

Using those text messages, Trumpkins and Republicans are hoping to crucify the DOJ and the FBI as "deep state" threats to Trump's consolidation of power.

DJTJ's lawyer is bitching about an investigation into the House committee investigating Trump-Russian fuckery after Democrats called out his bullshit claims of attorney-client privilege.

The rumor mill on the Hill is that Republicans want to lower taxes for the super rich to 37 percent, but they're still having trouble ironing out just how badly to reward corporate donors while fucking over the poor.

Republicans are hoping to ram through their the Trump/Ryan tax cuts (for the super rich) and have them take effect by Jan. 1, 2018, which could have immediate effects on workers who rely on subway passes, moving expenses, grad school waivers, pretty much every deduction taken by a small business, to say nothing of the currently unwritten fuckery for corporations.

As Trump's "Down-the-Middle Guy," Lindsey Graham is acting as a bridge between Trump and the Hill in trying to cobble together a DACA deal.

According to a report on the report on the 2011 Euro banking crisis, Trump's Commerce Secretary Wilbur Ross sold off his stake in an Irish bank he knew was lying about its books, and now European officials are accusing Ross of insider trading.

REXXON emerged from hibernation to note that news of his untimely REXIT was "laughable." Later, during a chat with a DC think tank he noted his willingness to talk to North Korea without pre-conditions, believing he left "the door ajar" to "talk about the weather" or "whether it’s going to be a square table or a round table."

Diplomats who attended a closed door meeting with REXXON are pissed he's taking credit for their efforts to preserve the world from plunging into chaos, and his comments that Russian-occupied territory in Ukraine is the biggest thing hindering US-Russian relations. This fucking guy.

A Kentucky state Republican Rep. accused of raping a 17-year-old girl at a 2012 New Year's Eve party while acting as her preacher is refusing to step down, and instead he's singing hymns as he denies the allegations as the song of the season, stating "people want to go back over my entire life."

A federal judge has ordered that convict, pedophile and former Republican House Speaker Dennis Hastert never be left alone with a child. Ya fucking think?

The owner of a radio station on the outskirts of DC is butthurt about being forced to register as a foreign agent after he took a bunch of money to start broadcasting Radio Sputnik.

The former DC transit cop accused of being a Nazi sympathizer and attempting to aid ISIS is now on trial and it is just BONKERS!

A gay-hating preacher in Jacksonville, Florida, has some tips to avoid that "flaming foo-foo fruit loop" waiter. (ProTip: This doesn't work!)

James O'Keefe's prodigy and faux-journo Laura Loomer did an AMA on Reddit and Goddamn was it pathetic!

Jake Tapper left a Roy Moore talking head speechless after he schooled him about the law when Moore's spox starting whining about touching the Quran.

Civil rights activist and podcaster extraordinaire DeRay McKesson is suing Jeanine Pirro for making false statements on Fox and Friends back in September.

The USA Today Editorial board published a SCATHING op-ed condemning Trump, saying "A president who would all but call Sen. Kirsten Gillibrand a whore is not fit to clean the toilets in the Barack Obama Presidential Library or to shine the shoes of George W. Bush."

And here's your late night wrap-up! Stephen Colbert can't believe the pedo got bucked; Jimmy Kimmel had thoughts on Roy Moore; Seth Meyers had a couple of things to say to Kayla More about JJEEWWSS; The Daily Show talked about how the Trump tax cuts (for the super rich) just don't add up.

Want more newses? Give us money to help us pay for stuff!