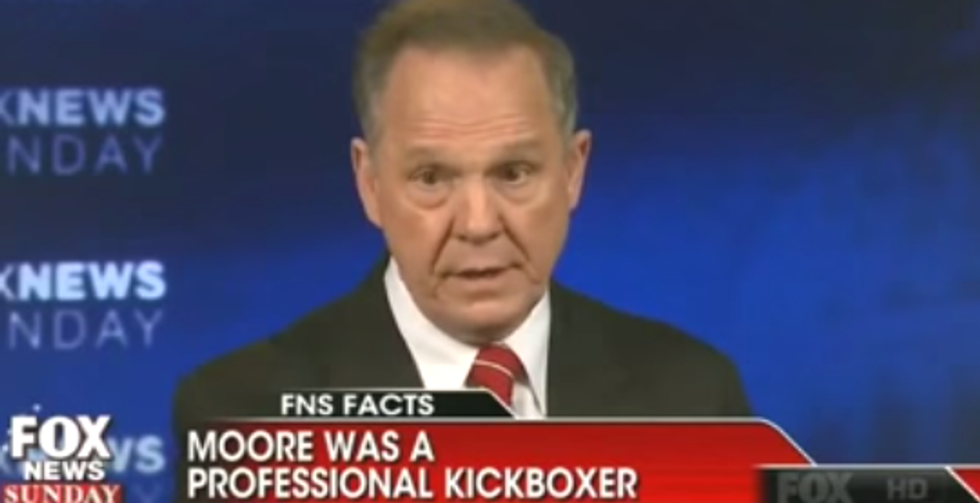 America's most esteemed jurist, Alabama Supreme Court Justice Roy Moore, is not giving up his fight to save Alabama from the hordes of gays currently destroying the state by having equal marriage rights. Even though a terrible federal judge named Callie V.S. Granade (sounds like GRENADE because she GRENADED opposite marriage) not only ruled Alabama's marriage amendment unconstitutional, but also had the audacity to order probate judges to actually DO WHAT SHE SAID, and even though the Supreme Court was okay with all of this, Roy Moore wants everybody to know that he will be forced to defy a Supreme Court ruling in favor of gayness, because "organic law" and Jesus:

Under Justice Moore’s urging, many Alabama counties defied both a federal judge’s ruling throwing out the state’s gay marriage ban and the U.S. Supreme Court’s refusal to delay the beginning of same-sex marriages last Monday.

The U.S. Supreme Court will hear April arguments on whether state gay marriage bans violate the Constitution’s guarantee of equal treatment under the law. A ruling is expected in June.

“This power over marriage, which came from God under our organic law, is not to be redefined by the United States Supreme Court or any federal court,” Justice Moore told “Fox News Sunday.”

Ha ha, Reuters, SCOTUS rulings are "considered" the last word. Maybe to dumb liberals who don't understand that America existed before the actual founding of America, in God's Heart, and the Almighty has already banned gay marriage, in the Bible. When Wonkette finds the Bible verse that says that, we will update this post with a citation, honest, we're sure it's in there somewhere.

Your Wonkette never ceases to be amused by all these new God laws that wingnuts make up, every time the Real Law tells them to go to hell. Many of the National Organization for Marriage goons continually refer to "natural law," as if that is a thing that exists, and now we have "organic law" from Roy Moore. Is it also free-range? Is it like organic chicken and beef, which you know half the time doesn't even mean anything? Will dumb yuppies start abiding by "organic" law because they think it sounds healthier?

A smirking Chris Wallace reminds Moore that hey, didn't you lose your job for this same thing in 2003? Moore assures us that this is NOT the same, and also that he was totally right about the Ten Commandments thing, because the First Amendment, or something else maybe, that is the part of the interview where Moore's brain waves start to very visibly break into little, confused pieces.

Of course, Roy attempts to do that thing that anti-gay extremists do, that they inexplicably seem to think helps their side, by invoking pro-slavery and pro-segregation SCOTUS rulings, saying that treating black people as property and stuff along those lines is just the same as protecting LGBT people from discrimination. Doesn't make sense? Don't worry about it, these losers are just throwing any and every bit of poop they can find at the wall, just praying to their angry father in heaven that something, ANYTHING, will stick:

Asked about the Supreme Court possibly backing same-sex marriage, Justice Moore said: “They may do it, but they may do it wrongfully just like they did in” two 19th century rulings: the pro-slavery 1857 Dred Scott decision and the 1896 Plessy v. Ferguson ruling backing racial segregation.

“I would not be bound thereby” if the Supreme Court declares a right to gay marriage, Justice Moore said.

“I could recuse or dissent, as a justice from Delaware did in the Dred Scott case in 1857. They ruled black people were property. Should a court today obey such a ruling that is completely contradictory to the Constitution?” Justice Moore said.

It is so adorable when white Alabama wingnuts try to do Civil Rights talk.

And who, besides Roy Moore, even understands the Constitution? Not all those black-robed dumbs on the Supreme Court, and certainly not that mean federal judge who put Roy in this position in the first place.

So, when SCOTUS gays the whole country in June, Roy will appeal it directly to God (if God grants him standing, ha ha ha, he will probably lose on a technicality because he is stupid), who Roy hopes and prays is as big of a homophobe as he is. And if God somehow turns out not to be the petty goon fundamentalists make him out to be, and thus upholds the Supreme Court's ruling, Roy Moore will appeal to ROY MOORE, who clearly defined marriage at the beginning of time as the union of one wingnut man and his chattel ladywife, and finally America will be saved from the homosexual revolution, the end.