Alaskan Idiot: Obama Is Of 'Mulatto Race,' Thus Not Eligible For Presidency 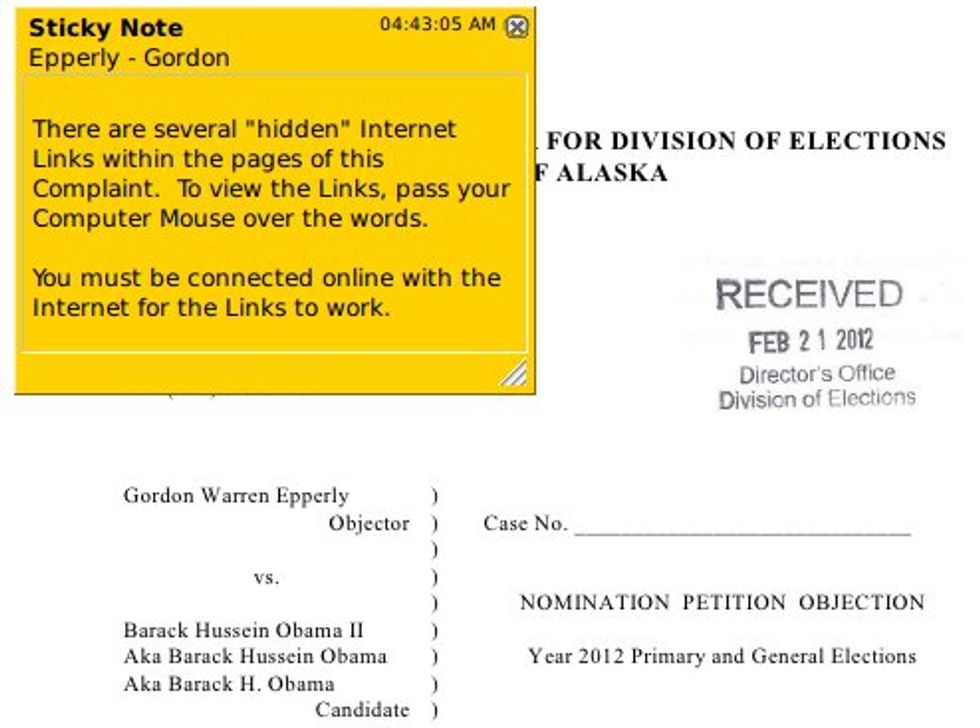 Mr. Gordon Warren Epperly -- of the PO Box 34358, Juneau, Alaska Epperlies -- can expect a lengthy and almost certainly inappropriate phone call from pearlescent loony Orly Taitz, and maybe, too, an honorary DDS/JD she will print on discontinued "Certificate of Participation" cardstock from the Office Depot. What in blazes for, you may ask. It's because Epperly isreally pushing the envelope on goofball schemes to invalidate Kenyan interloper Barack Obama's entire presidency/personhood, using our liberal activist court system, naturally. Whereas Dr. Orly Taitz, Esquire, settled for making up some nonsense about Obama not being born on real American soil to real American parents, Epperly is straight-up skipping that bit of politesse, to crow in the general direction of the Alaska State Division of Elections, "BUNK THAT! THAT PRESIDENT IS NOT WHITE, Y'ALL!!!"

Epperly is trying to prevent Obama from appearing on the ballot in Alaska, because of the Constitution, a sacred and unalterable document which, in his estimation, only gave "Negroes" and "mulattos" civil rights, not political rights:

This goes on for ten pages, folks, which is about ten pages past our attention span. So help us out, would-be Orly Taitzes. Are the rest of the arguments in Epperly's filing as totally impregnable as this one? More importantly, was the Fourteenth Amendment only purportedly ratified and how is this going to screw up the numbering on all the following amendments (if any of them are even valid)? [Turning Left]