Alex Jones Having Conniption About Something Or Other, We Don't Know 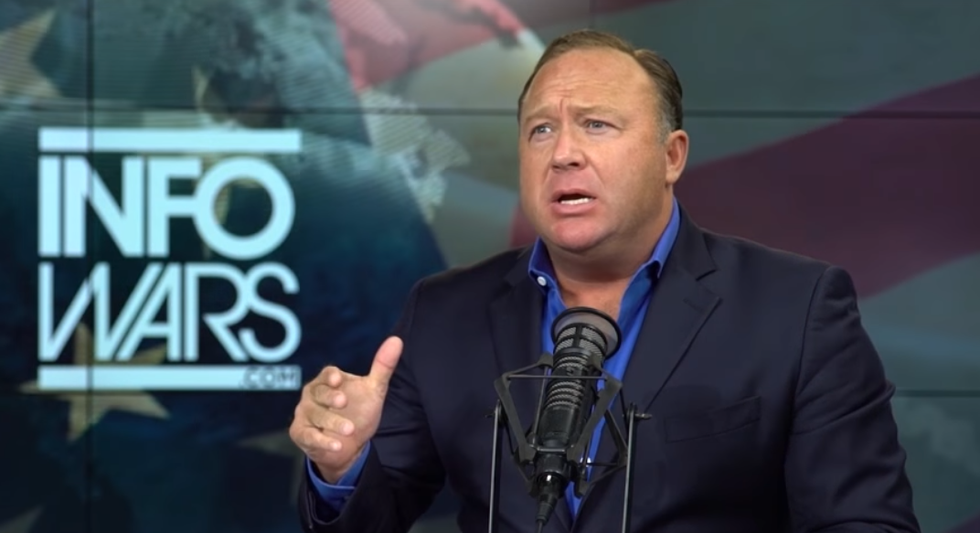 Alex Jones is having a tantrum again, everyone. Yes, mere days after he broke blood vessels in rage over how House Intelligence Committee Democratic ranking member Adam Schiff is a hot hunk of gay venison, and he wants to beat him up, Jones is angry again, because apparently he's not supposed to make threats against elected officials. He will probably have to take his shirt off and rub Texas BBQ (which is not the best BBQ in America, #BBQFact) all over his ugly nipples again, in order to get over his latest personal catastrophe, which is that Democrats (GRR!) are calling (SAYS WHO?) for him to be arrested (LIKE WHAT????), just for threatening a sitting U.S. congressman.

[wonkbar]<a href="http://www.wonkette.com/615081/alex-jones-is-cussin-mad-at-rep-adam-schiff-and-his-cocksucking-eyes"></a>[/wonkbar]Dearest Alex 'splains in the video below that the Democrats and the foreigns and the newspapers and the Beyoncés (there are thousands of them, and they are in an army led by Barack Obama, according to Jones) are trying to assassinate Donald Trump. This is why it is "ridiculous," he says, that they are calling for Alex Jones, sane man, to be arrested. He then plays clips of Madonna saying that dumb thing she said about blowing up the White House and Robert DeNiro saying he wants to do fisticuffs to Trump, and some rando on Twitter actually threatening assassination, which is NOT ALLOWED, TWITTER RANDO. This is America, where we get rid of presidents by making them resign in shame for (allegedly!) colluding with Russia to steal elections.

Jones notes that he is actually "one of the biggest proponents for non-violence and Mahatma Gandhi and Martin Luther King," unlike common liberal newspaper Beyoncé DeNiros, who just go around killing the president. Are you excited to watch the video yet? Because we can tell you more.

[wonkbar]<a href="http://www.wonkette.com/602633/is-obama-activating-million-beyonce-army-to-make-him-dictator-for-life-probably"></a>[/wonkbar]You see, some have interpreted Jones's unhinged rant about Adam Schiff as an actual threat, because apparently they don't understand that Alex Jones is too much of a pussy to yell like that at ANYBODY'S face, much less the doe-eyed face of Adam Schiff. They have misinterpreted Alex Jones so! He notes that his InfoWars program is an "art performance" and a "form of art," and adds that Schiff is a "chicken neck." The point is that INFOWARS is not a place of violence, because they WAR you with INFO, which is very different from all the other people, who always do assassinations to the president.

Quick reminder, here is what Jones said about Adam Schiff:

listen you son of a bitch, what the fuck’s your problem? You want to sit here and say that I’m a goddamn, fucking Russian. You get in my face with that I’ll beat your goddamn ass, you son of a bitch. You piece of shit. You fucking goddamn fucker. Listen fuckhead, you have fucking crossed a line. Get that through your goddamn fucking head. Stop pushing your shit. You’re the people that have fucked this country over and gangraped the shit out of it and lost an election. So stop shooting your mouth off claiming I’m the enemy. You got that you goddamn son of a bitch? Fill your hand. I’m sorry, but I’m done. You start calling me a foreign agent, those are fucking fighting words. Excuse me.

Those are fighting words! But the point is that they are WORDS, and Alex Jones wants to beat Adam Schiff's goddamn ass, that son of a bitch, that piece of shit, that fucking goddamn fucker, that fuckhead who fucking crossed a line, that known gang-raper of America, WITH INFORMATION THOUGHTS AND WORDS, so why are hypocritical Democrats so upset?

For the record, Jones MAYHAPS MIGHT HAVE broken a law, as Newsweek explains:

... [S]ays an attorney with expertise in federal law, Jones’s threats appear to break a federal law, U.S. Code Title 18, Section 115, which makes it illegal to threaten to assault a U.S. official and provides a penalty of up to six years in prison.

“I do think that the combination of Jones’s comments would amount to a threat,” says Amanda Berman, director of legal affairs with Lawfare Project, a consortium of experts on national security law. “It seems to be a clear provocation. Ultimately, the question would have to be put to a judge or jury, but I think there is a legal basis for a conviction based on Jones’s threat, which was made ‘with intent to impede, intimidate or interfere’ with Congressman Schiff’s exercise of his duties as the ranking member of the committee investigating the connection between the Trump campaign/administration and the Russians.”

UH OH, Alex Jones's man nipples might end up in the pokey! And you know who the wardens at the pokey are? That's right, it is some of Obama's army of Beyoncés, and we hear they are VERY STRICT AND UNKIND.

There were 12 more minutes in the video before we got bored with Alex Jones's pussy loser "art," but you can watch it if you have no life.

Wonkette is funded by YOU. So hey you, click below, to fund us!