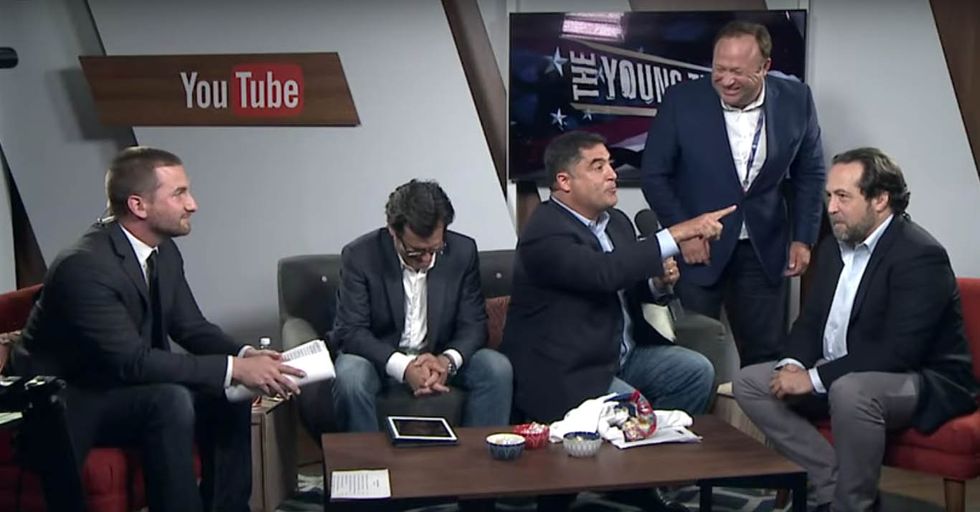 This is literally the definition of a shitshow

Sane, rational adults tend to avoid the weird, freaky fringe media groups that only exist in the never-ending echo-chamber of the Internet because they're populated by giant man-babies who will say and do anything for attention. This includes ultraleft mouthpieces like Cenk Uygur of The Young Turks, and Alex Jones, a complete fucking crazy person who spews conspiracy theories while canoodling with Nixonian hatchet men and Trumpkins. Obviously, when you throw enough of crazy people into a confined space, like Cleveland's Q. Arena during the Republican National Convention, you're bound to get a couple of assholes having a sissy fight.

Alex Jones and his little cadre of infants say that Uygur and his crew become "triggered" after they passed by the set of The Young Turks. One of Uygur's crew spit iced-tea in Jones's face, then left before Uygur could justifiably beat the bejesus out of Jones for being an obnoxious, lizard-loving Trumpkin.

Uygur and his crew maintain that Jones invaded their set while they were filming an episode of The Young Turks, and purposefully started a fight. Jones asks Uygur a few stupid, loaded questions, then pokes and presents Uygur one of their dumb-ass anti-Hillary t-shirts (we'll spare you the description, fuck Alex Jones). Uygur gets upset, and a producer tries to shut everything down. Jones calls the producer "Jihadi Jane," and then all hell breaks loose.

Uygur gets all up in Jones's face after some stupid crap about Saudi Arabia, and that's when tricky Dick Nixon's own personal sleaze machine, Roger Stone, oozes out of nowhere. Stone starts shouting obscene nonsense in an obvious attempt to incite physical violence before scuttling back to the disease-infested sludge he slithered out from.

Roger Stone, you may remember, signed on with Donald Trump a while ago, and promised to disrupt anti-Trump events at the RNC months ago. He was eventually booted "out of" Trump's campaign and yet Trump's kept him around because he's besties with Paul Manafort, and a good hatchet man can always come in handy when you're two-bit hustler trying to con your way out of debt and into power.

This is the point where yr Wonkette pauses to remind you that both Alex Jones and Cenk Uygur are total jerkoffs, but in different ways, and no one should listen to a word they say.

Poor man has a schmuck between his shoulders.