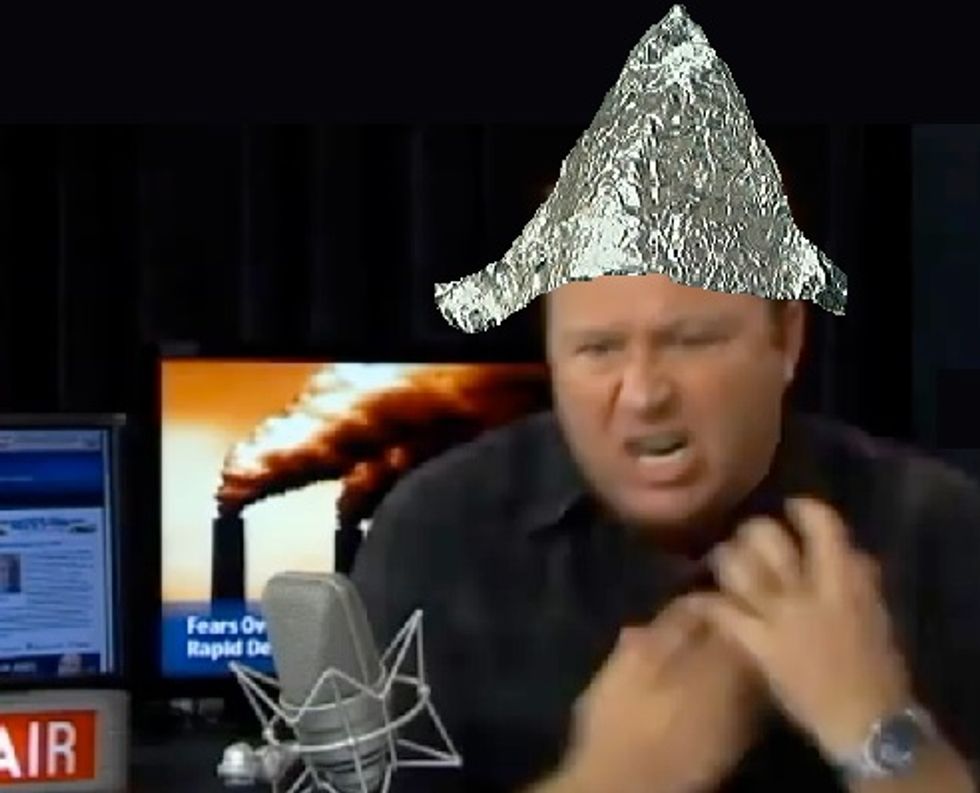 Facebook has recently started a new fact-checking program to help keep "fake news" from spreading on the site, and right-wingers and conspiracy nuts are MAD! Particularly because they plan to use fact-checkers from sites like Snopes and Politifact to determine the legitimacy of stories -- and the prevailing "wisdom" among rightwing nutjobs is that these sites are totally biased in favor of liberals. Which is possibly true but only to the extent that liberals do not regularly create bizarre conspiracy theories about how random pizza places are actually child sex slavery rings. Frankly, we are just a lot more boring than that.

Alex Jones has, of course, been on the very forefront of this movement against the movement against fake news. He has even gone so far as to create his own list of "fake news" sites, which includes all of the places that publish real news (like Wonkette!) instead of weird rants about gay frogs.

He's also made a handy dandy infographic to let you know which sites are the most trustworthy and freedom loving! Like the Russian state media!

He has even gone so far as to claim that "they" are crucifying him. Because now he's Jesus or something.

Jones is now saying that if Facebook goes through with this dastardly plan -- and labels him as "fake news" and doesn't do the same for The New York Times -- HE WILL SUE!

In explaining why The New York Times is fake news, Jones cites a recent incident in which an ad for a fake news story claiming Alec Baldwin died ironically popped up as an ad in a New York Times story about fake news.

This is a thing that, unfortunately, happens pretty often -- and the easiest way of explaining it is that most ads you see on websites have been bought "in bulk" rather than directly from advertisers -- meaning that they don't have much control over what ads come up on their site. If one appears that you have a problem with, you can ask that it not be shown on your site, but it would be very difficult to vet every ad shown to every visitor. This often leads to embarrassing incidents, like the Alec Baldwin one. I've had some myself. To suggest that the Times had anything to do with that ad showing up is disingenuous and the reason why InfoWars has a reputation for "fake news" in the first place.

He is also claiming that this whole "War on Fake News" is part of a CIA plot, probably because they don't want anyone catching on to their plans to turn all the frogs gay. He now wants Trump to defund the CIA, in order to prevent this. It's also part of a United Nations plot, he says, because sure, why not!

Citing a Business Insider article explaining that the program will start out with a beta test in which users can report fake news stories and hoaxes, and then third-party fact-checkers will confirm, label it as such and "demote it" in the news feed, Jones implored his followers to somehow get in on this test by creating "a fake liberal network" on the site and then labeling stories by CNN and MSNBC as fake. Which, I guess, will totally thwart this whole process or something.

Jones claims that this is the end of the free internet, and that the site is basically Communist China now because they are burying "the news." However, there is a big difference between "burying the news" and labeling hoaxes as hoaxes.

Frankly, it's very likely less of a "CENSORSHIP!" thing, and more of a money thing. Most websites these days are fairly dependent on Facebook for traffic, and traffic is the way they make money. No Facebook, no money.

The problem with the proliferation of fake news, honestly, has a lot to do with the way Facebook decides what should go in your news feed to begin with. When a site publishes an article, and a bunch of people who see it click on it and engage with it when they see it (liking, commenting), Facebook deems that article as important enough to show other people. If that doesn't happen, it kind of disappears. Websites like Infowars publish inflammatory articles that make people go "Woah, what's that about?" and then go ahead and click on it immediately. Even people who may later say "Oh, that's some bullshit." But the fact that they click on it in the first place means that Facebook is going to show it to more people who may not go "Oh, that's some bullshit."

The time was once when the "Facebook Firehose" showered down more often and more kindly on media outlets, a time when most of what you published to the site would show up in the feeds of your followers -- not so anymore! These days, Facebook wants sites to pay them money in order to simply show posts to a larger percentage of the people who have liked their page. No money, no page views, no sweet, sweet advertising bucks.

Thus, a good way to rake in the dough without paying a Facebook ransom is to have wildly inflammatory and misleading headlines and news stories. That's why fake news sites created by teenagers in Macedonia are reeling in a lot more money than nice, honest sites like Wonkette.

Quite frankly, if Facebook really wants to combat fake news, they need to simultaneously promote real news. They can't do that if they keep the algorithm the way it is, and requiring media outlets to pay a ransom in order to show their articles to the people who follow them. Without that, the whole thing is a pretty meaningless gesture.

But in the meantime, if you would like to help combat the spread of fake news, go to our Facebook page and make sure you are "following" us. If you really love us, you can even click "see first" so you get to see Wonkette before anything else, even. Then share share share, or Facebook will decide you don't want to actually see our stories even though you signed up to see our stories, because did we mention they are ransoming us? (The editrix tells me Facebook traffic is down 75 percent after the recent algorithm change when Facebook decided nobody wants to actually see news stories.)

But that's all fine because FACEBOOK IS THE BEST and WE LOVE FACEBOOK and they DEFINITELY SHOULDN'T THROTTLE US ANYMORE, because THEY ARE GREAT. Or whatever.