Alex Pareene Remembers None Of His Time At Yr Wonkette 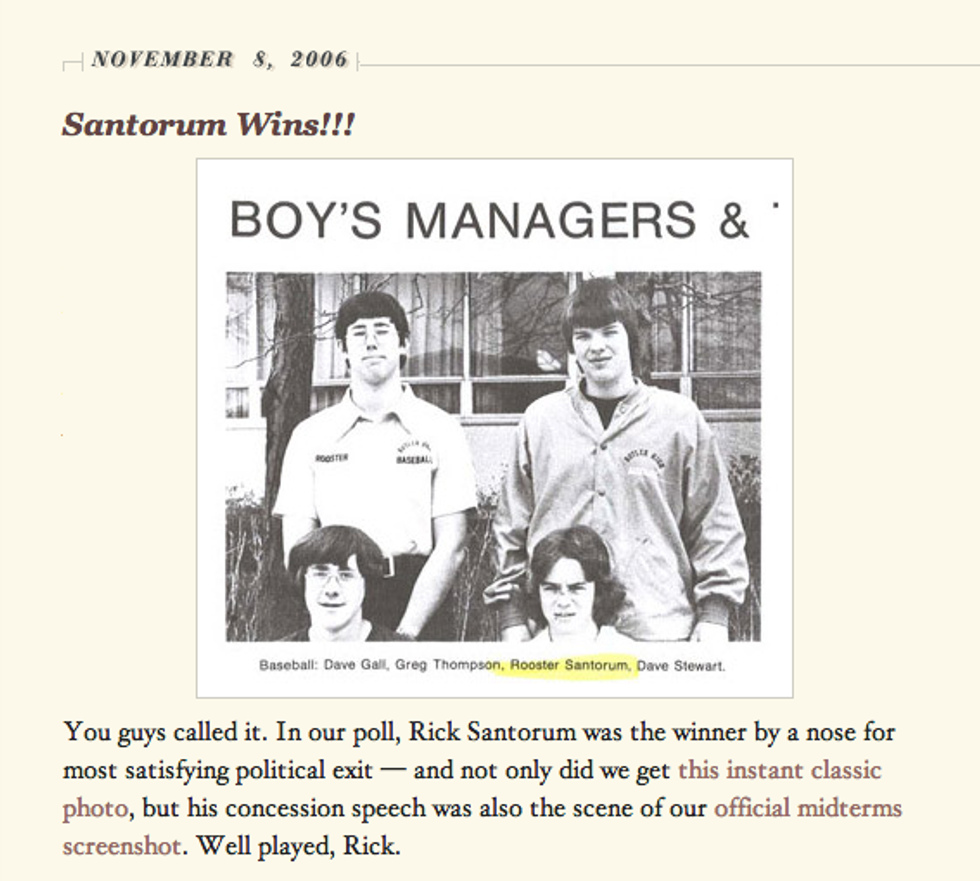 A thousand years ago, in 2006, I joined Wonkette.com as co-editor alongside David Lat. We were not very good at this job, and Lat wisely quit a few months laterto go do things he actually was interested in instead. I continued on. I was ten years old and had no clue what I was doing as editor of Wonkette.com, the famous Political Gossip Website. Did it show? (Yes, it did.)

Thankfully all the archives and links and images from those rotten days are broken so it's impossible to actually find most of the inane shit I wrote. Someday every link to everything I've ever written will meet the same fate -- fellow internet writers, I hope you're printing your favorite work out on some heavy paper stock, because do you really think Thought Catalog Dot Com is going to keep its domain registration and hosting up-to-date and paid-for forever? Not that printing it out would have helped me make sense of a one-paragraph late-afternoon post making fun of some long-deleted Dana Milbank "web video" seven years years after its publication. Still, my beloved photo of Denny Hastert and George W. Bush in lab coats, lost in time, like tears in the rain... time to die.

As I was writing this, I went back to the Internet Archive Wayback Machine to remind myself of what exactly I was doing every day. I was apparently complaining about having a cold (I was probably hungover) and posting a bunch of photos of people pointing at a model of a space ship that looked a bit like a penis. Did I... invent Buzzfeed?

Sometimes I just posted photos of some party I went to with Liz Gorman and I would not actually name anyone in the photos because I hadn't talked to them. Why would I want to talk to these garbage people? One of them might be Mark Penn! Then-owner Nick Denton's only instruction for the editors of his Washington Political Gossip Blog -- an instruction he repeated on numerous occasions -- was always that we should uncover and report who in Washington is gay and who has bad breath. It turned out that basically everyone was gay, if I am remembering the 2006 midterms correctly We never figured out the bad breath one. Let's say Tucker Carlson.

Back in those days, Wonkette cared about so many people who are all completely forgotten now. Many of them are even already out of jail. Remember when Josh Marshall kept writing about David Safavian? We wrote some stuff about him. Do you remember who that is? Does the name even ring a bell? Here is a funny picture of Rick Santorum -- jesus, we all thought we'd never hear about that guy again after 2006. And now he is going to be our next president. (Alternate angle of the famous "crying Santorums" family photo!) Remember George W. Bush? Here are several hundred blog posts that prove you are a total 2006-2007 kid!!!

Anyway, things picked up when Ken arrived. (Is Ken doing this too?) After the tenure of beloved founder Ana Marie Cox, Wonkette has always been best when written by people far, far away from Washington (SORRY NEWELL), which is a place that inculcates in its youth an insidious reticence to criticize people you will have to see/work for in the future. I mean I guess that happens in New York and Hollywood and Silicon Valley too. Basically everywhere your main options are suck up to power or starve. Someday soon we will all be replaced by the evil robot that invented ViralNova and all your favorite "funny" bloggers will be mining Warcraft gold and solving CAPTCHAs for spammers for a living so enjoy your little potty-mouth put-down party while it lasts, Wonketeers.

In conclusion, I ruined Wonkette, except for when I got Josh Fruhlinger to write for us, that was the best thing I did.