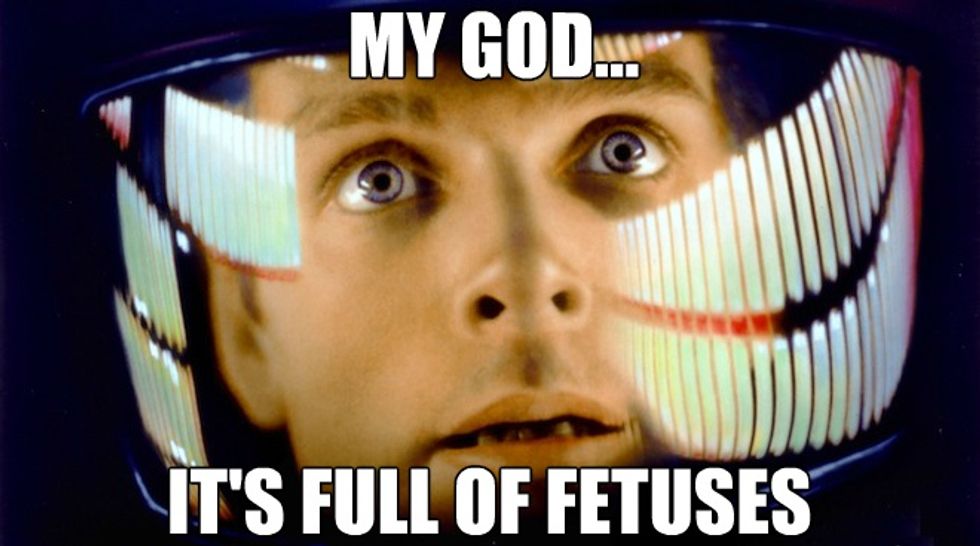 It's been just over a year since last summer's Great Big Fake Controversy broke, in which some lying liars claimed Planned Parenthood was supposedly selling baby human fetus parts at the local Fetus Locker. Except for how it was all a lot of hooey, as investigation after investigation found, no wrongdoing by Planned parenthood in any of the ninety jillion states that looked into it (more precisely, that would be 12 state investigations, plus another four by Congress). And despite the fact that there was no "there" there, a bunch of states and even Congress decided to punish Planned Parenthood for what it had been falsely accused of, and tried to cut its funding. Plus, a deranged good guy with a gun murdered three people at a Colorado Planned Parenthood to stop the baby parts sales that were never happening in the first place.

One criminal prosecution -- in addition to the murder trial of the guy motivated by the outright lies -- did come out of the whole trumped-up "investigation" of the nonscandal at Planned parenthood: the James O'Keefe wannabees behind the videos, David Daleiden and Sandra Merritt, were charged with multiple crimes in January after a Texas grand jury decided Planned Parenthood had done nothing wrong, but the video makers had. Working under the name "The Center for Medical Progress -- which was not a center, medical, or progressive -- Daleiden and Merritt were indicted for using fake IDs to gain access to Planned Parenthood offices, as well as with the very felony they accused Planned Parenthood of, attempted purchase and sale of human organs, since they were posing as researchers who wanted to buy some black-market fetal parts at the Planned Parenthood drive-up 'Bortion Parts window. Daleiden was even looking forward to going to prison so he could be a martyr for the pro- mandatory birth movement.

Sadly, a Texas judge ruined their plans for martyrdom and dropped the last remaining charges against the pair Tuesday:

District Judge Brock Thomas dismissed the tampering with government records charges against David Daleiden, 27, and Sandra Merritt, 63, at the request of the Harris County prosecutor's office, which determined that the grand jury had exceeded its authority by investigating the activists after clearing Planned Parenthood of wrongdoing.

"The grand jury took the investigation where the facts led it, however Texas law limits what can be investigated after a grand jury extension order is issued," Dist. Atty. Devon Anderson said in a statement. "In light of this and after careful research and review, this office dismissed the indictments."

Merritt and Daleiden had previously refused plea deals that would have given them probation, because they were sure they had done nothing wrong, what with being on a mission from God to save the babbies. Their attorneys had also argued they never should have been charged, which is what attorneys do. And as it turns out, the charges were dropped on a big ol' technicality:

Mr. Daleiden’s lawyers had sought to have the case thrown out because the indictments came during an extension of its term. They argued the grand jury did not have the authority to indict Mr. Daleiden and Ms. Merritt during the so-called holdover period, and prosecutors appeared to have agreed.

So once the grand jury's original term had expired, the extended time allowed for determining whether Planned Parenthood had broken the law did not allow them to bring a new matter: i.e., whether Daleiden and Merritt, in pursuing their fake investigation of Planned Parenthood, had broken any laws.

Not surprisingly, David Daleiden declared himself vindicated and totally on God's side in doing a bit of fraud for the sake of the greater good:

"I'm glad the 1st ​​​​Amendment rights of all citizen journalists have been vindicated today," Daleiden said after the hearing. "And I would just note that Planned Parenthood is still under investigation by the United States Congress, as they should be, because they are the real criminals in this matter."

Let us once again note the charges were dismissed based on a technicality involving when the grand jury indicted the fraudsters. It was not based in their First Amendment rights as "journalists" or their guilt or innocence. And while it's true that congressional Republicans will probably "investigate" Planned Parenthood as many times as they "investigated" Benghazi, they haven't turned up one iota of evidence that the organization has broken any laws.

Dan Cogdell, Merritt's attorney, was at least more realistic about the outcome's meaning, although he included the mandatory points-scoring:

"As long as my client gets a dismissal, I don't care what they call it," he said. "But she really was not guilty."

Planned Parenthood Gulf Coast, the target of some of the bogus videos, issued a statement emphasizing that Daleiden and Merritt were not exonerated of anything:

President and CEO Melaney Linton said that Planned Parenthood "has been cleared of any wrongdoing time and again," and that activists like Daleiden "spent three years creating a fake company, creating fake identities, and lying."

"When they couldn't find any improper or illegal activity, they made it up ... in order to advance their anti-abortion agenda. The decision to drop the prosecution on a technicality does not negate the fact that the only people who engaged in wrongdoing are the extremists behind this fraud."

Even though Daleiden lucked out Tuesday, his "Center for Medical Progress" still faces lawsuits filed by the National Abortion Federation and by Planned Parenthood. Nonetheless, the outcome of the Texas case is expected to result in Daleiden and Merritt receiving some kind of award from some wingnut organization in recognition of their complete vindication, as well as renewed calls to halt Planned Parenthood's nonexistent trafficking in under-the table Fetus McNuggets.