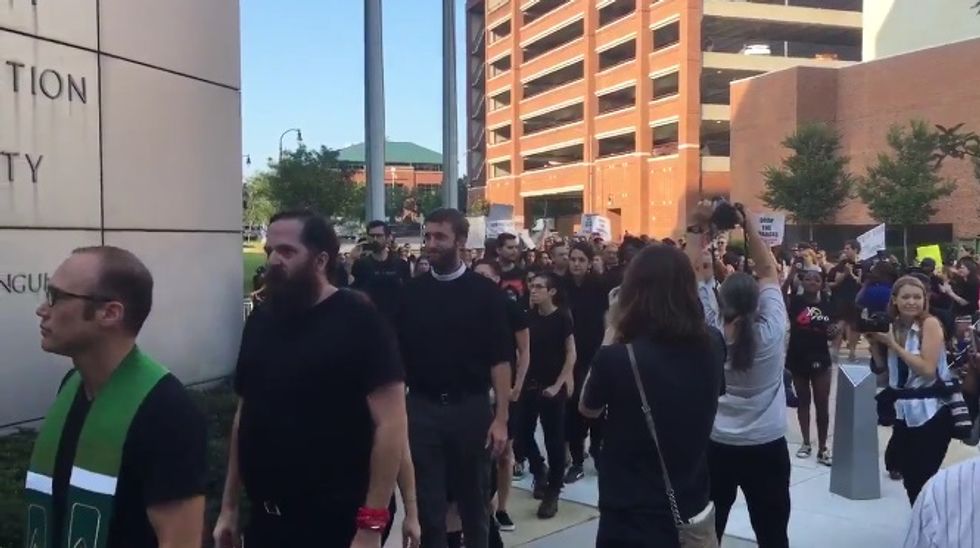 You can't be Spartacus. You don't look anything likeCarol Channing

To protest the arrests of eight people charged in the destruction of that tacky 1924 Confederate soldier statue outside the former county courthouse in Durham, North Carolina, a crowd of activists demanded today that they also be arrested for the statue's destruction. As a large crowd cheered them on, about 100 people lined up in front of the Durham County Detention Facility in hopes of joining their friends in jail. Unfortunately, the authorities refused to arrest them, on the technicality that no warrants had been issued for their detention. Still, it made for some happy nice times!

Yes, that's a theological seminary getting all SJW on Twitter. Good for them!

Walking in to sheriffs office to collectively turn ourselves to say: targeting racial justice organizers? arrest me too! pic.twitter.com/YtTTDEQv20

Confederate Statues Going In Ashbin Of History, Just Like The Confederacy. Sad, We're Sure!

As we said t'other day, Yr Wonkette remains a House Divided on the wisdom of vigilante destruction of Confederate monuments -- Yr Editrix is all for it, Yr Dok Zoom thinks it sets a bad precedent and is likely to make Bad People feel justified in doing Bad Things, and Yr Evan is busy helping his doggo not freak out about a thunderstorm in Memphis and has not been polled on the matter. But we can all get behind this orderly mob's insistence on being arrested and joining their comrades, because it's a fine nonviolent way of Trolling the System.

The movie comparison was obvious to everyone:

So would you call this Civil Excessive Obedience?

Someone is wrong on the internet, and it's the president's lawyer.

It's looking like Confederate monuments -- however "beautiful" our idiot president thinks they are -- are going to be coming down in a lot more places, and the sooner the better. We're not so sure Donald Trump has much room to complain about the removal of "beautiful art," given his own legacy of jackhammering lovely old Art Deco friezes off the historic Bonwit Teller building on the site of Trump Tower in 1980, breaking a pledge he'd made to carefully remove them and donate them to the Metropolitan Museum of Art. The original New York Times story on the demolition includes a statement from "John Barron" -- Trump himself -- insisting that "the merit of these stones was not great enough to justify the effort to save them." So that's a whole passel of Trump being a lying bastard in a single episode, huh?

Maybe Trump has the right idea about history, though. Don't think too much about it, and if you don't have any real history available, make some up. (We'll have a full story on the Bonwit-Teller demolition and Trump's Fake History for you tomorrow!)

Stay safe, kids, and now it's your OPEN THREAD.