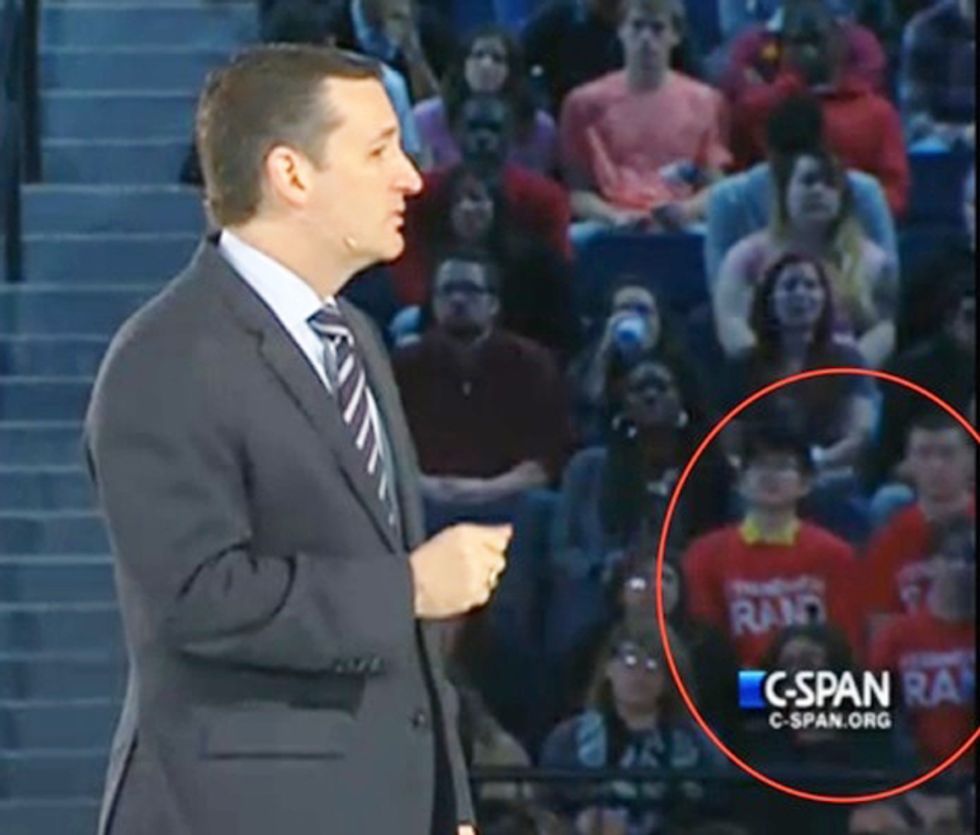 Ted Cruz is ready to take America down the Jesus Road to national salvation, and some people are more excited about that than others. On the one hand, you have your Tea Party Nation, which declares Cruz "the only electable Republican" because he's very smart and is "not handcuffed with the consultant class" that has kept Real Conservatives from winning the GOP nomination, and hence the presidency. And then there are fans of other candidates, like the Liberty University students in the photo above, who wore their "Stand With Rand" t-shirts for Rand Paul and made a point of sitting in the front row.

David Bossie, the head of Citizens United (sounds familiar for some reason) is pretty chuffed about the announcement, telling Newsmax that Ted Cruz "speaks truth to power." Presumably this means that he lies to the head of NASA about what the space agency's mission is, promises to "repeal" Common Core, even though it isn't actually a law, and is generally full of shit. (Also, when did the right wing decide to adopt the phrase "speaking truth to power," which we're pretty sure is trademarked by Radical Ethnic Studies professors, and our benevolent Editrix's mom, in the first place?) Fun fact: Of 42 Cruz statements checked by Politifact -- and yes, we know Politifact is far from perfect -- only one received an unambiguous rating of "true." Truth to power? The guy has trouble speaking truth to anyone.

Over at Dead Breitbart's Home For Spittle-Flecked Computer Monitors, there was a certain amount of premature rejoiculation:

The comments, which you should never read anywhere but Wonkette (where they aren't allowed), are a strange mix of birther arguments over Cruz's eligibility and favorable comparisons of the Cruz family to those people currently occupying OUR White House. We'll give Senator Cruz this much: the kiddos are cute, even the one who was such a Jerk Baby a few years back.

Not all the students in the Liberty University crowd were delighted with the event, because apparently even Born Again Christian college students like griping on social media, bless their hearts. A few choice comments from the anonymous Yik Yak app (what? Liberty students not revealing their identity while using their phones at a mandatory event?):

In addition to students, there were some other, more high-profile grumbles about Cruz's candidacy. Rep. Peter "I'm the less crazy one who doesn't talk about cantaloupes" King said he didn't think Cruz is an especially credible candidate:

"Shutting down the federal government and reading Dr. Seuss on the Senate floor are the marks of a carnival barker not the leader of the free world," King said in a written statement on Monday.

Now that's just not fair -- we've never seen a carnival barker do either of those things, and we think Rep. King owes an apology, and possibly a hit of meth, to decent honest carnies everywhere.

White House Press Secretary Josh Earnest had the best comment so far about Cruz's promise to repeal every single word of Obamacare:

“There was a presidential candidate who ran in 2012 promising to repeal the Affordable Care Act, and that campaign pledge didn’t work out very well for him.”

And Gawker noted that website URLs aren't the only difficulties Cruz is having with his campaign rollout:

But the most enthusiastic Cruz supporter we've seen so far has to be the New Stupidest Man On The Internet, Chuck C. Johnson, who probably needs a change of underpants by now:

So there you go. Guy's a statesman, and no less an expert than Chuck C. Johnson has certified him.