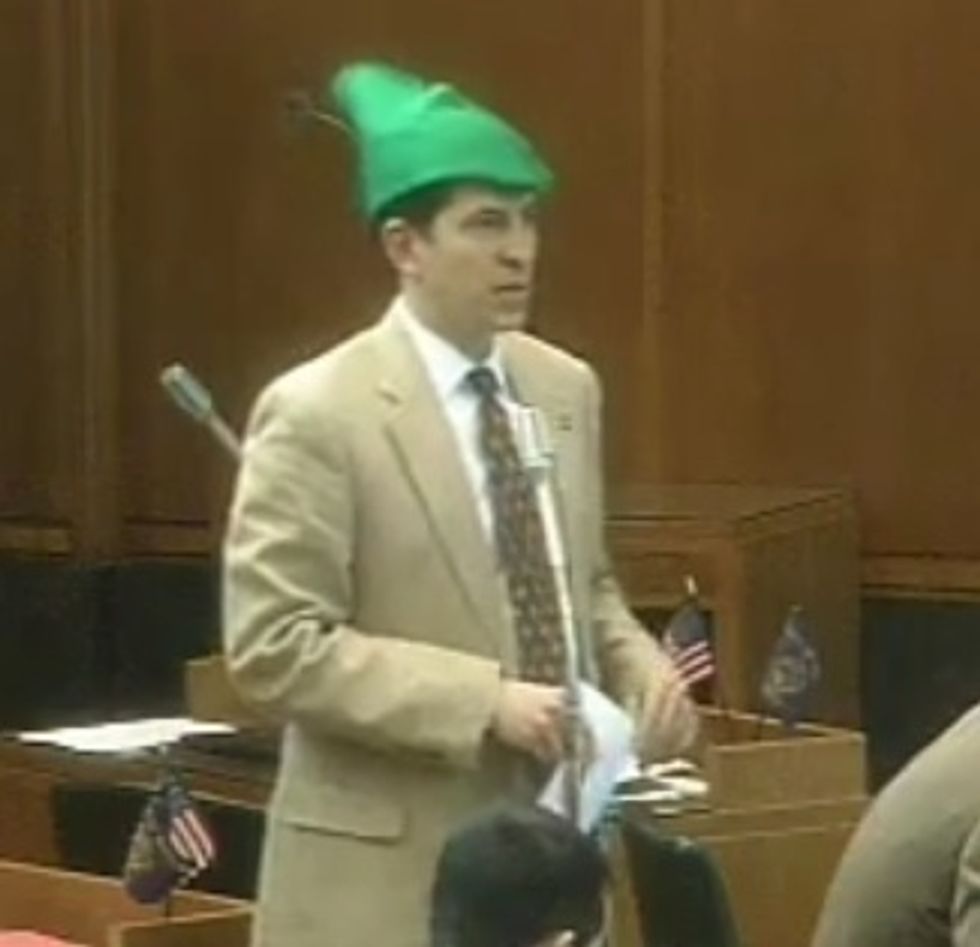 The spring season of political sex scandals, like the presidential campaigns, like the bland and uninspired bickering of Congress, like the campaign ads' lack of demon sheep, masturbating witches and Basil Marceaux, are so boring that we are sharing this tale of a dim Oregon GOP lawmaker who had consensual, heterosexual sex with his staffer: "A former aide to Deputy House Republican Leader Matt Wingard (R-Wilsonville) has accused him of giving her alcohol when she was underage, pressuring her to have sex, and keeping her on the public payroll after she ended the relationship with him and stopped reporting for work." In reality this still sounds pretty bad, but your Wonkette was not sold until we came across the above picture of Wingard wearing a silly hat to work. This is how actual editorial processes work in professional newsrooms. (News editor: "Eh, kill the story unless there are good pictures." Chief photo editor/intern slave: "We have one of the guy fellating a corn dog." News editor: "Great, I'll put a reporter on it.") This makes it a good enough process for your Wonkette. Anyhow, Wingard has now resigned his leadership post in shame. Hooray!

None of our above commentary-rant is to detract from the fine muckracking done by Portland's Willamette Week in its story on Wingard, however:

According to the DOJ report, the woman says Wingard gave a speech at the party, and later “the two had a conversation wherein she jokingly stated he should hire her.”

Wingard did hire her in early 2010. Not long after, at the age of 20, she attended the Dorchester Conference, the annual GOP gathering in Seaside. She told a Clackamas County Sheriff’s Office investigator Wingard gave her beer and “was persistent that she drink the beer.” She said she felt “dizzy” after drinking a beer and a half.

“Her legs began to feel numb, and she began to lose feeling in her body,” the sheriff’s report says.

She told the sheriff’s investigator that Wingard later invited her by text message to his room, where she found him “in his bed with his shirt off.”

The woman told investigators she can’t remember what happened after that.

“She said the next thing she knew she woke up in the morning and was in Rep. Wingard’s bed under the covers, but was fully clothed,” the DOJ report says. “She said Wingard was next to her on top of the covers, clothed as well.”

After that, she told DOJ investigators, Wingard “pursued her by constantly asking her out for drinks [and] dinner and sending her text messages. She said on several occasions he asked her to send dirty (sexual) text messages to him. She said she agreed to do this because she felt if she didn’t he would not talk to her and it made her work environment hostile.”

Wingard resigned his post as Deputy House Leader but not his seat in the wake of the allegations. He is also a terrible human who beats his child with screwdrivers and he should be eaten by dragons. [Willamette Week/Oregon Live]