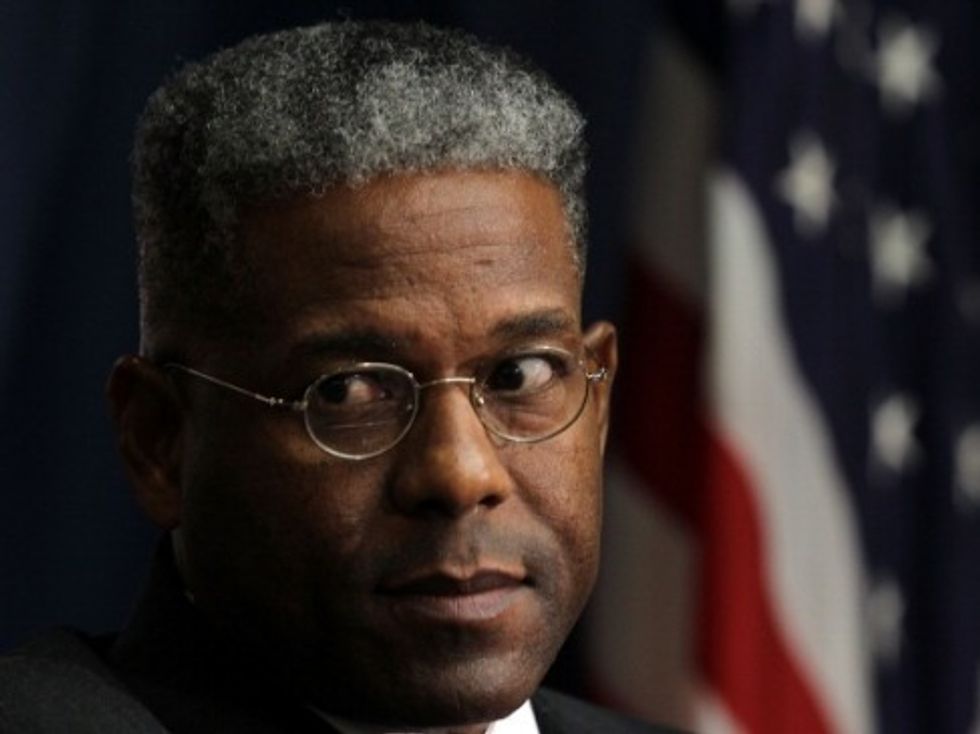 Congressman Allen West hates it when black people play the race card. Hates it so much, that when they play it,he plays it right back, just to show 'em.

He's the one who first put forward that Obamacare's 10-percent "tanning tax" was racist, for example, because, well, he's not doing any tanning, eh? More recently, he very courageously responded to fictional racism from Bill Maher by having a fundraising drive, and now... well, now the fight is even more dire.

There are more racists, you see, racistly using the race card for their racist ends. And they're very cleverly disguised — so well disguised, in fact, that to the ordinary voter might mistake his accusation for being incredibly stupid. But no, Voter, you'd be wrong. Those racists are the Congressional Black Caucus.

The ridiculous, pointless contempt vote against Attorney General Eric Holder was totally cool and not at all a silly GOP spectacle — but the Congressional Black Caucus walking out of the vote rather than simply voting against it, well, that's prejudiced, man. From West's Facebook:

Today the Congressional Black Caucus and other liberal Members of Congress judged the Attorney General by the color of his skin, and not by the content of his character. I am disappointed my colleagues would rather engage in a political stunt to distract the American people from knowing the truth behind the Attorney General’s disregard of the law and disrespect of congressional oversight to provide requested documents.

Oh, good. Liberals disagree with you about holding Holder in contempt? Say it's just because Holder is black, and paraphrase Martin Luther King when you do it — that'll help send it home. West also called the walk-out "a political stunt to distract the American people" without even a smidgen of irony; it's not clear whether any of his hysterical supporters had the nerve to send him an article from biased Marxist progressive liberal rag Fortune, which Thursday revealed that, uh, the whole "Fast and Furious" scandal is all made up:

Issa and others charge that the ATF intentionally allowed guns to walk as an operational tactic. But five law-enforcement agents directly involved in Fast and Furious tell Fortune that the ATF had no such tactic. They insist they never purposefully allowed guns to be illegally trafficked. Just the opposite: They say they seized weapons whenever they could but were hamstrung by prosecutors and weak laws, which stymied them at every turn.

Egad! What racism. If Holder were white, there is no stinking WAY Fortune would be trying to figure out what Darrel Issa has been utterly incapable of doing. The story makes ridiculous Jim Crow assertions like "the public case alleging that Voth and his colleagues walked guns is replete with distortions, errors, partial truths, and even some outright lies" and quotes racist government officials saying things like "Republican senators are whipping up the country into a psychotic frenzy with these reports that are patently false."

Don't you SEE it? Black people stood up against something they thought to be insulting, partisan political theater. What gall — Dr. King would be rolling in his grave. [Fortune via Mother Jones]