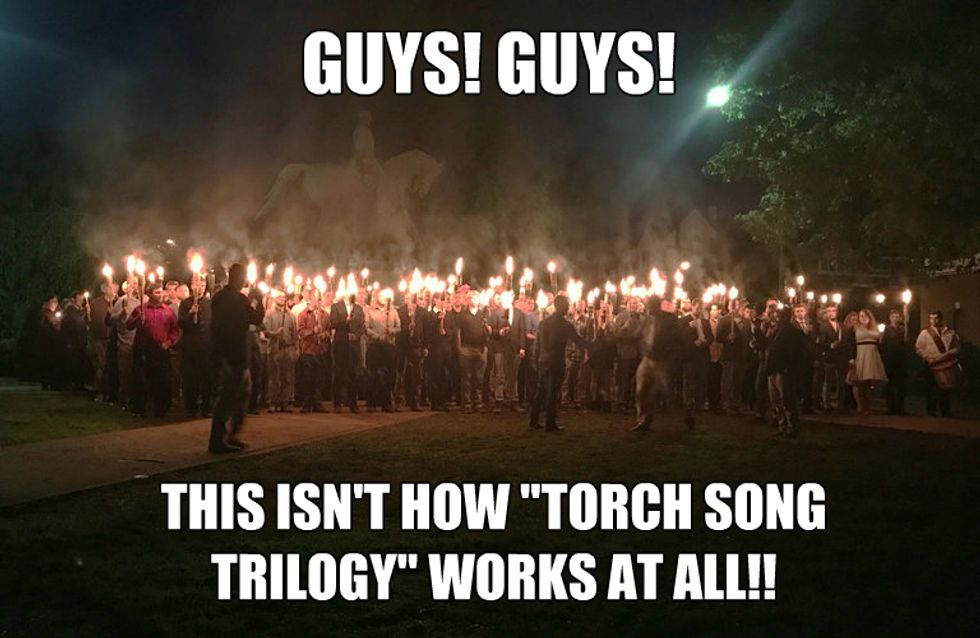 Fine, go ahead, but you're going to have to answer to Harvey Fierstein.

Richard Spencer, the face-punched goober who coined the term "alt-right" as a more Twitter-friendly term for "white supremacist lackwits," led him a big huge torchlight rally of several dozen likeminded idiots to protest the planned removal of a statue of Robert E. Lee in Charlottesville, Virginia, Saturday, for almost ten whole minutes before police told them to git on out of there. After the gathering in the aptly named Lee Park, Spencer

posted pictures and video from the gathering to social media that showed a phalanx of demonstrators holding Confederate battle flags and a banner proclaiming, “We will not be replaced.” Their chants, some of which were captured on video, included “Russia is our friend” and the Nazi-era slogan “blood and soil.”

Spencer and his Nazipals were protesting the Charlottesville City Council's vote in April to remove the statue and sell it; a circuit court judge has issued an injunction preventing the actual removal of the statue for six months. You know, instead of chanting about how nifty Russia and white skin is, maybe if these morons want to preserve the statue, they could hold a nice big fundraiser online to buy it and display it at the "alt-right's" headquarters, assuming Richard Spencer's mom has enough room in her basement.

This event involving torches at night in Lee Park was either profoundly ignorant or was designed to instill fear in our minority populations in a way that hearkens back to the days of the K.K.K.

The Washington Post notes the marchus interruptus was a follow-up to an earlier daylight rally, during which Spencer offered some very defiant slogans:

“What brings us together is that we are white, we are a people, we will not be replaced,” Spencer said at an afternoon protest, the first of two rallies he led in the town where he once attended the University of Virginia [...]

“You will not replace us. You will not destroy us,” Spencer said at the earlier rally, which he broadcast via Periscope video. “You cannot destroy us. We have awoken. We are here. We are never going away.”

The video, we should mention, was hilariously titled "It's going South!" We do not think "going south" means what he thinks it means, but it turned out to be accurate enough, what with the immediate dispersal of the torchlight parade, despite Spencer's declaration at the beginning of the video that it would be an "all-night" vigil. Oh, yes, this is where we say we love the First Amendment, but we'd add that a mob with torches is pretty clearly a danger to themselves and others, because Fire Bad.

Well shoot, guess nobody will remember the Civil War now.

Surprisingly enough, Spencer's little stunt did not draw any visible support from Corey Stewart, who's trying to win the Virginia Republican gubernatorial primary with a platform of bitching about the removal of Confederate monuments in Louisiana and elsewhere, since what New Orleans does is clearly the Virginia governor's bidniss. Possibly he wants to natter on about how Confederacy-humping is about heritage not hate, which is rather difficult to pull off when an actual I Heart Being a Racist dude is carrying a torch and a slavery flag for Robert E. Lee.

All four of the other candidates running for governor -- Gov. Terry McAuliffe is term-limited -- issued statements denouncing Spencer's little march. Former RNC chair Ed Gillespie tweeted, "The ugly display of divisive rhetoric and intimidation tactics in Charlottesville yesterday [...] does not reflect the thoughtfulness and tolerance I see in my fellow Virginians." State Sen. Frank Wagner went further in an email statement, saying of Spencer and his Bund of Bothers,

These people are racists. They don’t represent Virginia values. I condemn their actions and beliefs. I call on all Virginians who are involved in efforts to advocate for or against Virginia’s history to act responsibly and honorably.

There is no place for hate, fear or intimidation in Virginia. The display in Charlottesville is the last gasp of a disgusting ideology. In this commonwealth, our doors are open, our lights are on and we are welcome to everyone who shares a love for it, no matter who you are or where you’re from.

But for our money, the winner is former congressman Tom Periello, also a Democrat, who mocked Spencer on Twitter to his virtual face:

That's pretty sweet, and proves you don't need to be carrying a lit torch in your hand to inflict a nasty burn.

Oh, and about those torches: Looks like they'd be a big disappointment to the real Nazis, who at least knew how to put pitch on the end of a stick. These guys got their flammable jollies from the garden supplies department of Lowe's or True Value:

And for that matter, notes Culture Trip editor Chris Mohney, the Russians were not the Confederacy's friends, either. The more you know!

Yr Wonkette is burnin', we're burnin' for you, and we're reader supported. So click that "Donate" linky and send a token of your affection. Money's even better.