America-Hating Libs Murder Veterans Day Because They Fear Guns. Or Not. 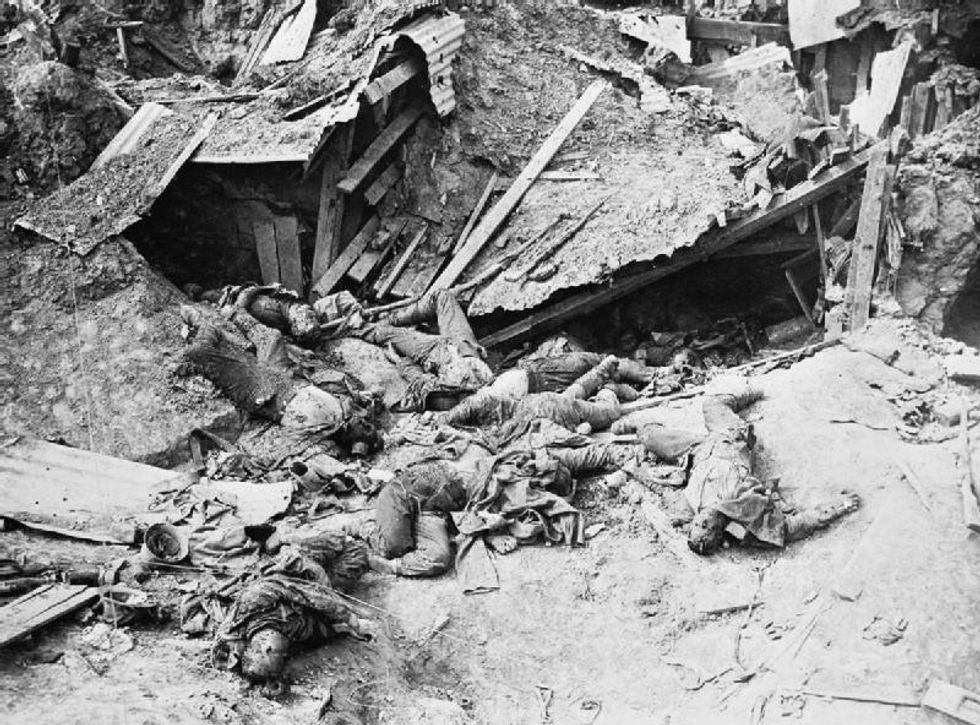 Thank heavens we've got a good Culture War overlay for your Veterans/Armistice/Remembrance Day, America. According to a number of rightwing websites, the gun-hating (and hence Freedom-hating) liberals in charge of the Eau Claire, Wisconsin, School District have completely cancelled Veterans Day programs, denying children of a chance to learn about what makes their country great.

The reality is a bit more prosaic: The schools asked for an end to a local patriot group to not include a 21-gun salute in that group's portion of the program, and the group decided it would go to a non-school location so they could fire their bangsticks.

Part of the problem is in a slightly overheated description of the situation by a very sad spokeslady for the Eau Claire Patriotic Council, compounded by ambiguous phrasing in coverage local teevee station WEAU:

For the first year, a local veterans group will not be holding a Veterans Day program at the Eau Claire area school district, the decision was because of a disagreement over firearms.

The Patriotic Council says it will not be able to teach younger generations about the sacrifices veterans have made this year because the organization isn't able to properly do so.

There are several different reasons cited, but one of the main concerns focuses around firearms on school grounds.

And yes, they really do have tape of a district spokesman, Tim Liebham, explaining the decision:

"We like to honor the veterans; we bring them in on a regular basis,” says Tim Libham, [sic] the Executive Director of Administration with the district. “There are just some conditions that we have to adhere to and the shooting of guns, even with blanks, is something we don't feel is appropriate given society, and the concerns that we have and that the community has, on school premises.”

Leibham says, “We'd had family and students that were uneasy, even with blanks being fired on school premise.”

Oh noes! The poor children will be prevented from learning anything about Veterans Day because the school system is freaked out over school shootings! Political Correctness run amok!

Thing is, as best we can tell, the Patriotic Council's presentation, with 21-gun salute, was only a part of the school system's Veterans Day program. Another local station, WQOW, has a somewhat clearer explanation, which gets into some of those "other reasons" that are only hinted at in the WEAU report:

Tim Leibham, from the Eau Claire Area School District, said, "We do have veteran programs virtually in all of our schools on veterans day. We have had in the past."

But, with scheduling conflicts and parents, who were concerned about a 21 gun salute, the school district had to put to rest a long time tradition that has been in place since the early 1930s.

Leibham said, "It was just this one presentation that was longer in length. It was 60 to 90 minutes. Specifically, we had children who either had an adverse reaction to the noise or precluded from being a part of the ceremony. We thought the needs of our children in our schools to be able to participate in those school activities would outweigh the 21 gun salute."

As a high school band nerd who hated being seated right in front of the drum section, we can sympathize with those kids who don't like the noise of rifle salutes. As Loud Noises expert Ralph Wiggum said, "Fireworks make my ears yell!"

OK, so apparently the Patriots Council felt that, without firing seven rifles three times, it's just impossible to convey anything to children about the nature of veterans' sacrifices, and so they took their guns and went to Burger King instead (yes, their alternate presentation was held at a Burger King. Make your own jokes about this whole story being a Whopper).

Yr Wonkette called the WEAU newsroom, where a nice lady confirmed that, yes, the local schools were still observing Veterans Day, and also, ours was roughly the eleventy-millionth call they'd received today on the matter.

Meanwhile, in the GunFondlerSphere, the story is being simplified down to "Gun-Fearing School Bureaucrats Cancel Veterans Day." EAG News tells its worried patriot readers, "Claiming an uneasiness over recent school shootings, bureaucrats at the Eau Claire School District canceled their annual Veterans’ Day Program over the traditional 21-gun salute." Red Alert Politics also has the school cancelling Veterans Day altogether, although it blamed the wimpy parents: "A Wisconsin school district cancelled its annual Veterans Day program after parents complained about the 21-gun salute traditionally a part of the festivities." You won't find many articles in the wingnuttosphere that point out that the only thing that was actually cut was the 21-gun salute, but really, that's not the point because if veterans can't teach about Veterans Day with a ceremonial volley of blank ammunition, America is over.

Sadly, we are also unaware of any school districts taking Kurt Vonnegut's advice on how to commemorate wars:

“Perhaps, when we remember wars, we should take off our clothes and paint ourselves blue and go on all fours all day long and grunt like pigs. That would surely be more appropriate than noble oratory and shows of flags and well-oiled guns.”

But what did he know, anyway? He didn't think massacres were worth celebrating either. Or maybe kids could learn about what a glorious thing war is by following WW II infantryman/journalist/cartoonist Bill Mauldin's 1945 instructions for the civilian on the homefront who wants an idea of what The Boys went through:

"Dig a hole in your back yard while it is raining. Sit in the hole until the water climbs up around your ankles. Pour cold mud down your shirt collar. Sit there for 48 hours, and, so there is no danger of your dozing off, imagine that a guy is sneaking around waiting for a chance to club you on the head or set your house on fire.

"Get out of the hole, fill a suitcase full of rocks, pick it up, put a shotgun in your other hand, and walk on the muddiest road you can find. Fall flat on your face every few minutes as you imagine big meteors streaking down to sock you.

"After 10 or 12 miles (remember -- you are still carrying the shotgun and suitcase) start sneaking through the wet brush. Imagine that somebody has booby-trapped your route with rattlesnakes which will bite you if you step on them. Give some friend a rifle and have him blast in your direction once in a while ... run like hell all the way back to your hole in the back yard, drop the suitcase and shotgun, and get in.

"If you repeat this performance every three days for several months you may begin to understand why an infantryman sometimes gets out of breath. But you still won't understand how he feels when things get tough.

Nah. Without a 21-gun salute, how will the kids ever understand that Veterans Day is really about the Second Amendment?