America Vs. the Sex Dwarves 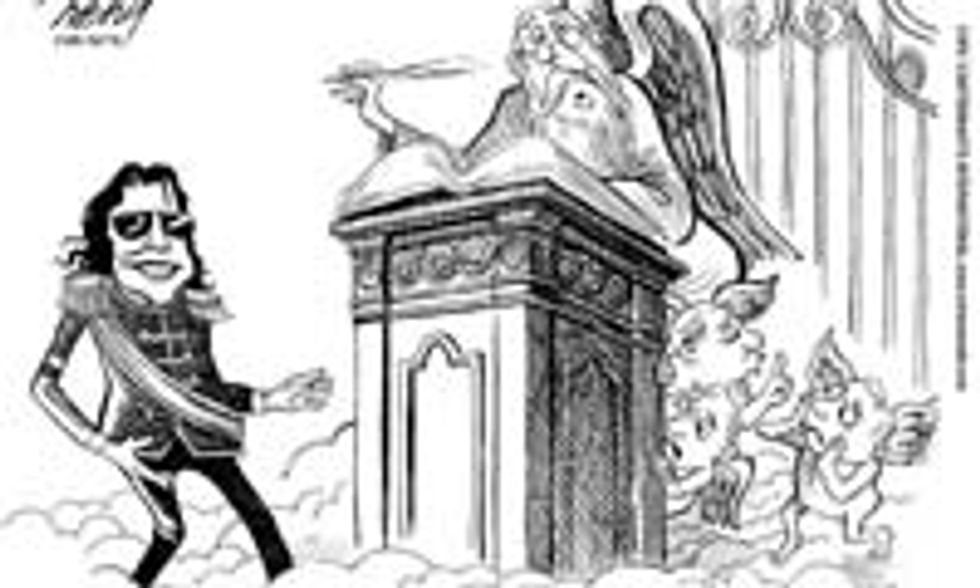 By the Comics Curmudgeon
Readers, your Comics Curmudgeon apologizes for missing last week's column, but you were all probably using alcohol, smoked meat products, and dangerous explosives to mask your self-loathing and economic despair and weren't watching the Interhoo anyway, were you? You probably didn't even notice that I was gone, after all I do for you, week after week ... [quiet sobbing] ... where was I? Oh, right, last week. Anyway, Sarah Palin quit and Michael Jackson died or whatever, so obviously this week's Cartoon Violence is all about sex perversions involving moose and little people.

Now, look, you can say what you want about Sarah Palin. Is she a quitter with delusions of grandeur? Yes! Does she combine willful ignorance, absolute self-certainty, and anti-elitist paranoia, and thus encapsulate everything wrong and terrible about the modern American character? You betcha! Did she steal a bunch of expensive clothes from the GOP and then irritate all the handlers that the party's grown-ups sent to manage her? Probably! Does she have sex with moose? Does she wake up next to a chain-smoking moose with a look like she's realized that she's done something terribly wrong with her life? Well, not literally, but if you take "moose" to mean Alaska and "have sex with" to mean "govern in a half-assed fashion for a little less than three years," then yes, in a strictly metaphorical sense! But even if that's all true, there's one thing I know about Sarah Palin: she does not look like my 70-year-old Jewish second cousin wearing a beehive. Not even a little bit. I feel very strongly that I must speak the truth here; let the liberal media attack me if they will.

Anyway, while Sarah Palin was up north fucking a moose (TOTALLY METAPHORICALLY I MIGHT ADD PLEASE DO NOT SUE WONKETTE GOVERNOR PALIN THANK YOU), much filthier perversions were unfolding in the halls of the Senate. This stooped Senator Man ... uh, Harry Reid, maybe? Oh, who the hell knows; all we can tell is that he's stooped, his mouth is pulled back into a pained, death's-head rictus that I guess is supposed to be a smile, and he's totally gonna get it on in a gang-bang with all these lobbyist-dwarfs! Woo-hoo! Lobbyist-dwarf orgy! And this, by the way, is totally non-metaphorical; every single senator spends the bulk of his or her days gettin' freaky with tiny lobbyists. Then John Ensign's mom pays them to go away.

Not all of us have access to sexy lobbyist-dwarves, though, so we have to go with the next best thing: heading down the beach with a sexy donkey-lady! The donkey-lady represents the Democratic Party, obviously. This donkey-lady hasn't read the cap and trade bill that her man-friend has brought to the beach, for light reading. The donkey is a lady because that represents the fact that she didn't read the cap-and-trade bill, like her more serious boyfriend is doing. She wants to see it in movie form! Ha ha, the ladies, am I right? I'll bet she'd read a bill if it was about shopping! Whaddya gonna do!

After his elaborate funeral, Michael Jackson's soul ascended to heaven; there, God's adorable little cherubim cowered in fear, because they were afraid that the King of Pop would molest them. This is by far the greatest of all the Michael Jackson-themed political cartoons that were churned out over the last week or so. It's from Singapore! I know, you think "cartoon about angel rape from Asian country" and you think "Japan," but no, the Singaporeans are stepping up their game, with the cartoon horror. SINGAPORE 1, AMERICA -1,000,000,000.

Oh, hey, Sarah Palin! Remember her? Kind of good-lookin' gal? Likes to hunt? Lots of kids? Hung around with what's his name, ol' grumpy gus, a lot last summer before they had some kind of falling out? Likes to fuck moose, then break their hearts? Anyway, long story short, it turns out she's a terrible death zombie, in disguise. Don't let her touch you with her skeleton-hands! YOUR SOUL WILL SHRIVEL AND DIE.