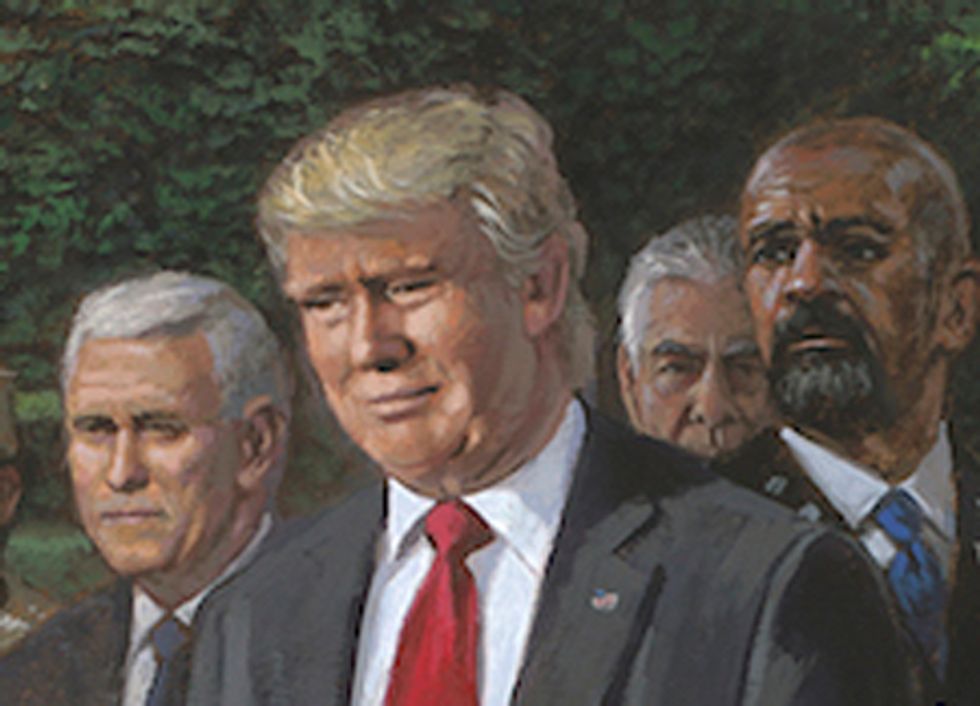 America's Greatest Artist, Salt Lake City Patriot and author of terrible YA Jesus stories Jon McNaughton, seemed to lose steam late in the Obama administration. Sure, he's been fitfully doing Patriotic Art Works in recent years, but they seldom live up to the masterstrokes of his "Jesus Gives George Washington the Constitution" and "Barack Obama Burns the Constitution" and "Why Didn’t Obama Notice He Had A Constitution Stuck To His Shoe When He Left The Restroom?"

McNaughton may be phoning it in, but he's still got a feel for the batshit insanity of his glory days. Consider this sequel to 2010's Barack Obama Stomps His Dirty Muslim Foot Disdainfully On The Constitution painting, otherwise known as "The Forgotten Man." In that painting, all the GOOD presidents (YAY!) are on one side of the painting, imploring Obama to pay attention to the plight of the ordinary American, a sad schlub on a park bench, while all the Bad Presidents (BOOOO!) are bunched up behind Obama. And Obama imperiously ignores the poor Real American, whom he hates:

McNaughton, still in his salad days, had a whole big interactive feature to go with that one, with thoughtful rollover commentary on almost all the recognizable figures, including "American Flag: The flag is hanging at half-mast to represent that our country is experiencing a tragedy of monumental proportions" and "Stormy Skies: An ominous dark cloud hangs over this country in the form of an uncontrollable Federal Deficit with crushing debt obligations. We are also in peril by the continued dismantling of our individual freedoms." The annotations include each president's name and term of office, the national debt (BOO!) during every president's term, and little editorial notes, like excoriating George H.W. Bush for going back on his promise to never raise taxes, the traitor.

The new work, "You Are Not Forgotten," doesn't have any interactive annotations, and with the exceptions of Mike Pence, Donald Trump, Rex Tillerson, and Insane Milwaukee County Sheriff David Clarke, the figures all appear to be generic stand-ins for Real Americans: Cops, Soldiers, a black lady Gold Star Mother, a saluting Marine, Veterans, Biker Veterans, a Wheelchair Veteran, an Amputee Veteran with a Veteran Service Dog, and all the other kinds of Veterans that make up the rich tapestry of American life. They are carefully reproduced from stock photos, or people Jon McNaughton knows, we guess. Also, NO MUSLIMS.

McNaughton has made a brand new video trailer for his painting, too, and it is him reading the text below the vid:

McNaughton does at least have some interpretive text on the Order Page (priced from $29 for a simple 10 X 15 inch print to $705.00 for a "30X45 inch Limited Edition Giclee" print, on canvas, signed and numbered):

When I decided to paint this picture, I wondered if this was taking it too far. But, sometimes you have to speak forcefully, like the brushstrokes of my painting.

Many Americans have felt forgotten by the establishment in Washington. I’m talking about the people who are more interested in themselves, and their political careers.

How many veterans have been neglected? How many of our police officers have been marginalized? How many families are suffering because of poor healthcare, limited opportunities, and government intrusion?

Last year we elected President Trump. He expressed by his words and demeanor what Americans wanted - a man who was not going to bow down to Washington or other countries. A man that would not forget the “forgotten men and women” of this country who elected him.

I want a president that will crush the enemies of liberty, justice, and American prosperity.

And there's Donald Trump, crushing a snake's head where Obama had been stomping on the Constitution. Obviously, the snake is many things: It is America's enemies, but it is also the devil, by which we mean Barack Obama, burner and treader-onner of the Constitution, don't you think? What really fascinates us here is how accurately McNaughton has captured Trump's expression of utter indifferent vacuity. Even in a painting that's supposed to be honoring the great rescuer of America, Trump is simply looking on and thinking "What the fuck? How did I even get here? And what happened to that money on the ground in the other picture? I want it! Mmmm, money."

Meanwhile, the Forgotten Man has gotten a Forgotten Wife and a Forgotten Child, and together they are growing a NEW Tree of Liberty. But Trump has forgotten to give them any blood of tyrants to water it, so unless he kicks that dead Obama-snake over to them, it will probably die. In a government shutdown over the Wall.

Or maybe the plant will sing show tunes like Audrey II.

In conclusion, Jon McNaughton is out of ideas, but he's not out of paint and canvass. God help us.

Also, also, it's your OPEN THREAD

Yr Wonkette is supported by reader donations! Please click "Donate" or we may make art of you.