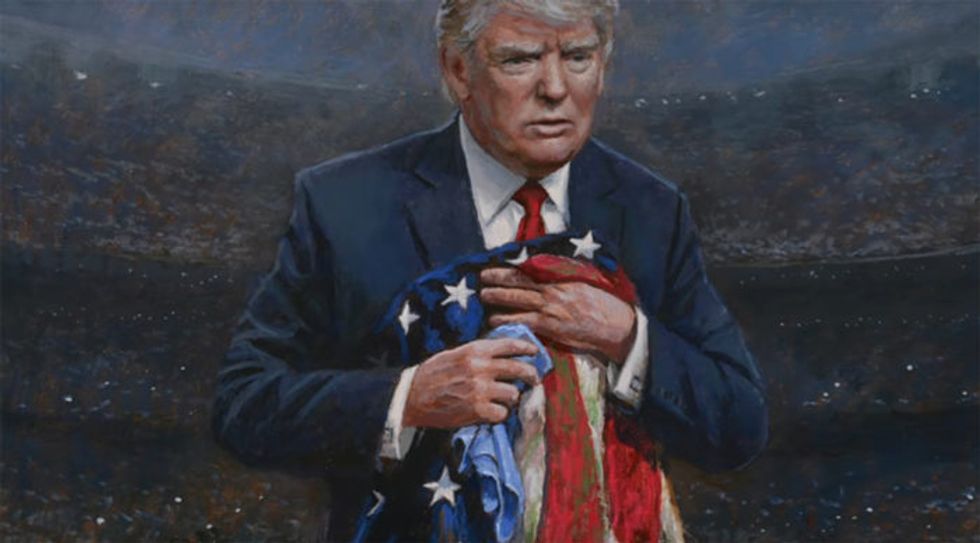 BASED ON A TRUE STORY

America's greatest hack artist, Jon McNaughton, brings us yet another patriotic masterpiece in the tradition of "Barack Obama Steps on the Constitution and Angers the Founding Fathers (and They Were FATHERS, You PC Idiot)" and "Donald Trump Rescues the Constitution and America and Also So Does Sheriff David Clarke Hooray." The new masterwork is called, simply, "Respect the Flag," and is available in atrocious versions to fit any budget, from a frameable lithograph on paper at $29.00 (none of your 99 cent trickery from this good Christian!) to a 20" by 24" signed and numbered giclee on real canvas with a burnished bronze frame for just $411.00.

Because Jon McNaughton is irrepressibly, irredeemably didactic, he made a video explaining what you are looking at, you lunkhead:

Did you know that the flag is more than a banner? It is a symbol of freedom, including the right to protest, but not the right to disrespect the flag! For those of you who cannot stomach the video, McNaughton explainers:

In my mind, I envisioned the president standing on a football field, after he's picked up a shredded, trampled, grass-stained American flag, and he holds it up to his chest and he attempts to clean it with a rag, and he says, "What are you doing?"

Apropos of nothing, and we don't know why we bring it up at all, but for some unknown reason, this:

ANYWAY! From the artist who first burst on the scene with his True Historical Reenactment of Jesus handing the Constitution to George Washington, this new work is actually far simpler than McNaughton's usual technique of piling a bunch of symbolic shit into a single painting (sometimes with interactive answer key on the website). Instead, "Respect the Flag" shares far more in style with his simple, subtle masterpiece "Barack Obama Literally Burns The Constitution Because That Is What He Actually Did You Know."

They could almost be a diptych, don't you think? A diptych by a dipshit.

Sean Hannity Buys Art Masterpiece For Donald Trump, Just As Classy As Anything Else Trump Owns

Maybe the Trump Foundation's portraits of Donald can be collected at the White House, too!

Sean Hannity, who actually bought Donald Trump his very own McNaughton print ("Obama Steps on the Constitution Etc.") the week after the election, tweeted out McNaughton's new video Monday with a challenge to "The Left": Love this provocative art or admit you are a big elitist hypocrite, you!

See what he did there? He just called out all the haters who say they like art, but they won't like this art because it DARES TO LOVE AMERICA, and leftists hate America!!!!!

The replies were swift, and often very thoughtful:

Hannity even inspired others to offer their own "outsider art" challenges to the snooty elites and would-be taste-makers who think they're better than you:

The “left” loves art, and especially taxpayer funded art that is “provocative”. Let’s get their reaction to this. pic.twitter.com/wclQL4cgT0

We would say a lot more about Sean Hannity and Good Art, but suddenly we are run over by a paint truck.

Yr Wonkette is supported by reader donations. Please click here to help us curate our collections. Isn't that what the kids are calling it these days?