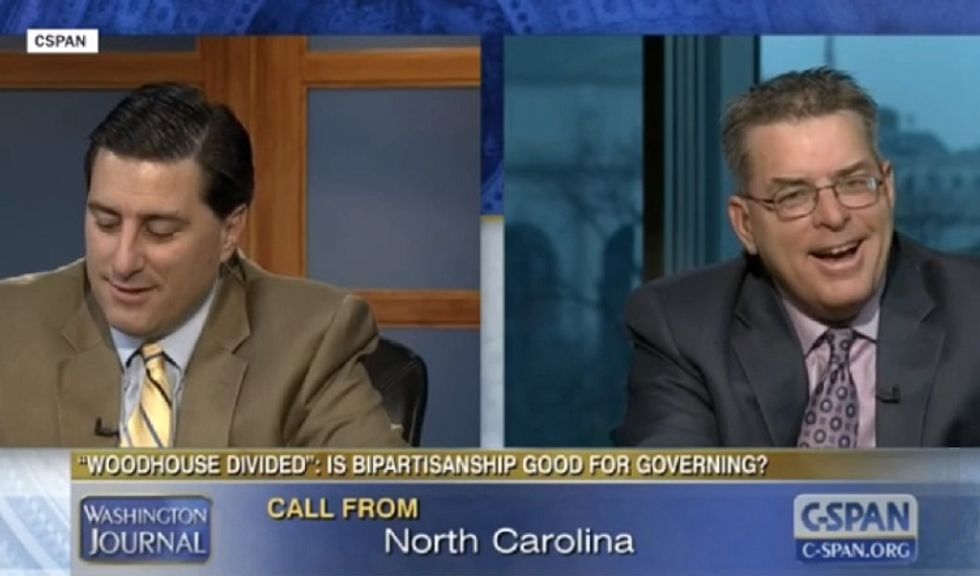 We'll confess that we don't spend a lot of time listening to C-SPAN's call-in segments, which means that we are definitely not getting regular doses of recycled shouting points from talk radio. It also means that we had to read the Interwebs to find out that C-SPAN was an especially good place for trolls to call in with questions about the size of Mitt Romney's penis. The few times we've listened in, the callers mostly sounded like they were auditioning for that AM-radio show where people talk all night about myths like Bigfoot, UFO abductions, and the extreme socialist wing of the Democratic Party. So we're sorry, we were not previously aware that C-SPAN regularly features a couple of brothers, Brad and Dallas Woodhouse, who argue about politics. Brad's the Democrat and president of the progressive PAC American Bridge; Dallas, fittingly enough, is the Republican, and is also the North Carolina director for Americans for Prosperity. They yell at each other a lot, is their schtick we guess.

And now Brad and Dallas Woodhouse get the bragging rights over the second-best troll call ever made to C-SPAN (sorry, the Romney Peen troll still holds the title), after their mother called in to their show without any advance warning.

You see, the boys had claimed that their political bickering is just one of those things that happens in families, and that their disagreements were pretty typical of how families get along. Not so, said Mother Woodhouse:

“I don’t know many families that are fighting at Thanksgiving,” she said. “I’m hoping you’ll have some of this out of your system when you come here for Christmas. I would really like a peaceful Christmas.”

Host Steve Scully interjected that the call was not planned, and that Joy Woodhouse had simply "called in on the normal line." Hahaha, don't joke us, C-SPAN -- we know that you have one line for Democrats, another for Republicans, but there is no way in hell you have a special line for normal people.

Dallas dutifully told his mother that he loves her, and she replied, "And I love politics," which is all we need to know in order to proclaim her a good mom. She also said, to Scully, that both her sons are "very passionate about what they believe in, and I love that about them; but I hope they just kinda get this out of their system today on your program."

It was pretty fun, but the Arguing Politics Brothers are going to have to step up their game if they ever hope to match the occasional calls from Elizabeth Magliozzi to Car Talk, where Tom and Ray regularly asked her what she was doing out of jail.