An Interview With Grant Ginder, Writer Of Washington Fictions 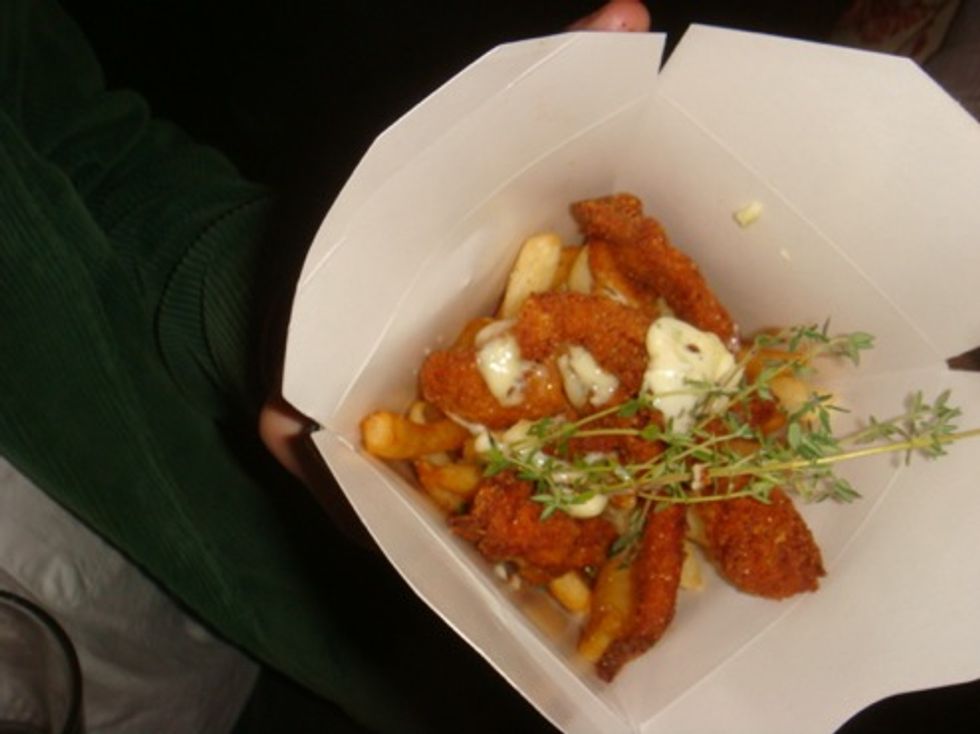 Your Wonkette recently had the pleasure of interviewing Center for American Progress speechwriter and "nouveau literature author" Grant Ginder, who's just had his first novel, This Is How It Starts, published by Simon and Schuster. It's in book stores everywhere! But what is it about? The novel follows young Taylor Mark, who moves to Washington D.C. shortly after college and discovers how terrible it is, maybe. Then he runs around and whines like a bitch for a while and even goes to one very important Late Night Shots party. But it's funny! Roll Call is raving! After the jump, the text our our very embarrassing Gchat conversation with Grant about Mike Allen and the Politico, as well as pictures from last week's book release party in a Georgetown bar that is literally owned by Ralph Lauren Polo.

(Fairly massive full disclosure: ha ha, your associate editor "Jim" knows Grant from college, where they worked together on the school's weekly magazine, writing things that, at the time, seemed funny. File your ethics complaint to Ken Layne.)

W: We have finished your book, "This Is How It Starts," and it is the best book besides Snark or The Bible, ever. When did you write it?

Grant: I sort of agree with you that it's better than the middle of the new testament, but not better than genesis or Snark. I started writing it in the summer of '07.

W: When you went home from your job every day, why did you spend your time writing a book about morals instead of watching teevee or playing World of Warcraft, like most people?

Grant: no no, you have this wrong. i wrote it AT work. (kidding)

Grant: I actually wrote most of it during the weekends -- teevee still takes a higher priority over writing. And I'm really bad at games, with the exception of Catchphrase, but that's only because I've memorized all the words. So, Warcraft was sort of out of the question.

That's Grant on the right, hugging a special friend!

W: Okay so you wrote this book about how terrible Washington D.C. is, while playing Warcraft, on the weekends. How did you trick a major corporation into publishing it? It is very hard to publish books!

Grant: I actually still have no idea. And in all fairness, it was my agent who tricked the major corporation into publishing it. The real trick was conning my agent into thinking the book might actually sell.

W: Are you still working for CAP, even though you're a rich author of fictions?

Grant: Yes, I'm still working for CAP. You don't get rich being an author of fictions.

NOW WHO'S THAT? From the left: nutty Intern Riley Waggaman, responsible adult Intern Arielle Fleisher, and Amanda Terkel from Think Progress (you know, the one who got chased on vacation by Bill O'Reilly).

W: Your character is a 23 or 24-year-old Penn grad from Laguna Beach who is basically not a total dick. He hates Washington D.C., as he should. Was that where you were coming from, though? Do you hate Washington like Taylor Mark does? Or did you, before you moved to be a fat cat New Yorker?

Grant: Haha. I think Taylor's sort of a dick -- so we differ on that front. No, I don't hate Washington like Taylor Mark does. I mean, I hate PARTS of it. But I moved to New York so I could order cheese fries and milkshakes to be delivered to my apartment at 3am -- not because I necessarily loathed DC.

While Grant served plenty of delicious food at his book party, the best was easily this Asian fusion thing, the "Fapper's Delight."

W: But it seems like if some young CAP employee spends all his weekends writing books about how his on-paper clone hates the dickens out of a town culture, then YOU WOULD PROBABLY FEEL THAT WAY TOO. How are you different? Why do you lie? You still go to LNS parties every night, don't you. You come down by plane. And go to LNS. Why should we believe anything you say?

Grant: Jesus -- FINE. Yes. I do. Is that what you wanted to hear? I come down by plane and cry about the loss of my own morality like Anderson Cooper watching a replay of Katrina coverage.

W: You just spoiled the plot!

W: Taylor is, admittedly, an insane baby by about page 150.

Grant: Yeah, I sort of find him insufferable. but, people who are uber self-aware - basically our entire generation - are usually insufferable. so, hopefully it works.

Grant autographs his book. Off to the pawn shop!

W: But then you have the other characters, the Hill staffers, the lobbyists, the LNSers, etc., who are completely lacking all self-awareness, making them terrible too. Or do we perhaps have AN UNRELIABLE NARRATOR?

Grant: You hit the nail on the head there, Jimbo. Taylor Mark is pretty much our generation's Hamlet.

W: Okay well how about this. I could imagine reading, in an important New York literary newspaper or magazine, a review of your book in which some (MEAN) critic calls some of your characters somewhat... one-dimensional and cliche? LET ME FINISH. But as a Washington person, I was reading some of these characters -- the trophy wives, the preppy racists, the selfish columnists -- and thinking, they really are exactly like this though.

Grant: It was kind of a battle writing a handful of the characters, because i was pretty keenly aware that some of them were coming off as one-dimensional (but really, they're like that!) or, fine, they're not all like that. so, in many cases i tried to make the characters caricatures of themselves, to push them beyond the point of cliche into the realm that sort of gives you a stomach ache. there's also the argument that cliches exist for a reason; because, in fact, that's just how some things are.

Grant: JESUS WHAT IS IT WITH YOU AND PUNCTUATION STOP THINKING YOU'RE A JOURNALIST

It's not every day you meet a famous author in the flesh, so we had Grant sign some other great books for us, too.

Grant: Haha. Actually, I think the gay gossip columnist is a good one to bring up, going back to your question about all those "cliches." Someone - one of those nasty literary critics - cited The Gay as just another cliche in the book. really, though, it was a very conscious choice to make him gay. i wanted to show a situation in which someone was charged with reporting on someone else's business, while being forced - by culture, society, whatever - to keep is own business pretty much under wraps.

W: Yeah, I mean, the actual DC gossip person who now works for Politico is Patrick Gavin, and he can't be gay -- he just got engaged to a woman! (?)

W: Yes, that could be your non-cliche response to the New York critic, that you should've made the gossip columnist a polygamist.

W: Okay let's wrap this up. LIGHTNING ROUND.

W: How many LNS parties did you go to?

Grant: A few? I was too blasted and pumping my fist to Journey and White Snake and like nine other 80s hair bands to actually remember.

W: Yeah, actually, enough with the lightning round, let's end with THIS. You pretend that it only comes up once, for a couple of paragraphs, which is true -- is only mentioned by NAME once. But the night of the LNS party at Smith Point is the freaking CLIMAX OF YOUR BOOK.

Grant: Wait, no, it's not. It's been a while since I read the thing (too many cliches to get through) -- but, I think the only thing that climaxes at that party is Chase, when he's getting head in the broom closet.

W: Yeah, and Taylor pretends to be upset, but since he is unreliable we can safely assume he was beating off from the other side of the broom closet.

W: The end. Say something nice to the Wonkette readers, whose opinion counts!

Grant: No way. Those fucking hipsters are ruining America with their Musics and their Arts.