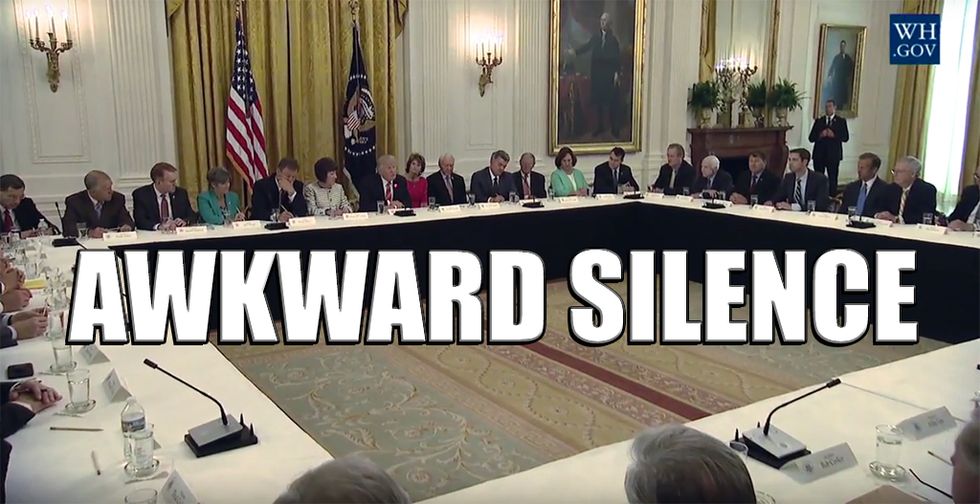 Lindsey Graham and Chuck Grassley want to see the FBI's Trump-Russia search warrants after reading about how Carter Page was being investigated for potentially being a damn spy.

Trump's legal team seems to have slipped a leash and muzzle on Trump tweeting hand, at least in response to firing off insults at James Comey and special counsel Robert Mueller. (Not so much for insults at Mika and Morning Joe.)

Obama had reasons not to start a panic about Trump-Russia during the election because he's not A Idiot. So there!

Smoke-filled rooms are full of Republicans seething about healthcare, despite their forced laughter and canned applause lines, because moderates don't feel like killing their base of old folks who need Medicare.

Anthem is hitting the gas on bailing out of ObamaCare in Nevada and will now sell insurance in only three counties state-wide. There's no joke, this is getting beyond serious.

People are starting to whisper "bipartisanship" through the cacophonous halls of Congress in order to offer up a healthcare bill that isn't a moldy shit sandwich.

After the National Republican Senate Committee abandoned an $800,000 ad campaign to support Ron Johnson, leaving Johnson "mega-pissed about what McConnell and Leadership did to him during the Senate race," Johnson had little incentive to support TrumpCare.

Senate Republicans are quietly biting their nails about more than just healthcare as their ultra conservative legislative agenda for fucking over poor people is now in jeopardy as skeletons with knives in their backs begin to spill out of closets.

Blue Dog Democrats were ALLEGEDLY willing to work with Trump, but then he started tweeting, so they decided to say, "Fuck you too, buddy."

REXXON woke up and started screaming at White House aides for repeatedly tying his hands and screwing him for simply trying to staff his offices with competent people.

Trump is bitching about Nancy Pelosi and CNN behind closed doors in order to raise money for Republicans and Reince Priebus to put out the fires he keeps starting.

Government officials around the world are SUPER pissed at the NSA for allowing cyber weapons to fall into the hands of nefarious assholes and trolls who stalk the Internet, committing digital muggings and stealing data.

An FBI agent has been indicted for LYING in a case involving the death of Bundy-buddy Robert "LaVoy" Finicum. You may remember Finicum followed Cliven Bundy and several "sovereign citizens"/patriots/'Mericans/jackasses in taking over a federal building in Oregon for several months and threatened anyone who tried to stop them.

A new study out of Georgetown University Law Center on Poverty and Inequality finds that black girls between the ages five and 14 are seen as more adult than white girls, and are considered guilty of something (ANYTHING) because everything is terrible.

The lawyer for Prince Jared and Princess Ivanka, Jamie Gorelick, is still fighting Trump's sanctuary cities policies, which is great, albeit weird.

Republican gubernatorial candidates in Illinois, Maryland and Virginia are in a bit of a bind as they try to run their campaigns with that deer-in-the-headlights look in their eyes.

The Republican Party in Maine is splitting apart thanks to Governor Paul LePage, who is threatening to shut down the state government over budget cuts and Susan Collins's lack of support for TrumpCare. Why do arch-conservatives always think shutting down the government is a viable political option?

Perjury charges for the arresting officer in the Sandra Bland case have been dropped after the officer agreed to "You're Fired" himself from his career in law enforcement forever.

The Petya hack that has infected corporate computer systems around the world is getting even weirder after the code's author resurfaced to deny his involvement, a move that has some good guy hackers calling "bullshit."

Syrian President Bashar al Assad says that he he's not about to attack civilians with chemical weapons (again) and that Trump's White House is a bunch of lying liars blithering fake news.

The Pentagon's plan for Syria was apparently pulled off a shelf of Obama-era policies, so naturally they just scratched off the old names and just wrote their own.

The Russian and British navys are in the middle of a pissing contest over aircraft carriers, with the British mocking Russia's "dilapidated," smoke-spewing, Soviet-era Admiral Kuznetsov carrier.

Leader of the free world Angela Merkel gave a speech saying that "Whoever believes that the world's problems can be solved by isolationism and protectionism is mistaken," in an obvious slam at Trump ahead of the G20 summit.

GOOD NEWS, EVERYONE! The British government doesn't want to let Rupert Murdoch buy Sky, with culture secretary Karen Bradley stating that Murdoch would have way too much capability to brainwash,indoctrinate, influence British subjects, and the deal is probably going to be sent to the Competition and Markets Authority for investigation. Indeed!

THERE'S A NEW WRESTLER BOUNCING OFF THE TURNBUCKLES, LADIES AND DUDE-BROS! See the amazing "Progressive Liberal," Dan Richards, the most hated man in Appalachian Mountain Wrestling! Watch out for his devastating Liberal Agenda!

And here's your late night wrap-up! Sam Bee'splainered McConnellCare, and had some talky time with Elizabeth Warren; Colbert asked a baker why he's butthurt over weddings with buttsex.

And here's your morning Nice Time! Baby goats and puppies!

We love you a lot, but we need your Ameros. Ain't nobody got dimes for free love here!