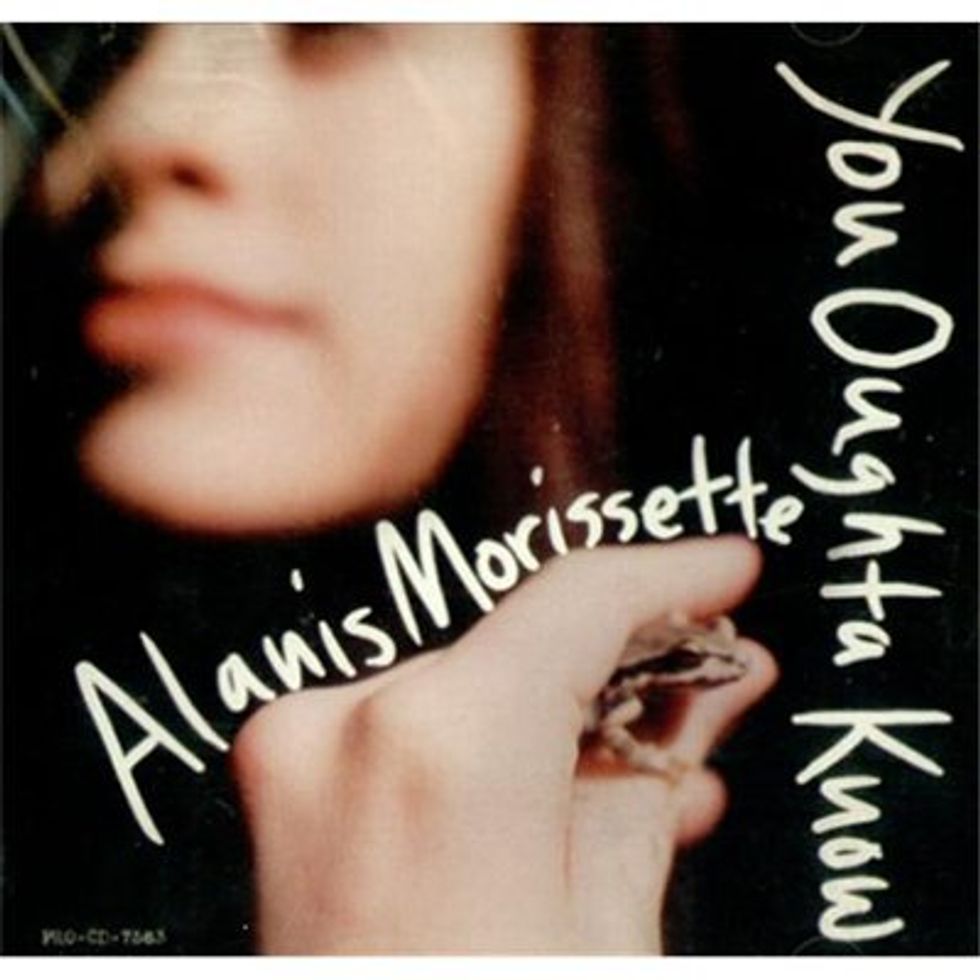 Okay, we are going to say DISCLAIMER ALERT and TRIGGER WARNING, because we are about to write about how a thing written by a person who has ALWAYS been personally very nice to us is Wrong About A Thing.* We trust that she and we are both grown-up enough to have an intellectual discussion without it degenerating into FISTICUFFS. So, without further ado:

You wrote the other day about how Taylor Swift, PBUH, was doing a concert in Los Angeles and, as she's been doing every show of this tour, she brought out one of her funtime pals to sing a song with her. This time it was Alanis Morissette! Now most of the Olds who brought their kids to the show were probably sexcited to see her, but some of the Kids These Days did that thing where they reveal how they don't know anything about anything that happened before the introduction of Snapchat, because they are dumb:

Yeah good question, Bella! Who IS even Alanis come on Taylor???

At a recent concert, Taylor Swift pulled Alanis Morissette onstage with her, and they sang “You Oughta Know,” Morissette's 1995 anthem about being that embarrassing person who makes drunken, angry calls to your ex who then inevitably tells his or her partner that it was just a telemarketer. [...]

Long before the terms “nice guy syndrome” and “friend zone” were created to describe men who think they are entitled to have a relationship with someone just because they do nice things for them, Morissette tore up the charts with a song about a woman who thinks the same way. “Would she go down on you in a theater?” the narrator of “You Oughta Know” plaintively asks about the woman her ex chose instead. “And would she have your baby?” Begging and clumsy emotional blackmail isn't a good look on anyone, male or female.

Bella, this is incorrect.

In the pre-9/11 days, before you and your fellow Taylor Swift fans were even a maybe-abortion in your mothers' minds, there was a thing called "the 1990s." And in the early part of that decade, there were still these big record companies, and you had to buy CDs at the store, and artists' success very much hinged on whether they could get played on the radio. And Alanis Morissette was one of the first women to really start to break that barrier down, along with other women like Tori Amos, Björk, Polly Jean Harvey, Liz Phair and bands like Hole, The Breeders, The Cranberries and many others. They were ALL LADIES, and all of a sudden, they were ALL OVER the radio, and not in some pop music kind of Madonna or Paula Abdul kind of way. (We are not Saying A Mean about those women, we like them too, but that's not our subject matter today, so please refrain from yelling "DIVA!" about Madonna while we are 'splaining, GAY MAN READERS.)

As for the song, which was and is a HUGE hit, "You Oughta Know" is not really about being "that embarrassing person who makes drunken, angry calls," nor is it about feeling like you are "entitled" to a relationship, and it's really not about "clumsy emotional blackmail" either. It's about that thing when you get dumped by somebody you REALLY love (or think you love), and you're going through all the emotions, even the nasty ones, the vindictive ones, where you're like "But if I burned their house down, then they couldn't bother me anymore!" (Not that we would know that feeling, NOPE!) It's a song about being completely emotionally raw and angry. And that, we'd argue, is part of why the song propelled Morissette from general nothing-hood into winning ALL THE GRAMMYS the next year.

Amanda seems to have a problem with the feminist nature of the message, or more specifically, the LACK of feminism she perceives in the lyrics:

But weirdly enough, “You Oughta Know” was held up in 1995 as some kind of feminist anthem of empowerment, an angry yalp of rebellion from ladies who had enough. And certainly, Morissette throws her back into it, growling and singing with all her might. But it's still a song about refusing to take no for an answer. This is a “yes means yes” world. There's no reason for the teens of this world to know anything about Alanis Morissette.

Amanda! Not every song sung by a lady has to sound like an Audre Lorde book with a backbeat! Maybe the song was perceived as a feminist anthem because it was so rare to hear a woman loudly singing about emotions that up to then didn't have much of a place in mainstream musical culture, at least not coming from women. Maybe many women STILL perceive it that way. And men too! Hell, we are Teh Gay, and we have DEFINITELY had occasion in our gay life to drive down the road with that shit blaring, yelling at the moon about what a fucking douchebag that guy is, and really, you're dating HIM now? OH OKAY! He's ugly, we hope you know that KTHXBYE.

It's not about "refusing to take no for an answer." There is no "rape culture" moment going on here. It's about denial and anger, two of the very often overlapping stages of grief.

The takeaway here is that it's not a female artist's responsibility (or any artist's responsibility) to filter her music through some sort of feminist lens to make sure she's not breaking any rules. It's her responsibility to stay true to her art, and if that's where her muse was taking her that day, into full-on raging MAD denial about how this dude dropped her like a rock? Then fuck it. Write the song.

Anyway, we are not arguing that Taylor's child fans need to like Alanis Morissette. We are not that big of a musical snob and also don't care. But that is "who is even Alanis come on Taylor." Now you know.

Your Wonkette, who is always right, even when we are wrong, which does not happen.

*For an example of Amanda Marcotte being Right About A Thing, read her column on Chrissie Hynde's awful comments about rape.