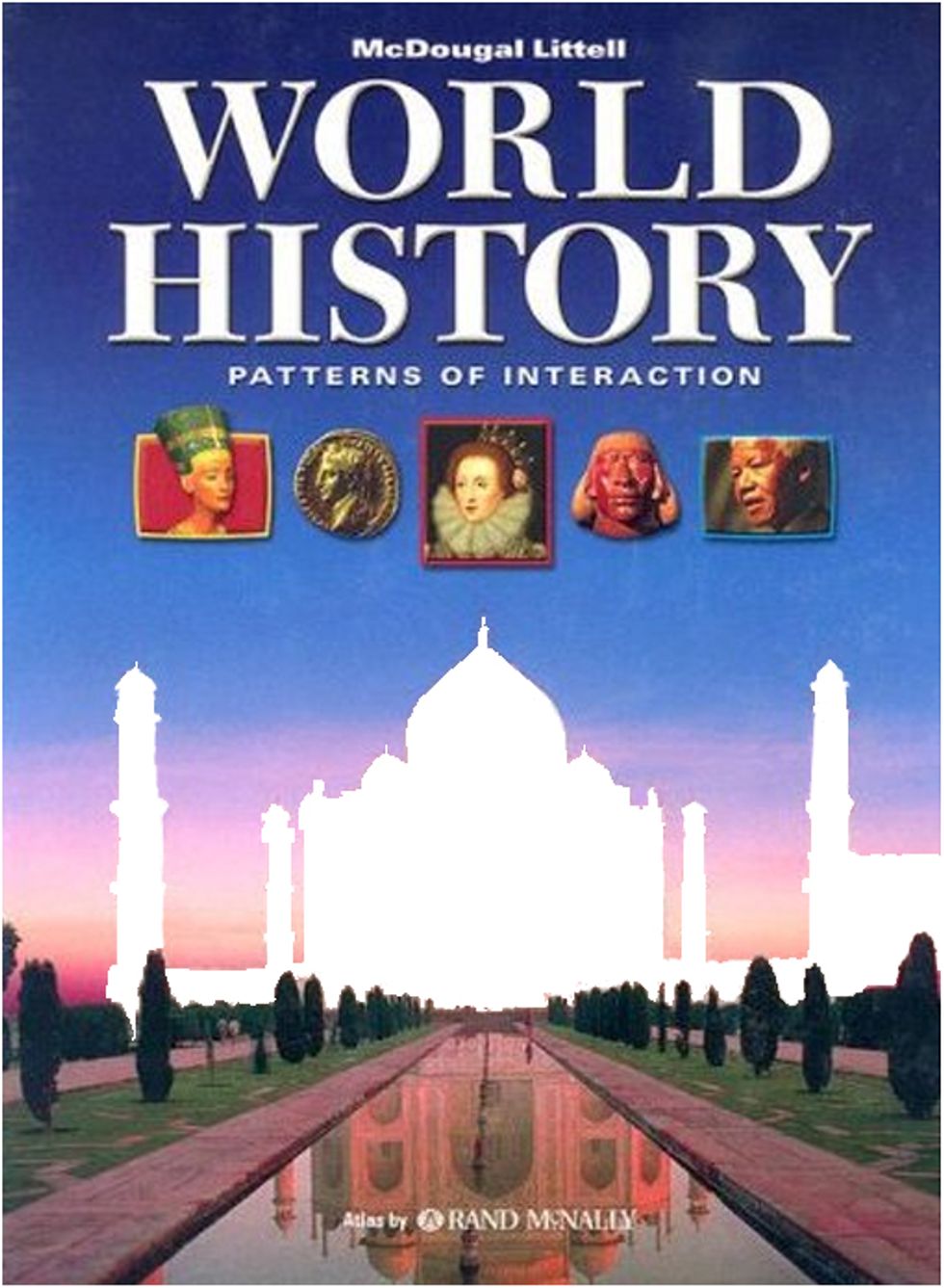 There. Much better without that nonsense

Welp, another Tennessee parent is angry about a textbook that acknowledges the existence of Islam, claiming that her seventh-grade daughter's Christian faith was imperiled by learning about such horrifying things as the name of the Muslim holy book, the location of the Arabian Peninsula, and the very existence of some guy named Muhammed. Michelle Edmisten of Blountville wants the Sullivan County Board of Education to immediately stop using a textbook that forced foreign religious concepts into her delicate snowflake of a daughter's head:

"It is time as parents, teachers, and administrators, we stand up and take back our families, our schools, and our country," she told the school board.

She added her daughter felt some assignments about Islamic beliefs violated her Christian beliefs, so the student refused to do some of the school work and failed those assignments.

“Those are zeroes that we proudly took and we will not compromise,” Edmisten said.

Some of the assignment questions were: "Islam's holy book is called the _________," "List the five pillars of Islam," and, "After the death of Muhammed, did the Muslim empire spread or get smaller?"

Though the questions seem innocent enough, Michelle Edmisten is adamant that her daughter's "personal religious beliefs were violated."

She is, therefore, adamant in her demand to get the book removed.

If this sounds familiar, it's because this is just the latest manifestation of a years-long freakout over supposed "Islamic indoctrination" in Tennessee's social studies curriculum, which mandates a horrifying two weeks of the seventh grade be spent on medieval Islamic history. We suppose Ms. Edmisten is an improvement over last year's poster child for Islamic Panic, homeschooler Patty Kinkead, who demanded the local schools stop it with all the Muslim Indoctrination, even though her own kids didn't attend the schools at all.

Tennessee Rep. Will Banish Islam From History. You Know, For The Kids

As we mentioned in our piece on Ms. Kinkead and also when a state legislator promised -- on 9/11, of course -- to eliminate Islam from the history standards last year, the curriculum isn't indoctrinating kids in anything, unless you redefine "indoctrination" to mean "learn some facts about." All major world religions are a part of the state's history standards, with the early history of Judaism and Christianity covered in sixth grade, and Islam being covered in seventh grade, right after the fall of the Roman Empire and just before the history of Africa from 400 AD to the 1500s. A bit later on, kids are also indoctrinated with information about Medieval Europe, the Renaissance, and the Reformation, although no Catholic parents appear to have complained their child will be corrupted by hearing the name Martin Luther.

Still, some raving loony anti-Islamic websites are claiming Perfect Victory over all that Islamic Indoctrination, since the state Board of Education has "capitulated" with some changes to the 7th-grade curriculum. Despite some sensational headlines saying the teaching of Islamic history has been removed altogether in response to the freakouts, the Board of Education has actually attempted to calm down some of the panicky parents through the magic of new headings: in what they're calling a "streamlining" of the curriculum, the number of specific standards has been reduced, and the section formerly headed "Islamic World, 400 A.D/C.E.–1500s" has been folded into a new section called "Southwest Asia and North Africa: 400-1500s C.E." The new standards will go into effect for the 2019 school year. That nasty word "Islam" has been elided from the subject listing, so maybe teachers can go about the business of teaching and the self-righteous Islamophobes can claim victory and go home. Sadly, it seems unlikely the revision will satisfy everyone, since eventually the paranoids will notice the schools haven't actually whited out large sections of the Middle East on maps.

As for the fight over the textbook in Blountville, Michelle Edmisten has found herself an ally on the Sullivan County School Board; at a board meeting Monday, board member Mark Ireson called for the text's immediate removal "because it does not represent the values of the county.” Officials of the school district objected, pointing out that the district already has a procedure in place to challenge curricular materials, which would require a parent filing a formal request, followed by the formation of a committee to address the challenge. Ms. Edminsten is not at all satisfied with the new state history standards, testifying at the board meeting, "I'm going to continue the fight. 2019 is too long to wait."

(As to the "values of the county," perhaps the schoolboard member was right; Tennessee counties have been showing their "values" to local Muslims for some time now.)

Ms. Edmisten added that nothing less than the immediate removal of the textbook will be satisfactory, because apparently its very existence threatens her rights as an American to dictate to all other families what their children learn in the 7th grade:

“How can I, as a Christian, say that I have these values? And I want to instill these values in my daughter, but then say it’s OK, go ahead and do it,” she wonders.

Here's a wild idea, Ms. Edmisten: If your faith is any good, it's likely to be able to withstand your daughter's learning that other faiths exist. It's almost as if you don't have that much faith in it.