Oppressed Wall Streeters Do Not Care For These Mean Protesters 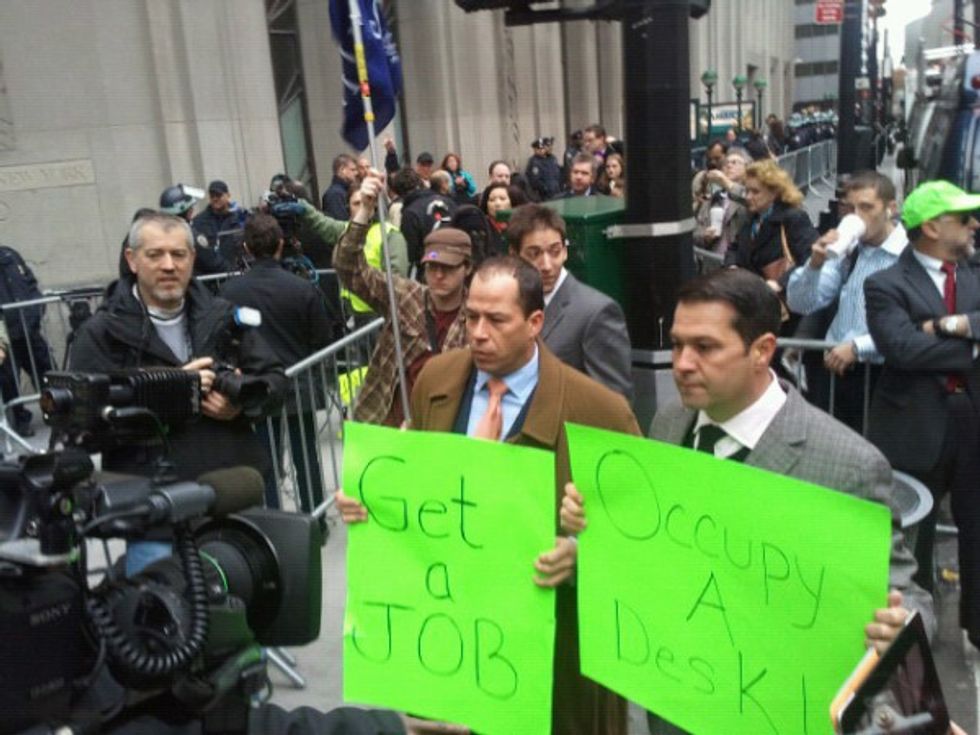 Here is video from Salon's Justin Elliot of protesters having a merry little tussle this morning near the New York Stock Exchange, where cops have arrested as many as 75 protesters so far, for the crime of making it slightly more difficult for Wall Street employees to get to work, the most illegal thing in America right now.

Protesters converged on the Financial District in hopes of disrupting or delaying the opening bell of the stock market without luck in that particular endeavor, but the barricades and swarms of 99 percenters made "corrupt business as usual" a little tougher. And boy those employees think social justice is lame, when it is inconvenient (which is always)! The excellent OWS liveblog from the Guardian has some fun quotes from the crabby Wall Streeters:

Only employees with company ID are being allowed through. Workers, already blocked from leaving the subway at their usual exits are tutting and exhaling at police officers directing them away from streets closed because of the march.

There was little sympathy for the occupy movement here. "I've been trying to get to work for half an hour, they should throw them all in jail," one woman said as she approached Exchange Place, where protesters had gathered and were sitting in a circle telling stories of economic hardship.

A man in a suit waiting to be allowed through a police barricade told his friend: "Don't worry they'll all get arrested in a minute." Groups of protesters gathered in the streets parallel to Wall street, singing and chanting behind barriers.

Of course, not all of the financial types were in a massive hurry to get to work. A couple of them still had time to pull out their angry signs for some teevee cameras, to make an important point:

Yes, go get one of those jobs, that don't exist! (Although, it bears repeating that 70% of OWS protesters have employment, compared to 56% of Tea Party idjits.) But anyway, forget these sad-faced slobs. Protesters are regrouping at Zuccotti Park despite the barricades, hooray! [NYT/Guardian/Salon]