Ann Coulter Continues Her 'Not Sure If Trolling?' Summer Tour 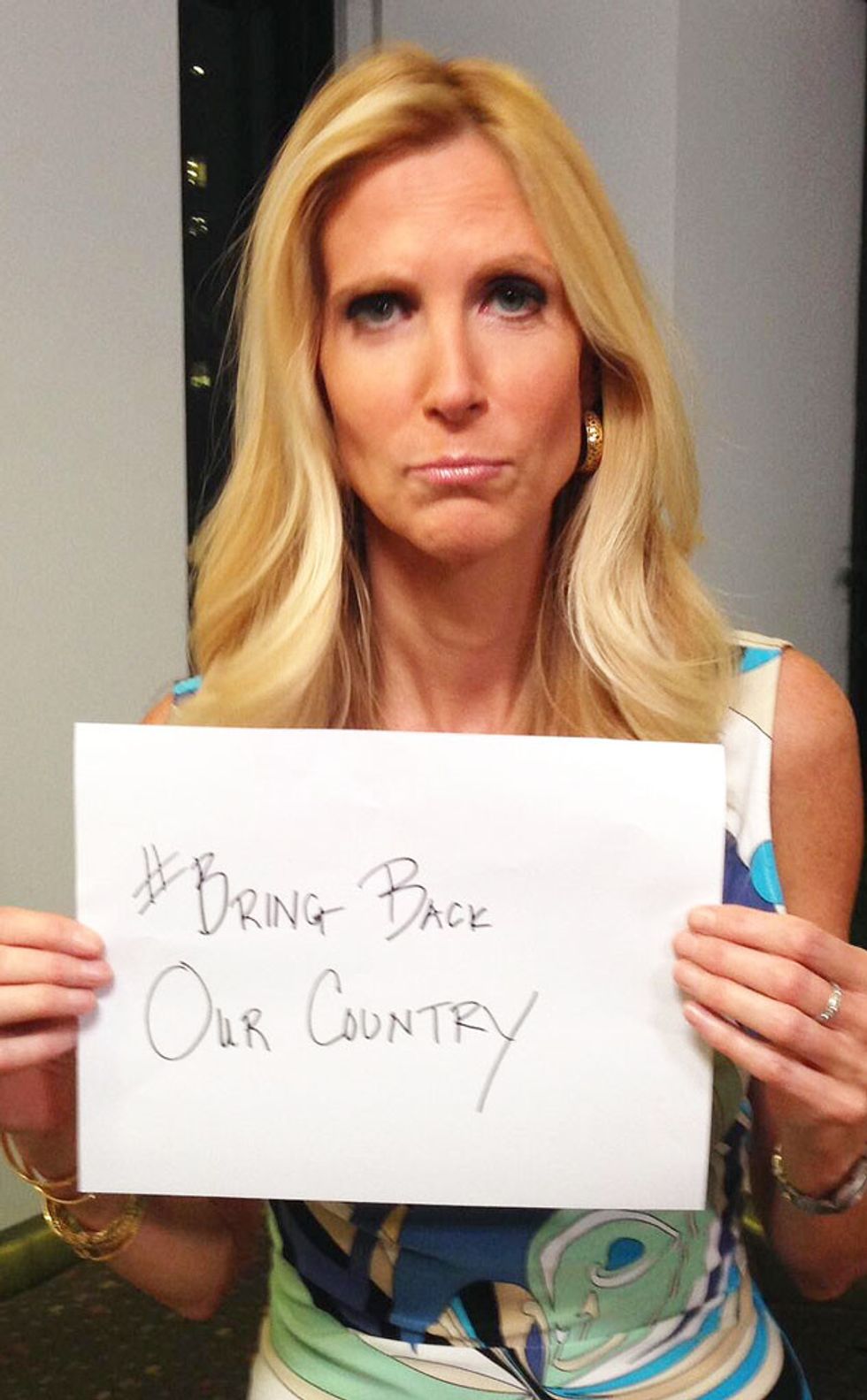 Ann Coulter continues her summer-long metamorphosis from screeching, #SlatePitching hate troll to design-school drop-out performance artist. It all started back in June, when she suggested with a straight face that enjoying soccer was a sign of "national decay." Yesterday, it continued with her latest column about Dr. Kent Brantly, the American physician she accuses of "Christian narcissism" for the mortal sin of trying to help Africans afflicted with hemorrhagic fever. You try to make sense out of the opening of Coulter's column, because we can't.

I wonder how the Ebola doctor feels now that his humanitarian trip has cost a Christian charity much more than any services he rendered.

What was the point?

Whatever good Dr. Kent Brantly did in Liberia has now been overwhelmed by the more than $2 million already paid by the Christian charities Samaritan's Purse and SIM USA just to fly him and his nurse home in separate Gulfstream jets, specially equipped with medical tents, and to care for them at one of America's premier hospitals. (This trip may be the first real-world demonstration of the economics of Obamacare.)

What the actual fuck does that last line even mean? A doctor goes to Africa to help stem the tide of a virus that makes you wonder what kind of compassionate God could create ebola in the first place, and that's "the first real-world demonstration" of a health care policy that was originally dreamed up by the Heritage Foundation? We could have sworn Romneycare was the first real-world demonstration of Obamacare. This is the kind of dissembling, digressing rant we expect from the schizophrenic man who sleeps at the bus stop near our house, or from one of our Tea Party uncles, not from Conservative Thought Leader Ann Coulter.

But while Coulter starts off making the sort of cold-blooded cost-benefit analysis that so endeared the Cheney family to the American right, she changes tack almost immediately. Maybe because it's crass to place a value on the lives of humans dying of ebola, and then compare that value with the cost of jet fuel? You might think so, but you would be wrong: Ann Coulter's real question is why couldn't this "Doctor" Kent Brantly have just stayed right here, in U.S.A. America? Physician, heal thyself, sayeth the Coulter.

No -- because we're doing just fine. America, the most powerful, influential nation on Earth, is merely in a pitched battle for its soul.

About 15,000 people are murdered in the U.S. every year. More than 38,000 die of drug overdoses, half of them from prescription drugs. More than 40 percent of babies are born out of wedlock. Despite the runaway success of "midnight basketball," a healthy chunk of those children go on to murder other children, rape grandmothers, bury little girls alive -- and then eat a sandwich. A power-mad president has thrown approximately 10 percent of all Americans off their health insurance -- the rest of you to come! All our elite cultural institutions laugh at virginity and celebrate promiscuity.

So no, there's nothing for a Christian to do here.

It's remarkable: Ann declares that there is a pitched battle for America's Christian soul, and then, just 99 words later, declares that the battle is over, all is forsaken, all is lost. So, Ann, in your estimation, what should Dr. Brantly have done instead of traveling to Africa to help people who will never buy one of your terrible books?

If Dr. Brantly had practiced at Cedars-Sinai hospital in Los Angeles and turned one single Hollywood power-broker to Christ, he would have done more good for the entire world than anything he could accomplish in a century spent in Liberia. Ebola kills only the body; the virus of spiritual bankruptcy and moral decadence spread by so many Hollywood movies infects the world.

And as long as it's just the body of some blah in Africa, who really cares, right? At this point, you can almost feel the flop sweat pouring off Coulter's fingers. She knows this column's crap, she knows she's not going to get away with this. So, like a starting pitcher who's been left in the game one inning too long, Coulter reaches back and puts everything she's got into one last fastball.

UPDATE! Somehow we glossed right over Ann Coulter recommending doctors go work at (Jewish) Cedars-Sinai with the intent of proselytizing at its (often-Jewish) patients and bringing them to Christ. Ben Shapiro, it's the Dems making war on Jews, right? Okay, let's continue.

America is the most consequential nation on Earth, and in desperate need of God at the moment. If America falls, it will be a thousand years of darkness for the entire planet.

A THOUSAND YEARS OF DARKNESS WILL BEFALL THE LORD'S PEOPLE IF WE DO NOT HEED COULTER'S WORDS. With the death toll from ebola approaching 1,000 people in west Africa, Coulter declares with a straight face that it is America that is truly in need of the Lord's attention. And she then attempts to conclude with a look at what a real Christian doctor would have done.

But serving the needy in some deadbeat town in Texas wouldn't have been "heroic." We wouldn't hear all the superlatives about Dr. Brantly's "unusual drive to help the less fortunate" or his membership in the "Gold Humanism Honor Society." Leaving his family behind in Texas to help the poor 6,000 miles away -- that's the ticket.

Ann, honey, come here. Rest your weary, angular skull on our bemuscled, manly shoulder. We shall now stroke your head to comfort you, because something is really, really not right with you, dear.