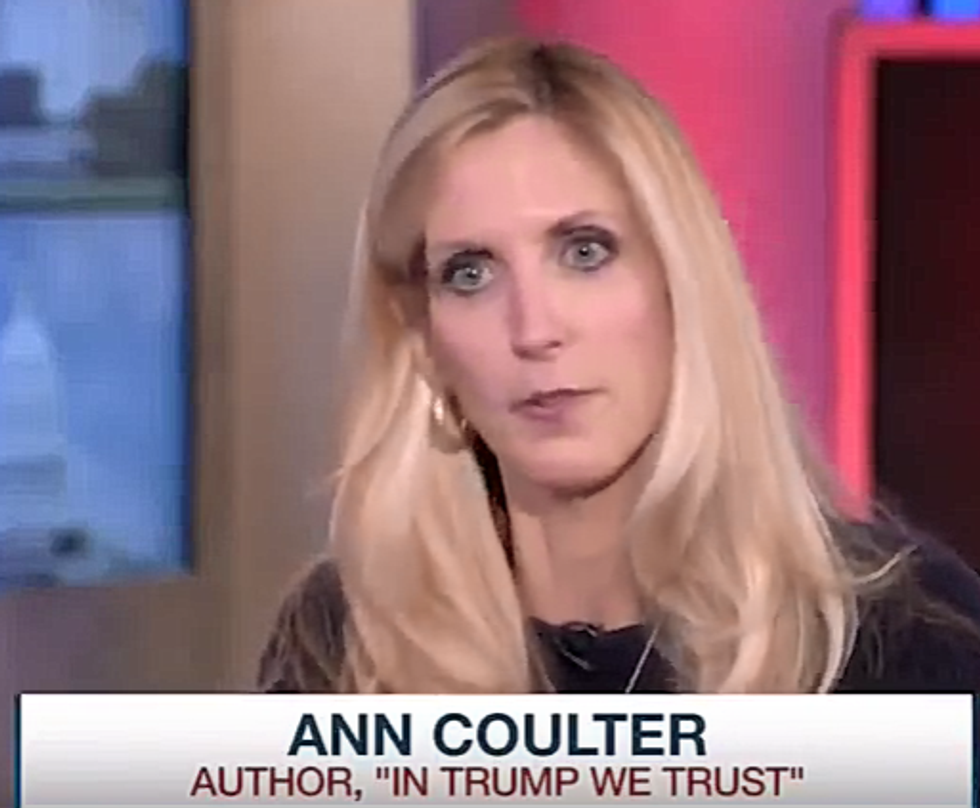 The face Ann makes just before she cries.

Let's check in with the Emo-Pants McRacist known as Ann Coulter and see how she's holding up lately. Throughout the past year, she's been enjoying a faint uptick in people noticing she's still among the living, mostly because Donald Trump is running for president and he and Ann hate all the same people. She's been weeping and gnashing her teeth over how Trump is getting LITERALLY RAPED by the media, because they quote him verbatim and stuff. She's been crying into last night's cocaine straw (allegedly), threatening to shut up and go away forever if Donald Trump loses. And then you'll be sorry she is gone because you will miss her VERY MUCH, and you'll totally regret being mean to her and to her puke-haired candidate. You'll see!

And now, with the sadness of somebody who knows her latest 15 minutes of fame are about to be discarded in the hamper like last night's little black cocktail dress, she is threatening to quit promoting her own new book if Donald Trump stops being mean to Mexicans. If he "softens his stance" and acts like a common Obama with immigrants, like he sorta kinda said he would to Bill O'Reilly, where does that leave old busted Ann Coulter? If Trump isn't threatening to send Mexicans flying through outer space with nothing for sustenance but leftover Trump Tower Taco Bowls, what is her life worth? What is her latest shitty book worth? Nothing, is what.

She made some sads all over Chris Matthews's nice glass-top desk, which had probably just been Windexed:

It just sounds very "consultant" to me, this could be the shortest book tour ever if he's really "softening" his position on immigration, I don't think he is ...

[wonkbar]<a href="http://wonkette.com/605625/donald-trumps-new-daddy-turned-dead-breitbart-into-most-delightful-bigoted-shthole-on-internet"></a>[/wonkbar]He better not be, else Ann might die and her new book about Donald Trump will get sent to the remainders even faster than usual! She blames all those lovey-dovey "consultants" he hired, like Fuckface McGoo from Breitbart and that Kellyanne lady, whose commitment to Racist Sparkle Motion Ann Coulter is clearly beginning to doubt. She said later in the interview that she is going to have to do some hot, sexxxy constructive criticisms to Trump if he keeps talking like this.

For the record, Trump was referring to deportations, and he said, "There can certainly be a softening because we're not looking to hurt people." Speak for yourself, Pussy Donald Trump!

[wonkbar]<a href="http://wonkette.com/588194/wont-some-nice-white-person-please-give-ann-coulter-a-hug"></a>[/wonkbar]Ann NEEDS Trump to be an unhinged racist who wants to hurt people, because Ann Coulter is that kind of person. And without him reading her books about how Mexicans are all rapists, how will he even know to call Mexicans a bunch of rapists? Does he not remember how you can get the flu from hugging Latinas? Her new book is called In Trump We Trust, for god's sake, and if we can't trust Trump to kick all the Messicans out, then can we trust him to do ANYTHING he's promised? (No.) Is the entire last year and a half of Ann's life a lie???? (Probably, but we're not sure how that's all that different from her other years.)