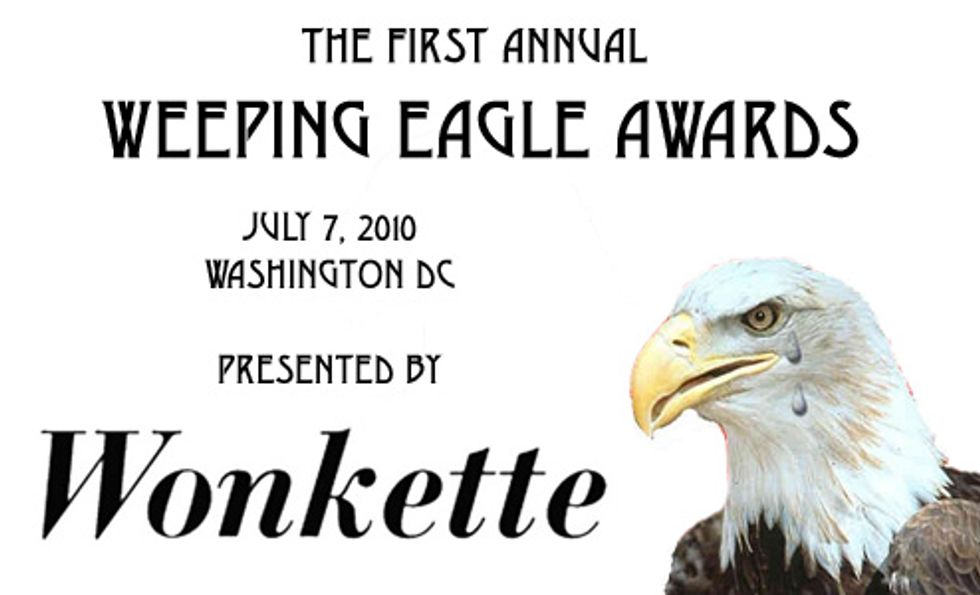 Friends, commenters, lend us your very worst nominations for the very first annual Wonkette Weeping Eagle Awards. We considered a bunch of different complicated email and web-survey methods, but finally decided the most entertaining way to choose both nominees and categories was to let the notorious Wonkette commenters have at it. And the award ceremony will take place next Wednesday, July 7, at Solly's U Street Tavern in Washington. If you're in town and you love America and the Wonkette, you are invited.

Admission is FREE because it's a "cash bar" (and cheap drinks!), but this very special awards ceremony will feature "soul food cocktailized" by Chef Chris of Penelope's Catering and "Whoopie Pies" by DC's Whoops! Bake Shop.

ONWARD TO THE NOMINATIONS: The Weeping Eagle cries for the Terribleness of American Politics and Media. We plan to dishonor the worst hacks who suck the oxygen right out of the sky with their awfulness. Writers and editors of newspapers and websites, cable hosts, lobbyists, Hill staffers and elected officials, and a few myriad guttersnipes and ne'er do wells. PLEASE BE CREATIVE and don't just say the same old Fox News blowhards or whatever. We're looking for fresh rotting meat, and we're looking for specific examples of douchery.

"Winners" will be chosen by poll starting Wednesday night and continuing through the week. Those brave enough to pick up their award in person will receive a beautiful, custom Weeping Eagle trophy and patriotic certificate of Bad Citizenship ... and, most likely, a round of drinks and encouragement to "do better next time" and "stop being such an assclown."