Another Mass Shooting In America. What The Hell Are We Supposed To Say? 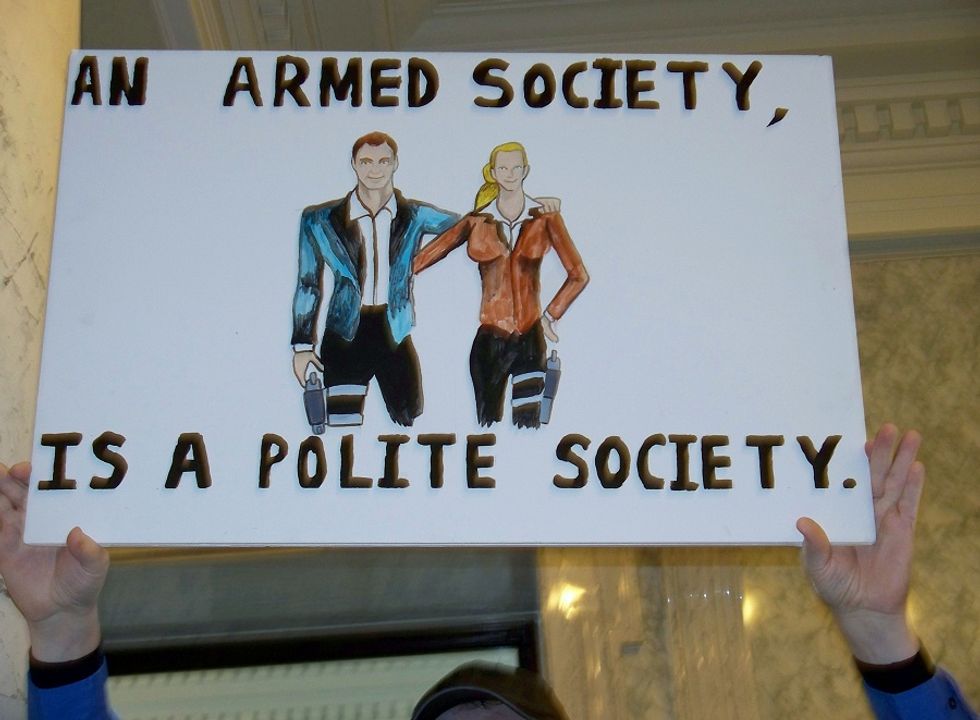 Is this really how it works?

What are we supposed to tell you about the man who murdered 10 people at Umpqua Community College in Oregon on Thursday morning?

Gawker's Sam Biddle wrote on Thursday in defense of reporters contacting witnesses, via Twitter, even if it seems invasive and rude, because that is their job. That is reporting. At The Concourse, Barry Petchesky similarly argued that the feverish reporting of every detail, following a tragedy such as Thursday's, even if those details are speculation and later proved wrong, is ugly, yes, but also necessary:

This is the gruesome business of newsgathering laid bare. It is invaluable and messy and it not only doesn’t diverge from the most basic principles of journalism, it exemplifies them. This is a massive breaking story; the nation is deliriously thirsty for facts and details; and the reporters and producers clogging up a witnesses’s timeline are the ones who are going to bring you that news.

On Thursday, within hours of the tragedy, we reported to you what we knew at the time: that Oregon's attorney general confirmed 13 were dead and another 20 wounded, and that Gov. Kate Brown, during her brief press conference, said the gunman was a 20-year-old male. As of now, none of those details appear accurate.

According to the latest reporting, by the New York Times and others, the shooter was a 26-year-old male. Douglas County Sheriff John Hanlin said during a Thursday evening press conference that the death toll of 10, not 13, was the “best, most accurate information we have at this time.” The shooter was reportedly killed in an exchange of gunfire with law enforcement; we do not know if his death is included in that current toll.

The supposed name of the shooter had been widely circulated throughout media, already combing through the internet, finding long-abandoned dating profiles and anonymous posts on forums that might belong to the circulated name. But we don't know for sure if any of the suspected online activity really belongs to that of the alleged shooter.

Sheriff Hanlin refused to even say the shooter's name.

“Let me be very clear, I will not name the shooter,” he said. “I will not give him the credit he probably sought prior to this horrific and cowardly act.”

He also encouraged reporters “not to glorify and create sensationalism for him. He in no way deserves it.”

There are other rumors that may or may not be true. One of the witnesses at the shooting told reporters that the shooter was asking students to state their religion. It didn't take long for the internet to convert that report into a “fact” that the shooter was targeting Christians. But we don't know.

The darker corners of the internet are shamelessly posting other claims about the shooter's identity and motives. But we don't know.

There are interviews with distant acquaintances of the alleged shooter: neighbors who live in the same apartment complex where he allegedly lived, even an interview with a woman who claims to have regularly ridden the same bus that he did, when he lived in Torrance, California. She told the Times, “He always seemed anxious” and that he always wore earphones.

Other supposed neighbors say he was quiet, he kept to himself — don't they always? — and that he wore “a military get-up.”

Other neighbors say the alleged shooter's mother said that her son had mental issues. Is that why he took the lives of 13, or 10, or whatever the final confirmed number ultimately is? During his address on Thursday night, President Obama said that “it’s fair to say that anybody who does this has a sickness in their minds.” But “sickness” isn't a diagnosis. Was he bipolar? Schizophrenic? Did he have borderline personality disorder? Had he ever received treatment? Was he medicated? Should he have been? Was he unable to access proper mental healthcare? Would it have made a difference? We don't know.

Here is something we do know, or at least, we think we know. According to The Daily Beast, a 30-year-old Army vet named Chris Mintz charged the gunman in a heroic attempt to save the lives of his fellow students and was shot five times. He was later taken to a nearby hospital where he underwent at least one surgery. He is expected to recover, although according to his family, he will have to learn to walk again.

The Daily Beast writes that it is his name and life we should focus on, and not that of the killer's.

“Think of Chris Mintz, who was shot while rushing a killer on his son’s sixth birthday,” writes Michael Daly. “Forget the zero and remember the hero.”

We all know the course this tragedy will take. More details will emerge about the alleged killer, including the coroner's office's confirmation of his name. Every trace of his online life will be published, consumed, interpreted. Those who oppose any restrictions on gun ownership at all will claim that the reason 10 people are confirmed dead is because we need more guns and fewer restrictions.

“There is a gun for roughly every man, woman, and child in America,” the president said Thursday night. “So how can you with a straight face make the argument that more guns will make us safer?” He insisted that “we should politicize” the routine mass shootings that are unique to America.

Mike Huckabee, presumably with a perfectly straight face, posted on Facebook his disgust with the president, for being “quick to admittedly politicize this tragedy to advance his liberal, anti-gun agenda.”

Huckabee immediately added his own politicized agenda, despite claiming we do not yet know enough details to make any such conclusions, by stating “it's clear that gun free zones are sitting duck zones.”

There will be others who make these same arguments. We already know that. It's what happens. The answer is more guns, some will say. The answer is more gun control, others will argue. Better mental healthcare in this country will also be proposed, though mostly by the same people who rigidly oppose healthcare of any sort. Those who think stricter gun laws are the answer, the only acceptable answer, will ignore how often mental illness is linked to such tragedies and the thousands of lives it also claims every year.

Insults and allegations will be hurled. And, in all likelihood, absolutely nothing will change. Families will grieve, bodies will be buried, columns will be written, perhaps legislation even proposed and opposed. The American people, by a large majority, want us to do something to make it stop. But we won't. There have been 294 mass shootings in America this year. Will we act before it's 295?

We could, as other professional writers and editors have suggested, regurgitate for you every last detail, which may or may not be true. Will you feel better informed if we show you a photograph of the alleged killer holding a gun? It's out there, you can easily find it. Do you want to know the kind of music he enjoyed? Or what his MySpace page looked like? Will that help you to understand? Will it make you care? Will it motivate you to act?

In August, after the last shooting that momentarily horrified a nation, when two young TV reporters were gunned to death on air, we promised to make every effort to tell you what we knew, instead of urgently repeating all unconfirmed rumors. We will keep that promise to you now, again.

And we promised this as well:

We will talk about how yes, it is time, it is fuck fuck fuck FUCKING long past time, to talk about gun reform. Especially in a place like Virginia, where it is practically mandatory for all men, women, children, and puppies to be armed at all times.

Oregon, where this most recent tragedy occurred, is not unlike Virginia. Gun restrictions are few and lax. Sheriff Hanlin has said, in the past, that he will not comply with any Obama administration gun control laws. After the massacre in Newtown, Connecticut, other sheriffs wrote letters insisting they would not enforce any new federal gun restrictions they deem “unconstitutional.”

Earlier this year, Oregon enacted a new law requiring background checks for private gun sales. Josephine County Sheriff Dave Daniel said he would not enforce the new law, though he primarily cited budgetary concerns, rather than constitutional ones.

There have been no new federal laws for them to enforce. The Second Amendment remains intact. Mental healthcare in this country remains a disgrace. There have been 142 campus shootings since Sandy Hook, and thousands more are dead from shootings since then, many whose names we don't know, whose families have grieved in private, without condolences from the president.

Are we really going to act out this same play, over and over, everyone reciting their well-rehearsed lines -- ban guns, ban gun-free zones, the wingnuts said this, the gun-grabbers said that, blame Obama, bring back prayer, here is the killer's face, here are the victims' names -- because that is all we know how to do?