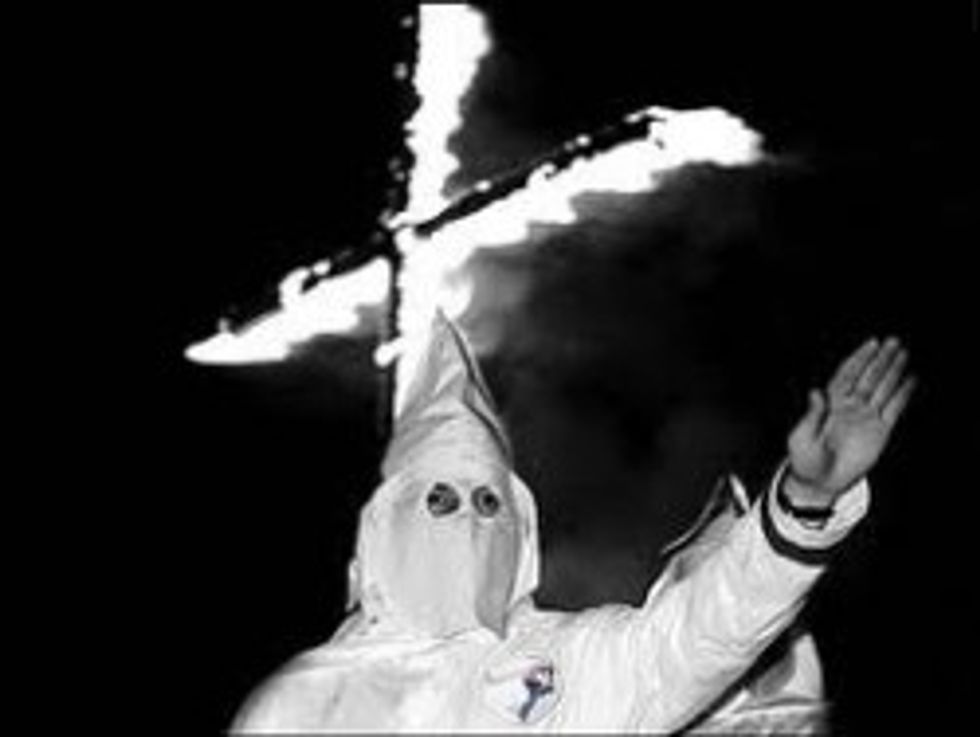 There is a thing calledAmerican Renaissance, and it is not very nice. And there is a man named Robert Weissberg who liked to go to their meetings and discuss "how Jews feel about the schwarzes" and "the future of white nationalism" and who wrote for National Review until ... oh, right about last night, when poor Rich Lowry murdered him from the Internet. It is hard to be Rich Lowry lately; all those racists that had moved in and taken over, completely without his knowledge!

Unbeknowst to us, occasional Phi Beta Cons contributor Robert Weissberg (whose book was published a few years ago by Transaction) participated in an American Renaissance conference where he delivered a noxious talk about the future of white nationalism. He will no longer be posting here. Thanks to those who brought it to our attention.

There is a letter on the Internet from Robert Weissberg, demanding some other (presumably liberal nogoodniks) Jews not interrupt an American Renaissance meeting because it would be "a shanda for the Jews." We think Robert Weissberg does not have a strong grasp on shandas.

I see you are trying to organize a disruption of the upcoming American Renaissance meeting. This is a serious mistake and you are hurting Jews.

Let be absolutely clear. I am Jewish, a strong hard-line supporter of Israel, an AIPAC benefactor, and so on and so on. My mother fled Poland in 1938 and she left behind most of her family. I raised both my children Jewish. On the other side, I've written for the AR publication and attended several meetings.

You have it all wrong. I'd estimate that there are more than a dozen Jews who regularly attend AR meetings, several who speak at them, and so on. I know Jared Taylor personally and have invited him to eat at my house (and served Kosher wine, to boot).

There is a Nazi element there--the Storm Front--and Jared is trying his best to get rid of them. But, there are also anti-Semitic elements at most major universities--this is a sad fact of modern life.

If you persist in doing what you plan to do, this will be a shanda for the Jews. Cheap thrills, at best. It will only strengthen the few remaining crackpots who openly hate Jews.

We do not know ANY JEWS who would join an organization that has even one Nazi in it even if the organization is "trying" to get rid of them. (How hard is it to say you can't come in? Very hard we guess. It just wouldn't be mannerly.) So this guy is clearly a VERY SANE PERSON and NOT AT ALL BIZARRELY SUICIDAL.

Here is video of Weissberg's very calm and reasonable address to American Renaissance in 2000. We haven't found the particular address on white nationalism yet (sounds awesome!) but we now present Robert Weissberg's Jooz 'N' Blacks Too: Electricified Fence Bugaloo. It is terrible. A smattering:

When Jews get together and talk about blacks, if they're really being forthright and honest they'll use the term "schwarze." ... It is not necessarily a negative word. It is not the same thing as the word nigger. Sometimes there's a degree of affection. 'Ah, I heard Mrs. Schwarz got a new schwarze, ah how nice, how nice!' 'Dumb schwarze' is only for extraordinary cases of stupidity, because 'dumb' is expected. As are laziness and "alcohol-induced mayhem." The image that comes to mind is one that's simpleminded, impulsive, easily induced by trinkets kind of thing. This, you will notice [smiles shyly] is extremely close to the traditional Southern image of blacks.

So this was like a Shirley Sherrod thing, right, where he then STRENUOUSLY DENOUNCES all of the above?! Er, no, it does not seem to be. Anyway, enjoy. We will all meet back here in one hour for our group suicide, because everything is The Worst.