Anthony Bourdain Made Us Appreciate A Lot More Than Just Food. But The Food Was A Pretty Big Deal. 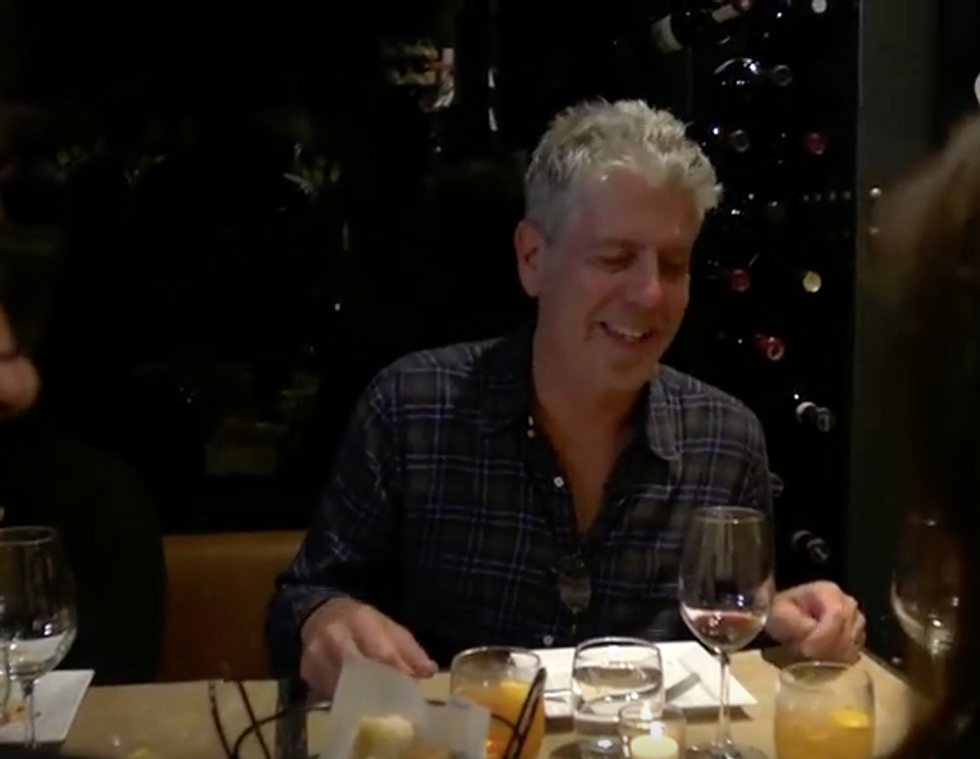 The past couple years have felt like a collection of escalating crumminess, from the Trump election to Nazi parades to regularly scheduled school shootings, so we often take solace in whatever we can find to bring us some joy in a "weary world." That's why this morning's news about Anthony Bourdain was the ultimate punch in the gut:

Anthony Bourdain, the chef and gifted storyteller who took TV viewers around the world to explore culture, cuisine and the human condition for nearly two decades, has died. He was 61.

CNN confirmed Bourdain's death on Friday and said the cause of death was suicide.

"Chef," and certainly "celebrity chef" -- a term he never took all that seriously -- feels too small a description for Bourdain. Those of us who savored his 2000 memoir Kitchen Confidential and his long-running series "No Reservations" and its followup "Parts Unknown" found in Bourdain a model for living. Be casual. Be adventurous. Explore and celebrate everything different. How do you learn about a people or a culture? Eat with the locals, without fuss or pretense. "Indian food won't kill you," he famously said. (And, yes, for God's sake, you can eat fish on Monday now.) Bourdain's example has inspired how my wife and I travel and experience the world. Bourdain's death hits hard because it seems impossible that such an outsized personality could just vanish. What's even harder to reconcile, of course, was the nature of his death. He lived what many of us, from a distance, imagined was the best possible life. Writer and actor (and fellow Southerner) Jen Richards tweeted something very similar to what I felt when I heard the news:

I have to be honest, this makes me doubt I’ll make it. Not today. Don’t worry, I’m fine today. But in the long run. I’ve been suicidal since I was a child. If he can’t make it, the person who lives the way I thought was best and fullest, what chance do I have escaping the dark?

Unfortunately, sometimes when life appears the most perfect, you yourself feel the most hopeless. This contradiction frustrates us, because humans, as a species, are driven to make sense of the insensible.

When Kate Spade died earlier this week, people immediately started latching on to anything that might fit into our preconceived, mostly inaccurate notions of why people die from suicide. In Spade's case, there was speculation related to "marital problems" or even ""business concerns." There was a similar reaction after Robin Williams's death in 2014: He had "serious money troubles." His health was failing. This all makes "sense," and I think it explains the flood of well-intentioned "make people know you love them" tweets whenever a famous person dies from suicide.

The losses of Anthony Bourdain & Kate Spade are leading many people to reflect. We never truly know what is happening in another’s life. Take time to listen & talk with those you love. Small acts of kindness can make all the difference. If you are struggling, call 1-800-273-8255.

This isn't bad advice, per se. I'd also recommend it if a loved one is living with cancer. However, we also recognize that cancer can't be cured with a pep talk or a night of Netflix and chilling. Suicidal depression is also an illness sufferers are more inclined to hide from loved ones because of the perception of "weakness" or worse, "selfishness." Those close to Spade expressed genuine shock over her death:

"I think the Kate that we knew was incredibly spirited and jovial and I think this is just a hard time," [Spade's friend, celebrity stylist Joe] Zee said on "GMA" Wednesday, the day after Spade’s suicide. "It's hard for me to speculate what happened at home behind closed doors, but the Kate that really I knew was always with a smile."

Spade's husband, Andy Spade, said in a statement to ABC News that his wife had been suffering from anxiety and depression for more than five years. He said her death was still "a complete shock."

What goes on behind closed doors for people with depression is very often different from what friends and even close family members see, experts say.

"Once you are struggling with depression and feel that admitting it would be a kind of defeat, you become invested in concealing it," said Dr. Jonathan Rottenberg, director of the University of South Florida Mood and Emotion Lab. "The longer that goes on, the more difficult it becomes to reverse and take off the mask."

Suicide is a serious public health issue, accounting for almost "45,000 deaths in 2016 alone," and if it seems like we're hearing about more of them lately, there's a reason for that:

Suicide rates have increased in nearly every state over the past two decades, and half of the states have seen suicide rates go up more than 30 percent.

That is why the Centers for Disease Control and Prevention in Atlanta decided to take a comprehensive look at suicides from 1999 to 2016.

"Suicide in this country really is a problem that is impacted by so many factors. It's not just a mental health concern," says Deborah Stone, a behavioral scientist at the CDC and the lead author of the new study. "There are many different circumstances and factors that contribute to suicide. And so that's one of the things that this study really shows us. It points to the need for a comprehensive approach to prevention."

Bourdain, Spade, and Williams all died from the same method, which has led to garbage people "joking" about "rope control," which demonstrates not just a lack of empathy but ignorance of the reality that guns just make suicide attempts more successful:

Suicide is the 10th-leading cause of death in the U.S.; in 2010, 38,364 people killed themselves. In more than half of these cases, they used firearms. Indeed, more people in this country kill themselves with guns than with all other intentional means combined, including hanging, poisoning or overdose, jumping, or cutting. Though guns are not the most common method by which people attempt suicide, they are the most lethal.

Ultimately, I hope the current focus on how Bourdain died doesn't overshadow how he lived. He was an honest yet still kind man, in a time when blunt honesty is used as an excuse for cruelty. He was an outspoken advocate for the #MeToo movement who didn't shy from confronting the sins of his own industry:

“Right now, nothing else matters but women’s stories of what it’s like in the industry I have loved and celebrated for nearly 30 years — and our willingness, as human beings, citizens, men and women alike, to hear them out, fully, and in a way that other women can feel secure enough, and have faith enough that they, too, can tell their stories. We are clearly at a long overdue moment in history where everyone, good hearted or not, will HAVE to look at themselves, the part they played in the past, the things they’ve seen, ignored, accepted as normal, or simply missed — and consider what side of history they want to be on in the future.”

I've reached a point in my own life when I feel like I shouldn't ask someone important to me, even if in this instance they're someone I never met, why they left the world so soon but instead thank them for being here at all. The random coalescence of matter that produces the individual human being is, dare I say, miraculous, and for 61 years, Anthony Bourdain shared that miracle with us. Thank you, Tony.