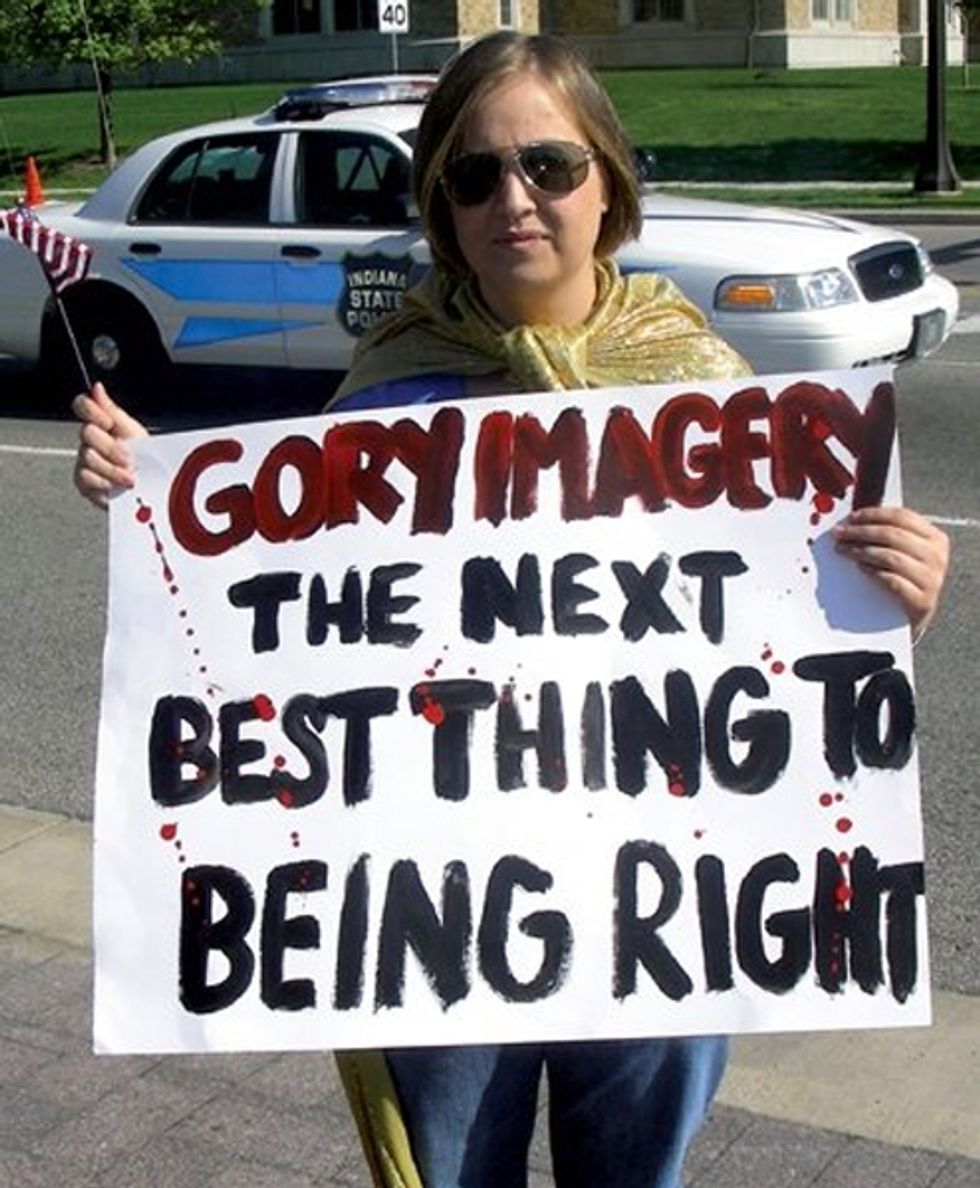 start your kid's day off right

You know what's fun? When you decide your precious babbies deserve only the best education, but you don't actually have money/want to spend money to send them to a private school, so instead you finagle your way into one o'them "high-performing charter schools." But then your little darlings make their way to school to learn about shapes or physics or fuck if we know we do not have kids, and instead your precious is confronted with garish, alarming, enormous pictures of aborted fetuses.

Two Rivers Public Charter School alleges in a complaint filed in D.C. Superior Court that the protesters have engaged in “extreme and outrageous conduct” during the past several months, targeting schoolchildren as young as 3 with gruesome images of aborted fetuses and messages about the “murder facility” going in next to their school. The school is asking the court to order protesters not to talk to the schoolchildren or approach them outside the school.

If you clickity-click the link above, you'll see some idiot standing there with a sign that says "THEY KILL BABIES NEARBY. Tell your parents to stop them." (Hell no we are not including that picture here because that picture belongs to WaPo, and we do not feel like being in trouble for having stoled it. Just click over there and come back. We'll wait.) Now, we realize that the thought process behind this is that little Ivan or Maria will see the sign, run home, babble about abortion, and open mommy and daddy's eyes to the travesty next door.

Where do we start with how dumb and awful this is? First, parents are generally not persuaded by the whims or whines of their children. Those parents already love baby-killing or they do not. Your kid coming home and boring you to death at the dinner table about it isn't going to change their minds. Next, do you really think the kind of parents who send their kids to this sort of school were not cognizant of the fact that the Abortionplex will be going up next door? Finally, do you think that the parents are getting mad at the not-even-yet-operational Abortions R' Us next door, or are they getting mad at you fuckers who block their children from getting to school? Of course the school sued your ass, protesters. They do not under any circumstances want to stop being a wildly popular school, and they are not going to be a wildly popular school with you nutsacks hanging about.

Since then, protesters have repeatedly waved graphic images at children as they walked toward their school, allegedly telling students that “they kill kids next door” and urging them to tell their parents to stop the “bloodbath that’s coming,” according to the lawsuit. The school claims that demonstrators have crowded the school’s drop-off lane and protesters have followed families up to the front door or down alleys behind the school when students tried to seek alternate entrances.

Yeah, that seems like a suboptimal way for your kid to start the day. Also, the DC-based bigwig protesters -- the people who are named in the lawsuit -- contain among them at least one person who is ... let's say less than savory.

The protesters named in the lawsuit include Robert Weiler Jr., a Maryland resident who served a prison sentence for plotting to bomb an abortion clinic[.]

He seems nice. We're sure the school and the parents are thrilled to have this goddamn Robert Dear wannabe organizing protests outside their door. Man, we hope the school crushes it in this lawsuit.