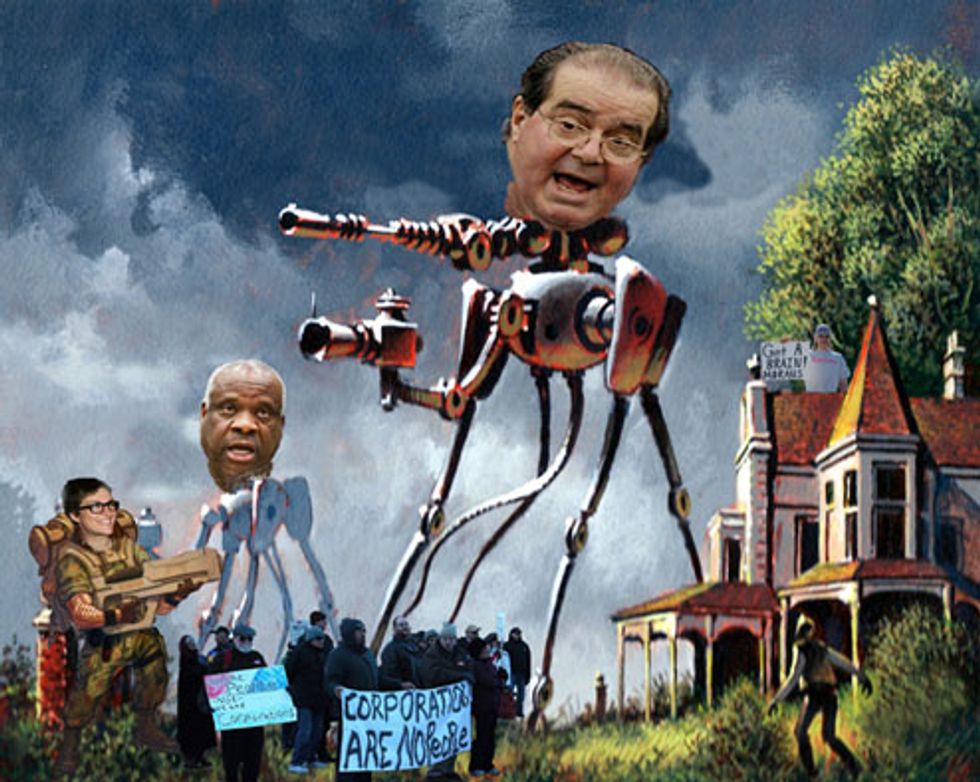 Last week we told you the story about how Notorious RBG was sippin' that purple drank at the State of the Union, and the internet collectively exploded from how awesome she is. Again.

Ginsburg made those comments at an informal event at George Washington University, which was also attended by Antonin Scalia, the Squidward to Ginsburg's Spongebob. In the course of discussing the upcoming Supreme Court case that could decide the fate of same-sex marriage nationwide, Scalia asked the audience not to consider him "anti-gay," which is kind of like Bryan Fisher asking that you not consider him "anti-Jew" but rather just "pro-Inquisition."

That last sentiment would almost be poignant if it weren't for the fact that even the Old Testament God would look at some of the anti-gay stuff Scalia has said and respond "Yeesh, brah. Don't you think you're being a little harsh?" We like to imagine God is Keanu Reeves, circa 1989. We don't judge you for your beliefs.

Scalia is the man who, while dissenting in Romer v. Evans in 1996, famously compared homosexuality to murder, polygamy, and animal cruelty, as in something reprehensible that people had a right to outlaw. He also argued that homosexuals were not an identity but rather a people defined by conduct, not unlike smokers, gun owners, or drug addicts. How dare you, sir. We'll shoot up black tar and chomp down on American Spirits with the best of them, but don't you dare compare us to gun humpers. We don't lie nearly that much about our dong size.

Later, Scalia again dissented in Lawrence v. Texas, the ruling that struck down sodomy laws, which if you remember was only issued 12 years ago. How filthy cretins like your Wonkette lived in those pre-buttsex times (if you could even call it "living") is a mystery of the ages.

Anyway, Scalia's dissent in Lawrence is remembered to this day for the fact that he went as close to full-Westboro as you can go in a legal brief. Scalia managed to compare homosexuality to "fornication, bigamy, adultery, adult incest, bestiality, and obscenity," which just sounds like a fun St. Patty's Day if we're being honest. He then went on to say that being gay was absolutely a crime that people could prosecute, just like child pornography, in that both are "matters pertaining to sex." That's like saying cooking and murder could both be outlawed in that both are matters pertaining to knives.

He even had the brass pair to argue that if the SCOTUS didn't uphold an earlier decision (Bowers v. Hardwick) that determined people have no inherent right to sexual privacy, that meant that just about any state prude law could be thrown out:

Uh, Antonin? Unless you're working with a Constitution written by the Talibani religious police, it's not illegal to jerk off, cheat, bonk before marriage, or cuss in the privacy of your own home. Any state law that criminalizes those absolutely should be called into question, so thanks for making that argument for us.

The rest of the dissent is just sliding down that slippery slope and landing in a big puddle of santorum. Gay stuff is icky to some people, ergo it's cool to outlaw it because that's how a constitutional republic works (spoiler: it is not). But even if you ignore all that, Scalia ended his dissent by insisting "I have nothing against homosexuals," which might be why he gets along so fabulously with Alabama Chief Justice Roy Moore and all his many gay friends. They don't hate homosexuals, they just don't see them as people deserving basic rights. That's much better.