Apparently Sometimes There Are 'Officially Sanctioned Purposes' For Posing With Corpses 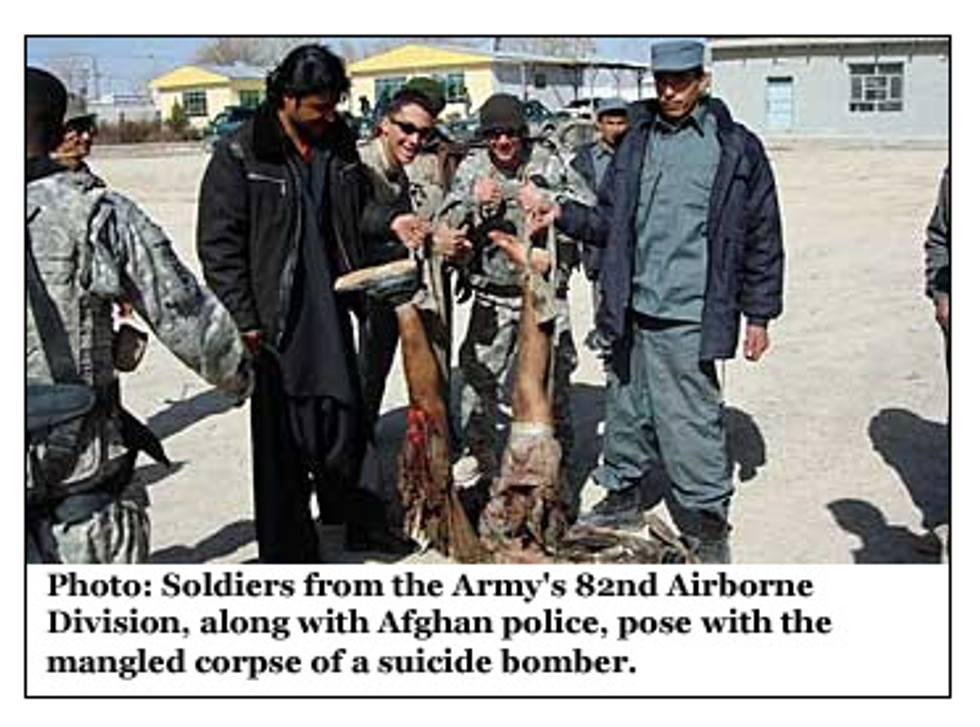 TheLA Times has published a selection of photos of troops from the 82nd Airborne Division posing with limbs from Afghan bombers. But what is this weird part of the story?

"It is a violation of Army standards to pose with corpses for photographs outside of officially sanctioned purposes," said George Wright, an Army spokesman. "Such actions fall short of what we expect of our uniformed service members in deployed areas."

So what would be an "officially sanctioned" purpose? Osama pix or GTFO?

Two soldiers posed holding a dead man's hand with the middle finger raised. A soldier leaned over the bearded corpse while clutching the man's hand. Someone placed an unofficial platoon patch reading "Zombie Hunter" next to other remains and took a picture.

The Army launched a criminal investigation after the Los Angeles Times showed officials copies of the photos, which recently were given to the paper by a soldier from the division.

U.S. military officials asked The Times not to publish any of the pictures.

Times Editor Davan Maharaj said, "After careful consideration, we decided that publishing a small but representative selection of the photos would fulfill our obligation to readers to report vigorously and impartially on all aspects of the American mission in Afghanistan, including the allegation that the images reflect a breakdown in unit discipline that was endangering U.S. troops."

Somewhere Lynndie England is smoking a cigarette and wistfully humming "For the Good Times." [LATimes]