Are There Any Women Bill Cosby Didn't (Allegedly) Rape? 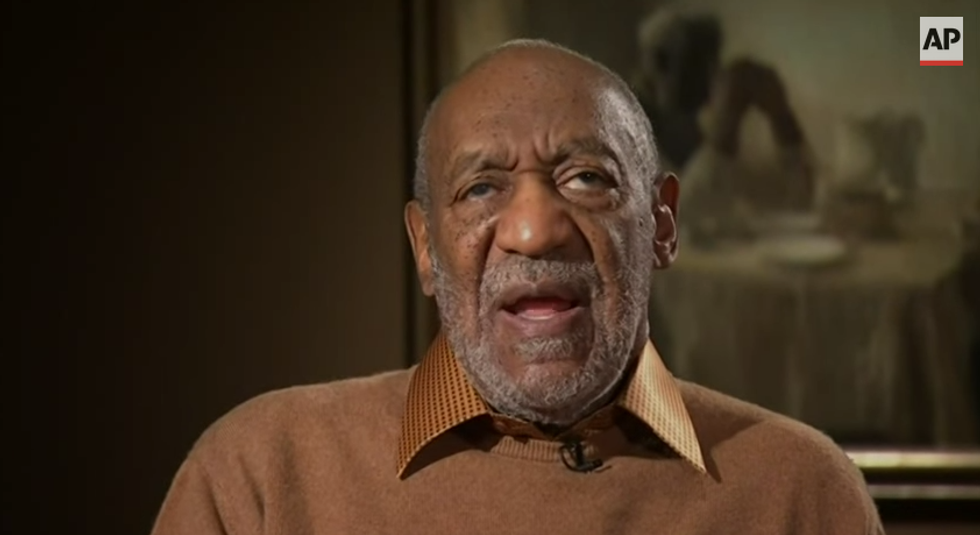 When woman after woman kept coming forward in the Tiger Woods adultery scandal, I kept hoping it would hit 18, just for all the wonderful “18 holes” jokes that would practically write themselves.

It was pretty easy to keep lighthearted about that whole thing because the sex was consensual, and there was something inherently funny about such a goody-goody turning out to be such a cad. Now we have another goody-goody American treasure icon facing more and more accusers by the day, and there’s nothing funny about it because it’s not even about sex. It’s a violent crime—no, a lifetime of violent crime—being alleged here.

A second reporter has been able to confront Bill Cosby about the accusations, and the AP has released the full 4 minute video. The interview was recorded two weeks ago, but the AP did not release this section of the tape until yesterday.

Cosby’s answers to the questions are not particularly interesting (“No, no, we don’t answer that” and “there is no comment about that”), but what happens next is: Cosby puts pressure on the interviewer to “scuttle” his response.

“I would appreciate it if that was scuttled,” he said, adding, “I think if you want to consider yourself to be serious, that it will not appear anywhere.”

Then he said, “We thought AP had the integrity not to ask,” and, “I think you need to get on the phone with his person [the interviewer’s boss] immediately.”

At the time the interview was conducted, there was little more than the Hannibal Buress brouhaha bringing the decades-old allegations into the present, so Cosby got his way. Then, three women came forward to share their detailed stories, and the AP reversed course.

In the 24 hours since the AP interview was released, two more women have come forward:

Actress Louisa Moritz of One Flew Over the Cuckoo’s Nest and Up in Smoke claims Cosby forced her to perform oral sex backstage at The Tonight Show when they were both scheduled as guests in 1971.

(Cosby’s attorney responded by saying: "We've reached a point of absurdity. The stories are getting more ridiculous.")

Attorney Tamara Green claims Cosby drugged and sexually assaulted her when she was an aspiring actress in the 1970s.

Meanwhile, CNN black hole expert Don Lemon is being criticized for asking one of the alleged victims why she didn’t just chomp down on Cosby’s dick. He says he’s sorry IF “my question struck anyone as insensitive,” and IF NOT, then he’s not sorry and you should eat a dick.

Hey, Don, here’s how shit works in the real world of journalism: either you think it was a legitimate question and you stand by it no matter how people feel, or you’ve come to the conclusion it was an inappropriate question and you regret it. This is an “EITHER/OR,” not an “IF/THEN.” Do you think you should have asked the question or not?