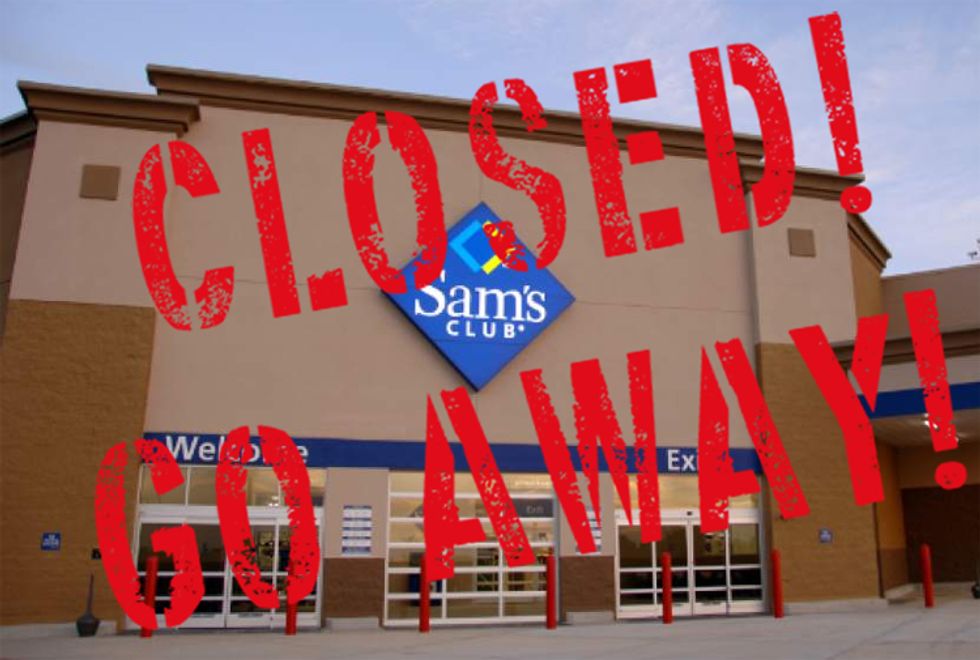 Base photo from Walmart's corporate site. Because we care.

Walmart proudly announced yesterday that it was incredibly stimulated in its job-growth area by the passage of Republicans' Great Big Tax Cut for Rich Fuckwads, so it would be raising its minimum starting wage to $11 an hour, expanding family leave benefits, and bestest of all, it would get on that headline-grabbing $1,000-bonus train -- for "qualifying employees," at least. Paul Ryan was so impressed the took a minute away from his busy schedule -- figuring out where to abandon old people now that polar ice floes are disappearing -- and tweeted out the great news:

[wonkbar]<a href="http://www.wonkette.com/627294/rejoice-workers-corporations-got-their-tax-cut-so-prepare-to-be-trickled-upon"></a>[/wonkbar]As we pointed out during the first round of fake corporate jobgasms, there was actually less to the wonderful news than met the eye. For starters, whatever the effects of the tax cuts, the economy is getting strong enough -- THANKS, OBAMA! -- that Walmart has been fighting with Target to attract employees who don't have too many facial tattoos and are willing to accept the fairly low wages, capriciously changing work schedules, and nonunion jobs typical at big-box stores, even as online shopping cuts into both retailers' market share. Target went to an $11 starting wage in September, and will be gradually raising that to $15 an hour by 2020, so Walmart is mostly playing catch-up, regardless of tax cuts.

And those princely $1,000 bonuses are even more chimerical than those at some of the other companies that tried to curry headlines, favor, and week-old chicken with their bonus plans, as they will only go to employees with 20 years seniority, while workers with 15 to 19 years of working at goddamn Walmart will get $750. Other employees will get progressively less, based on how long they've worked at Hellmart. That's works out to an extra $10 a week if you get the whole enchilada. The total outlay for the bonuses was estimated at about $400 million.

Guess how much additional profit Walmart will get from the tax cuts? A tax expert consulted by the New York Times estimated Walmart could see its taxation reduced by $2.2 billion a year, which puts those bonuses in perspective. That's why they call it trickle-down economics: the benefits to Walmart are huge, and what the workers get is just piddling.

There's also another itty-bitty problem with the idea that the tax cuts are a huge improvement for Walmart employees. Within a few hours of trumpeting those worker benefits, Walmart also announced that, oh yeah, it would be closing 63 Sam's Club stores, Walmart's evil (and comparatively ugh boring) version of Costco warehouse stores. Heh, yes, well, hmmm, just business, you see. While some Sam's Club locations will stay open a few weeks longer, many were closed and locked when employees, who had no advance notice, showed up for work yesterday:

Those employees learned their store would be closing when they found the store's doors locked and a notice announcing the closing, Sam's Club workers told Business Insider. At some stores, employees were turned away by police officers.

Yup. Management let the police know to show up, but didn't tell the employees. Hell of a way to celebrate that tax cut, huh?

So shortly after Walmart CEO Doug McMillon gave a speech saying, "Tax reform gives us the opportunity to be more competitive globally and to accelerate plans for the U.S." and touting the "guiding themes" of "lower prices for customers, better wages and training for associates and investments in the future," Sam's Club CEO John Furner was getting ready to send out his own email message to any employees who hadn't already learned about the closures from a nice person with a badge and a gun:

After a thorough review, it became clear we had built clubs in some locations that impacted other clubs, and where population had not grown as anticipated. We've decided to right-size our fleet and better align our locations with our strategy. We will be closing some clubs, and we notified them today. We'll convert some of them into eCommerce fulfillment centers — to better serve the growing number of members shopping with us online and continue scaling the SamsClub.com business.

Hey, you're not being laid off! You're being right-sized! And if you're lucky, maybe you'll be able to work in one of the 10 stores (out of 63 being closed) that becomes a fulfillment center for online orders. While Walmart didn't say how many employees would be shitcanned, Business Insider did some back of the envelope math, noting "Each Sam's Club warehouse employs about 175 people, meaning more than 11,000 people could be impacted."

Oh, and besides closing some stores, giving over 10,000 employees the boot, and giving very limited bonuses to some of the remaining drones, how else is Walmart putting its tax windfall to work to Make America Great Again? Walmart already announced back in October that it would be doing a $20 billion stock buyback, to increase its share value.

But look on the bright side: with that microscopic pay increase, you can bet the annual Walmart employee food drive for Walmart employees will get some extra-nice donations this year! Hooray! More lima beans for the kids!

Yr Wonkette is supported by reader donations. Please click here to help us meet our payroll, which means Yr writers don't have to be greeters at Walmart.