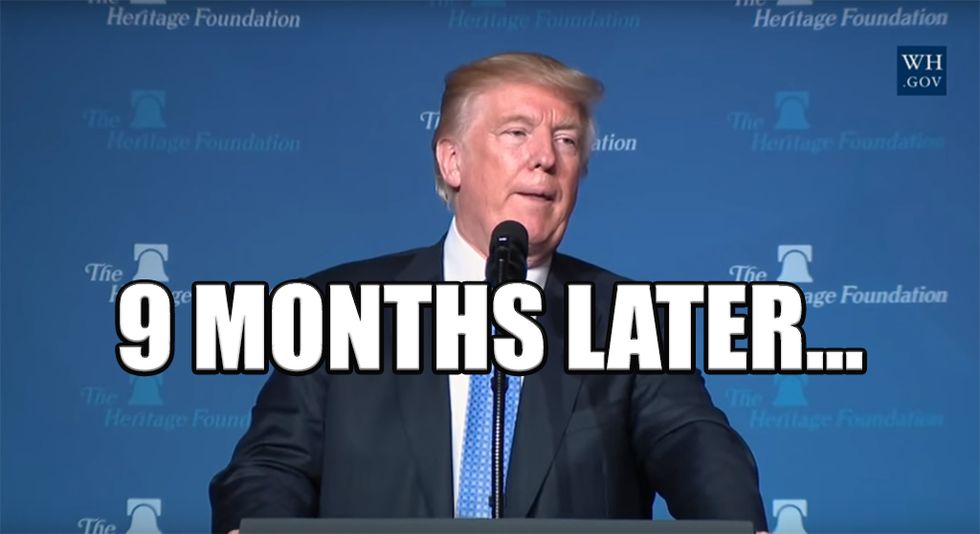 Florida Democratic Rep. Frederica Wilson is righteously pissed at Donald Trump for treating the death of one of her constituents, Army Sgt. La David Johnson, as a chance to attack Barack Obama -- and then, only after being called out for his delaying a call to relatives at all. Early this morning, Trump called her a liar in a tweet shortly after she appeared on Morning Joe to criticize Trump's statement to Sgt. Johnson's widow. Trump reportedly told the woman "he knew what he signed up for, but when it happens, it hurts anyway," and tweeted his denial just after Fox and Friends accused Wilson of politicizing the incident. We're not going to joke about this, but here's a Go Fund Me Page for a scholarship fund for Sgt. Johnson's kids.

Missouri Senator Claire McCaskill will head to Trump's White House to have a fancy dinner with Ja-Vanka where they'll attempt to get her drunk so she'll say "Yes" to the Trump tax cuts for the wealthy. The Prince and Princess have been trying this tactic for some time, but nobody is calling them back after their dates.

John McCain SAYS he supports the Senate version of budget resolution that would allow the the Trump tax cuts for the wealthy, but that's also because nobody has actually written a bill yet.

Lindsey Graham and Rand Paul are bitching at each other like an old married couple about supporting the Trump tax cuts for the wealthy, and it's absolutely amazeballs.

Steve Mnuchin is trying to scare people into supporting the Trump tax cuts for the wealthy by threatening markets will tank if it doesn't pass, then later stating that it was an “absolute guarantee” that Trump would sign a YUGE tax bill by the end of the year.

It looks like the Murray-Alexander ACA fix is already dead after Republicans started walking away when Trump began bitching.

Trump gave the best speech to the Heritage Foundation last night, belting out timeless hits like "Merry Christmas" and "Ronald Reagan," plus freedumbs, and moar coal.

John McCain is being a grumpy old man, kicking HR McMaster and Jim Mattis to the curb, and calling Steve Doocy's kid A Idiot for asking stupid questions during a brief presser.

Deep pocketed Trump donors are looking to punch their way into establishment politics with fat wads of cash, and the Heritage Foundation is considering all sorts of people to lead their little club of lunatics, from Cubs co-owner Todd Ricketts to hapless hedge fund hick JD Vance.

New FEC disclosures SHOCKINGLY show how much MOAR money people are dumping into Trump properties in an an attempt to buy favors from Trump.

David Zatezalo is Trump's nominee for the Mine Safety and Health Administration, presumably because he knows how to get foremen and workers to be "You're Fired" and accused of sexual harassment when they point out OSHA violations.

Prince Kushner has "You're Hired" Charles Harder, that dickhole lawyer who Peter Thiel used to kill Gawker. Has anyone else noticed that Harder seems to show up whenever there's a sex tape involved?

ICYMI, Trump tried to take credit for ISIS "giving up," despite the fact that Iraqi and US-backed forces have been doing all the grunt work.

Sarah Huckabee Sanders was talking with conservative blowhard Hugh Hewitt when she looked into her crystal ball and said Americans are "going to be begging for four more years of President Trump." GOD, NO!

Trump's White House accidentally let slip a bad infographic that alleges a lack of manufacturing jobs leads to an increase in abortions, infertility and spousal abuse. Yes, of course it's being used for the NAFTA renegotiations.

GOOD NEWS, EVERYONE! A generic ballot poll suggests that Democrats COULD stomp the shit out of conservatives and cranks next year in the election, BUT DON'T GET COCKY!

Steve Bannon flew to Arizona to whip his sycophants into a frenzy for GOP Senate hopeful Chemtrail Kelli Ward. He bitched about Goldman Sachs (his former employer) and the establishment Republicans who keep his whiskey dick swimming in cash.

Trump is up and tweeting this morning about James Comey in an effort to change the subject.

The great state of Maryland is suing the shit out of Betsy DeVos for trying to scuttle a rule that forced for-profit schools to be less grifty.

A city councilman in Boulder, Colorado, wants to play games with direct democracy by giving voters an app to vote on issues. If you still think this is a great idea, just look at the White House.

A Georgia GOP gubernatorial candidate, Michael Williams wants to give out bump stocks to show "solidarity with gun owners across the nation" as any talk of regulating firearms gadgets that make weapons shoot faster is "merely cheap political lip service from career politicians." Bless his heart.

Three Chicago cops involved in that United flight that saw a doctor dragged off the plane have been "You're Fired" for use of "excessive force."

Egypt has been using social media photos to stalk and arrest gay people for being gay.

Uber is being driven out of London as officials prefer cabbies with "The Knowledge" more than an app, but many also wonder if this is partly due to anti-immigrant sentiment.

American employees at Facebook and Google worked on a campaign of anti-immigrant election fuckery in in several swing states, but we're sure Zuckerberg will just deny this too.

A British guy used to be a Nazi, but then he realized that not only was he Jewish, he was also gay. Better late than never.

The neo-Nazi douchebag who organized the Charlottesville Unite the Right rally, Jason Kessler, has been arrested for doxxing an activist.

Daphne Caruana Galizia, a Maltese journalist who helped release the Panama Papers, was killed by a car bomb, and her murder is raising questions about how dangerous it is to be a reporter today.

And here's your late night wrap-up!

We're supported by readers like you, so give us money to keep doing all the things!