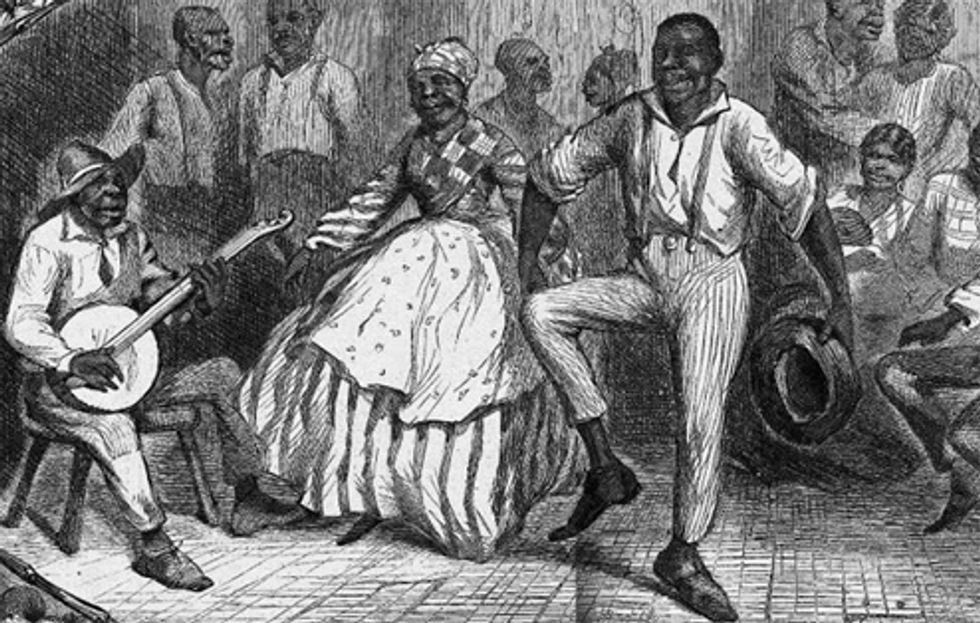 An Arizona charter schoolis being criticized for using textbooks that "actively promote religious interpretations of American history." The main texts for U.S. History classes at Heritage Academy in Mesa are two books by Glenn Beck's spiritual predecessor, Cleon Skousen, a rabid anticommunist and pal (but not member) of the John Birch Society. The books, The 5,000 Year Leap and The Making of America, are required reading, and explain such obvious facts as the Divine inspiration of the Declaration of Independence and the Constitution, and the benevolence of slavery as an institution. Because of all that Godstuff, Americans United for Separation of Church and State argues that the books are not legal for use in a state-funded charter school, which seems to ignore the documented fact that the Constitution itself was ordained by God, which those liberals would know if they just read the books, sheesh.

The Arizona Republic (autoplay video at link) is all up in this mother, which has to be a non-issue because the state looked into it and found no problems with a book saying that the Founders got all their ideas directly from God:

The D.C. group first sent complaints to the Arizona State Board for Charter Schools in late 2013, demanding that the school stop using Skousen's books.

State charter-board officials say Heritage Academy is not breaking any laws by using the writings in an advanced history class. The board closed its investigation in April.

The lady in charge of the board explains why saying that God Did America is perfectly OK under the First Amendment:

Religious books, including the Bible, may be used in public schools as long as they are part of an academic class and not a religious lesson, said DeAnna Rowe, executive director of the State Board for Charter Schools.

She said it is not the role of the charter board to dictate which books a school may or may not use in its curriculum. School officials in Arizona select books, not state officials, she said.

"Our focus is on whether the school is upholding the mission it describes in its charter," Rowe said.

She said Heritage's mission is clear.

"Just as we have schools with a math and science focus or an arts focus, this charter school has a history focus."

Presumably that would also mean she thinks using the Book of Genesis in a biology class would be fine, since it would then be an academic focus, not a religious lesson. Yay.

In addition to the Godstuff, Skousen appears to -- amazingly -- be a pretty bad historian. University of Baltimore legal scholar Garrett Epps told the Arizona Republic, "Skousen's account of the growth and meaning of the Constitution is quite inaccurate," and he also had some peculiar views on the institution of slavery and the origins of the Civil War:

"Parts of his major textbook, 'The Making of America,' present a systematically racist view of the Civil War. ... A long description of slavery in the book claims that the state (of slavery) was beneficial to African Americans and that Southern racism was caused by the 'intrusion' of northern abolitionists and advocates of equality for the freed slaves," Epps said.

Epps said he believes that "any student taught from these materials in a public institution is being subjected to religious indoctrination" and "is also being crippled educationally and will be ill-prepared to take part in any serious program of instruction of American government and law."

Among other fun facts kids learn about slavery in The Making of America, one essay argued that

“if pickaninnies ran naked it was generally from choice, and when the white boys had to put on shoes and go away to school they were likely to envy the freedom of their colored playmates.”

This passage (RawStory substitutes "black children") is especially dear to Arizona, since, as many of you will recall (haha), it is this very use of the term "pickaninnies" that former Gov. Evan Mecham defended as perfectly fine and lovely and historical, and definitely not racist -- just one of the many reasons we all loved Ev.

Heritage says that it's planning to scale back the use of the Skousen books, not because of any complaints, but because they're so long that they crowded out other valuable historical material. We probably don't want to know.