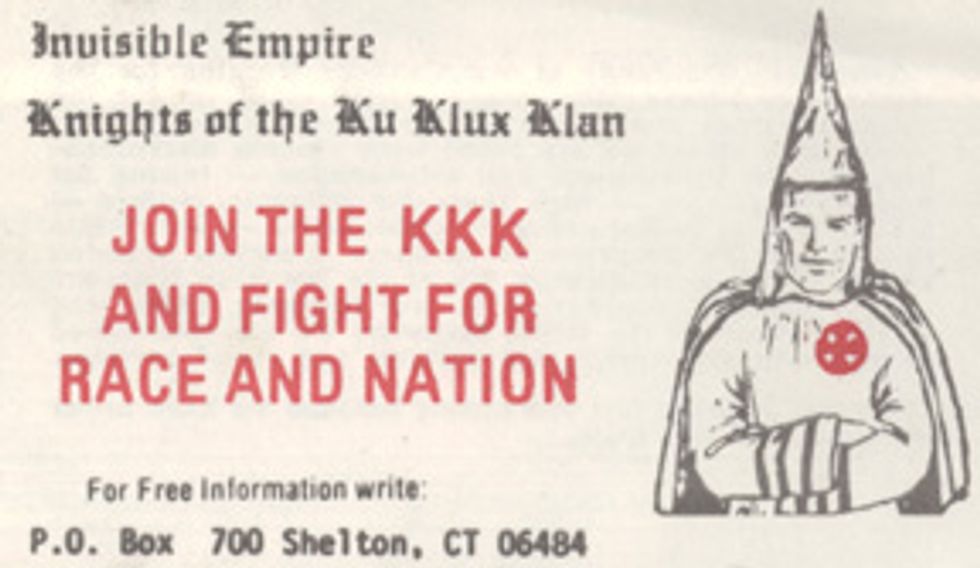 Hard to find even the Gallows Humor in this story, so maybe we won't even try. Maybe it's time to admit that large chunks of America are in the hands of unreconstructed racists and vulgar idiots, and that the popular election of a black man as president just might've pushed these furious, economically doomed old white people into a final rage that is going to end very, very badly. Ready? Here you go: An Arizona elementary school mural featuring the faces ofkids who attend the school has been the subject of constant daytime drive-by racist screaming, from adults, as well as a radio talk-show campaign (by an actual city councilman, who has an AM talk-radio show) to remove the black student's face from the mural, and now the school principal has ordered the faces of the Latino and Black students pictured on the school wall to be repainted as light-skinned children.

This is America, in 2010, and there's a dozen more states and endless white-trash municipalities ready to Officially Adopt this same Official Racist Insanity.

From the Arizona Republic:

A group of artists has been asked to lighten the faces of children depicted in a giant public mural at a Prescott school. The project's leader says he was ordered to lighten the skin tone after complaints about the children's ethnicity ....

R.E. Wall, director of Prescott's Downtown Mural Project, said he and other artists were subjected to slurs from motorists as they worked on the painting at one of the town's most prominent intersections.

"We consistently, for two months, had people shouting racial slander from their cars," Wall said. "We had children painting with us, and here come these yells of (epithet for Blacks) and (epithet for Hispanics)."

The children depicted on the mural, as we mentioned before but feel compelled to repeat, are little kids who go to the school -- "a K-5 school with 380 students and the highest ethnic mix of any school in Prescott. Wall said thousands of town residents volunteered or donated to the project."

And these children, for the past several months as this happy mural encouraging "green transportation" was being painted by local artists, have been treated to the city of Prescott's finest citizens driving by and yelling "Nigger" and "Spic" at this school wall painted with pictures of the children who attend the school. And this has been encouraged by a city councilman, Steve Blair, who uses his local radio talk show to rile up these people and demand the mural be destroyed.

And now the faces are being painted white, "because of the controversy."

Remember where you were, when you could still laugh about teabaggers and racists and Arizonans, because funny time is almost over. If the unemployment keeps up -- one in five adult white males has no job and will never have a job again -- and people keep walking away from their stucco heaps they can't afford and the states and cities and counties and towns keep passing their aggressive racist laws to rile up the trash even more, shit's going to very soon become very bad, and whether it's the National Guard having wars in the Sunbelt Exurbs against armies of crazy old white people who are finally using their hundreds of millions of guns, or whole Latino neighborhoods burned to the ground the way the Klan used to burn down black neighborhoods a century ago, we are in for a long dark night and no light-colored paint is going to fix that. [AZCentral via Wonkette operative AZW88]

UPDATE I: Vile talk-show creep and Prescott councilman Steve Blair has been fired from his radio show. Will Prescott dump him as a town councilman, too, or do they love racists too much?

UPDATE II: The school principal finally grew a pair -- after the whole country was outraged by his demand that the brown kids be "lightened" on his school's mural -- and went out in public to say the mural would stay as it is, and that he was wrong. Video here.