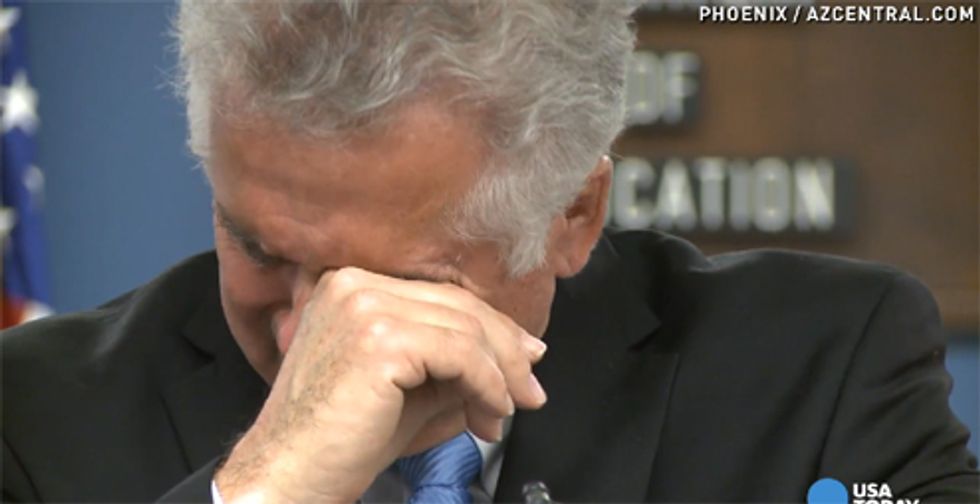 Arizona Superintendent of Public Instruction John Huppenthal held anews conference Thursday where he apologized -- an actual "I'm sorry" apology, not a "sorry you were offended" apology -- and "renounced and repudiated" his anonymously posted comments on political blogs, saying that the comments had been hurtful and that the revelation that he'd written them had damaged the state Department of Education. Oh, and while he is really sorry about all the racisming and hammering on the dirty poors, he's also not going to step down, because something something honor, something something duty to the children. And then he broke into tears --  Glenn Beck would envy that weeping -- and was escorted gently away from the podium by an aide. That's shows how much He Cares.

Huppenthal began the news conference like some kind of Klingon cosplayer, tossing the word "honor" around like the kind of guy who'd post blog comments under the name "Thucydides":

He explained that his blog comments were motivated by how much he loves America and opportunity, a passion which led him to go a bit overboard. For instance, his call for the Spanish language to be eradicated from public use was merely the result of his fervent belief that fluency in English is the best way for your Spanishes to get ahead in this great country of ours, and so maybe he got a bit carried away -- it just happens when you love America and English so much, you know?

Asked about the comment in which he wrote that Barack Obama "is rewarding the lazy pigs with Food Stamps (44 million people), air conditioning, free health care, flat screen TV’s," Huppenthal again explained that it was both inexcusable but also what he really believes, just that he worded it all wrong and stuff:

"I think a lot about economics and how do we create opportunity. ... That in no way shape or form excuses the way I expressed those sentiments. That's why I repudiate those blog comments. It's OK to talk about policy. It's not OK to talk about people."

See, what he meant was that all those benefits being showered on the Poors is what makes them into lazy pigs, not that they're lazy pigs to start with. It's all a matter of nuance.

Huppenthal also said that he was sorry for dishonoring the Department of Education, especially his chief of staff, Merle Bianchi, the poor yutz who has had to field reporters' questions about the blog comments:

"That hurtfulness is in a number of ways," he said. "I've thought about it deeply, especially given my comments about bringing honor to the system. Obviously, my hurtful blog comments didn't do that. ... The person I feel most for, to the point of my own tears, is my assistant."

Huppenthal then began crying. A moment later, he was whisked away, and the news conference ended.

It is not known whether Huppenthal was searched for glycerin capsules before the performance.

Yr. Wonkette anticipates that we'll be back in a few days to cover Huppenthal's decision to return to the private sector, where he can be more effective in making the world a better place. The small-government advocate has held various public offices since 1984, so he may be a bit rusty on the whole "private enterprise" thing. Maybe he could wash dishes, and really get to know some folks who speak Spanish.