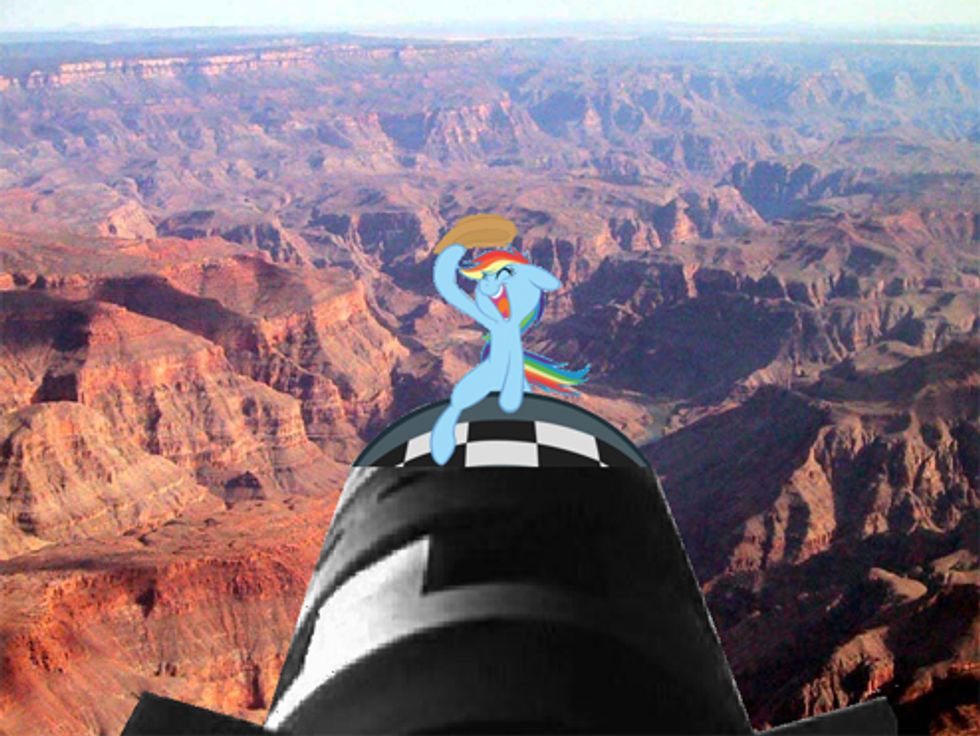 The Arizona Senate voted Thursday toapprove a bill aimed at one of the pet obsessions of preppers and Obama conspiracy theorists. The proposal would

require the Department of Emergency and Military Affairs to develop and issue recommendations for how to survive if an electromagnetic pulse hits Arizona or the entire United States, theoretically sending the country into a dark age.

The Senate voted 24-3 in favor of the measure, sending it on to the House.

There's a thin...no, make that a fairly bright, well-defined line between disaster preparedness and nutty conspiracy paranoia, and the Arizona Senate seems happy to jump across it.

Not too surprising to find that the bill was introduced by state Sen. Dave Farnsworth, the tea party rugged individualist who thinks that municipal restrictions on where you can raise chickens are a form of big-government tyranny. And why is he concerned about an EMP attack? Just good ol' common sense, you know:

So if it that happens, says Farnsworth, it just makes sense to be ready. And Farnsworth is really not pleased with the fact that in most disasters, people rely on the government to pick up the pieces instead of being ready to take care of themselves:

"Really, all we have to do is be prepared enough to hang on until outside help comes," he told colleagues. But this kind of disaster, Farnsworth said, could be nationwide.

"In essence, there's no help coming," he said. "We need to be locally prepared for a long-term struggle ...

"As a society, we've become so dependent on the government and on our society the way it is," he explained. "Going to the grocery store, there's always food there."

Having the state prepare a list of what people should have in case of such an emergency, he said, would in essence be a wake-up call.

"Hopefully this will start the discussion and the awareness that we as a government cannot feed all these people," Farnsworth said. "As responsible citizens, we need to do our part to make our own private preparations."

Yes, that's a very realistic possibility, especially when you consider Barack Obama's nefarious plan to nuke America. It's just about our favorite conspiracy theory, so much juicier than a mere forged birth certificate. The broad outlines, cobbled together by internet weirdos, involve one or more missing nuclear warheads that will supposedly be detonated high in the atmosphere to knock out the electrical grid and create the pretext for Obama to declare martial law, so that in the resulting chaos, Russian troops that are already in America for "training exercises" can take over, possibly aided by Canadian and UN forces. Oh, and the whole thing may be orchestrated by George Soros, who will somehow make a killing in the financial markets by betting against America.

Now, let's be completely clear that Farnsworth hasn't said anything about the conspiracy stuff -- Farnsworth says he became aware of the threat from a novel's depiction of an EMP-caused apocalypse, so as far as we can tell, he's merely motivated by the slightly less crazy idea that an EMP attack by a foreign enemy is likely or merely possible, and that it's enough of a threat that Arizonans should take steps to be ready for it.

In the world of preppers, there's any number of doomsdays that you need to be ready for, and every smart family needs to be ready to fight off all their former friends and neighbors once the SHTF (gotta have an acronym for everything). And even out here in reality-land, FEMA does recommend that families have some basic supplies on hand for a few days in case of a natural disaster, so the absolute worst effect that the Arizona bill could have is that it would sell some unnecessary survival seeds and dehydrated meals, as well as encouraging people to try to shield their electronic stuff from an EMP attack that's not going to happen. Plus, you know, the state endorsing apocalyptic paranoia.

That was reason enough to vote against the bill, of course. Arizona Capitol Times reports that Sen. Bob Worsley

said he did so out of concern for how Arizona is portrayed in the media. Those concerns were heightened after the negative portrayal of Arizona over SB1062, the controversial “religious freedom” bill vetoed by Gov. Jan Brewer.

“I’m just worried what people might write about in the media,” said Worsley, R-Mesa. “We’re a little hypersensitive to media scrutiny about what we’re doing.”

You got it, Bob. Glad to help.

Other legislators were more enthusiastic about encouraging people to be ready, like the aptly named state Sen. Don Shooter (we swear we are not making this up -- he's from Yuma), who co-sponsored Farnsworth's bill and said that while the Federal government has shied away from national EMP preparedness, it's a perfect state-level project to educate individuals:

"This time around, it's the people who can do the most to prepare. It's even possible to EMP-proof your electronics. It just takes time ... I'll agree that an EMP attack is a relatively small threat, but if it ever does happen, most people won't be prepared," Shooter said. "That doesn't mean we shouldn't try and warn them now. God puts a watchman on the tower for times like these."

Yup, nothing paranoid there. Have fun on the watchtower of freedom, guys.