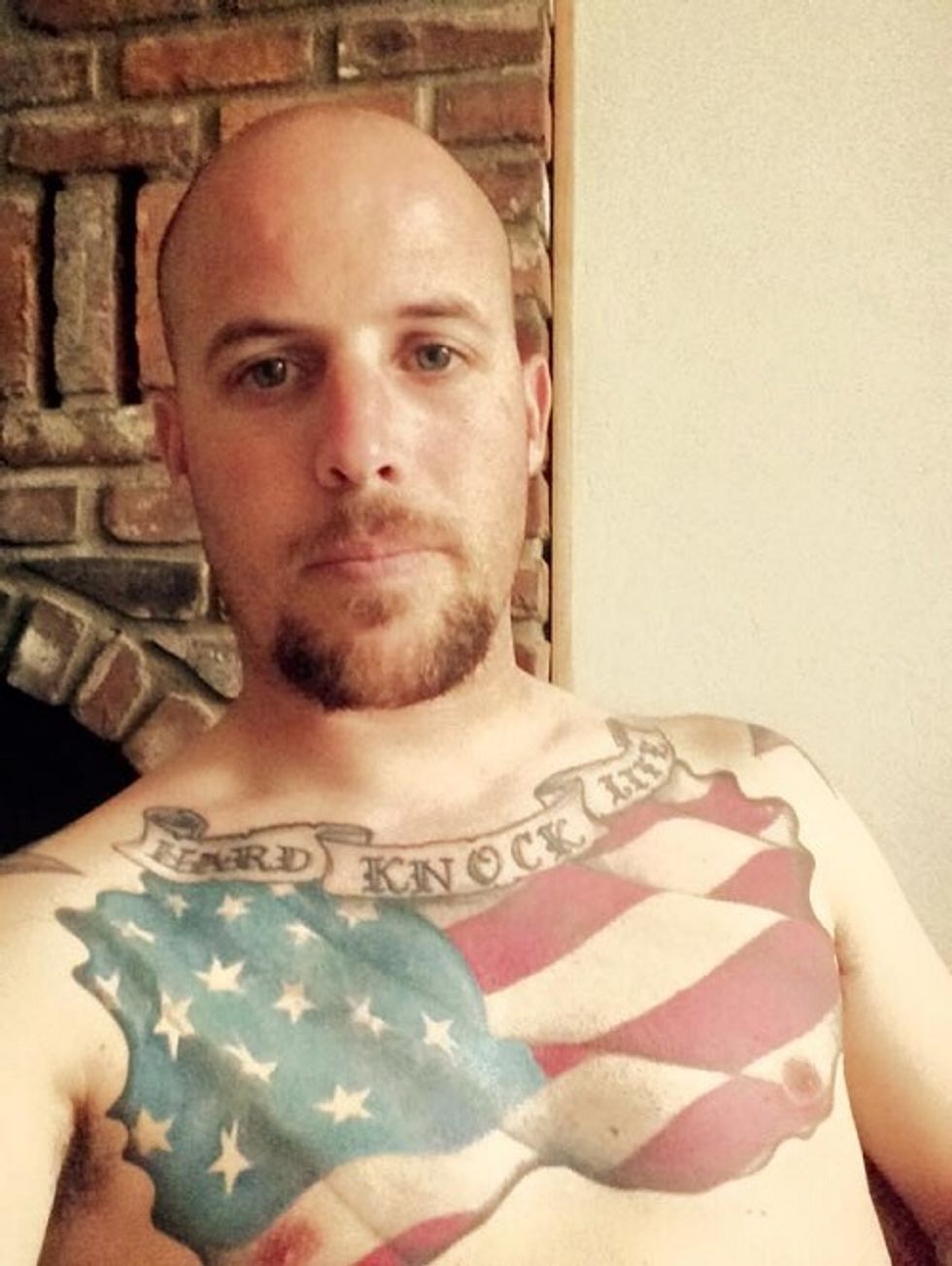 Show some respect for Jon Ritzheimer, the professional victim who organized the Great Big Scream At A Mosque Rally in Phoenix, proudly posed in his "Fuck Islam" t-shirt, claimed he has been targeted for death by radical Muslims, and whined -- in the very same Facebook post -- that "Not one news out let will interview me" but also "I just want me and my family to disappear" from public view. So of course, he's in public view again. He's selling his motorcycle so he can afford the necessities of life. Not food or rent, silly; he needs to buy more guns, because his life is still in great danger!

Ritzheimer now claims, without presenting any evidence, that "hackers" set up a fake GoFundMe account asking for $10 million, and that they also hacked his Facebook account to add two posts referring to the attempted fundraiser (those "hackers" were so sneaky, though, that they didn't add anything else).

But now he's getting kind of desperate for cash and attention, so he's selling his beloved Harley, listing it on Craigslist. An earlier version of the ad was "flagged for removal," possibly by hackers, or by one of his many enemies trying to thwart his attempt to keep his family safe.

In his Facebook post that links to the now-removed version of the ad, Ritzheimer explained he's got no choice but to sell The Precious:

The Craigslist ad lists an asking price of $11,500 and explains:

I am selling this bike for what I still owe on her. My life has been turned upside down and I can no longer make payments on this bike. I need every penny I have to invest in protection for my family. I'm not going to put the whole story on here but if your looking for a smoking deal on a bike due to my misfortune then please call me and I'll be happy to explain.

Because nothing helps you sell a vehicle like a story about how the Muslims are out to get you.

Most recently, Ritzheimer explained to Talking Points Memo why he was so fond of his "Fuck Islam" t-shirt in the first place:

He said as an atheist, he would also wear a shirt that said "Fuck Christianity."

“Yeah? I have no problem, I -- no problem wearing that,” Ritzheimer said. “The only thing is, I’m not, they’re not, if I wore an ‘F Christianity’ shirt, there’s peop-- I mean, they’re not gonna be calling for my head. You gotta look at what’s going on around the globe.”

He said he was “subconsciously” inspired to call his event a “pro-freedom of speech” rally rather than an “anti-Islam” rally because of that.

“Yeah, I mean it’s, I would say I did, I did it subconsciously,” Ritzheimer said. “It’s a quote that my mother always told me growing up and stuff, so. And I’m, I’m careful with how I word things and I don’t want to, I’m not looking to stir up the wrong crowd.”

So much like Mother Teresa! He's quite the thoughtful guy, don't you think? On Facebook, Ritzheimer was excited to share an announcement for another "Free Speech" rally scheduled for June 27 in Charleston, South Carolina; he also shared with TPM his advice for anyone who wants to organize such a rally:

“Make a fake, their own fake Facebook account -- a John Doe -- and set the event up like that,” he said. “You don’t want this spotlight. I didn’t, I -- this is not what I intended. I don’t like the spotlight. It’s hot and it burns.”

Ah! The yellow eye, it burns! He hates the nasssty publisssity, hates it! Which is why he keeps making himself available to the media -- to warn others about how terrible it is to have all this attention.

Or maybe it was an imposter who said all that to TPM. His phone might have been hacked.