Ark. Rep. Justin Harris Had Daughters' Demons 'Exorcised' Before 'Rehoming' Them With A Rapist 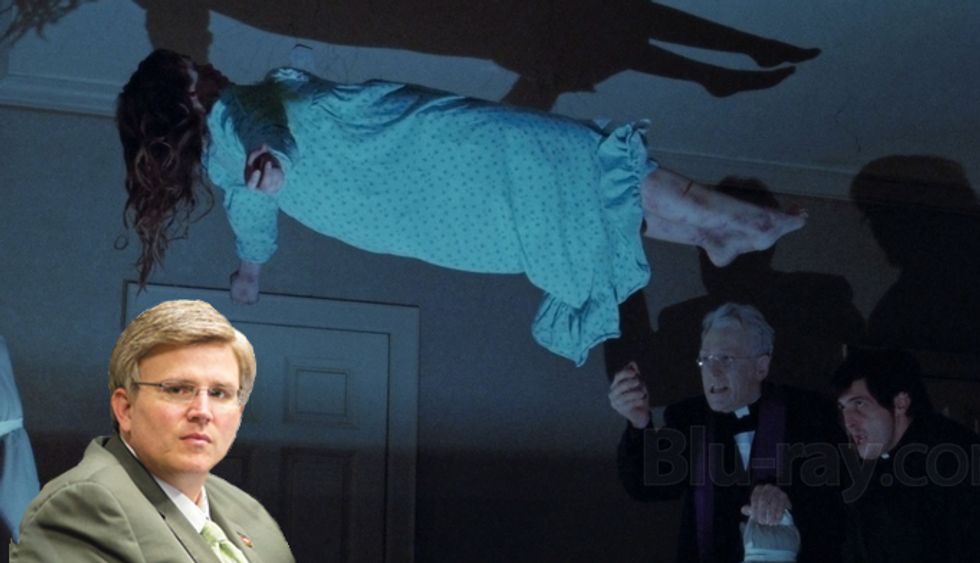 The sad, ugly saga of Justin Harris and the "rehoming" of his two adopted daughters just morphed into a B-movie horror flick. According to several people who knew the Harrises, the super-Christian Arkansas state rep. and his wife, Marsha, believed the young girls were possessed by demons and hired "specialists" to drive Satan from the children's tiny bodies. They also kept their six-year-old adoptive daughter locked and isolated in her toyless room with just a video camera to watch her so she couldn't "communicate telepathically" with her four-year-old sister.

We are actually surprised with ourselves that we didn't see this one coming, probably because we are liberal godless coastal elites.

In his press conference last week, Justin Harris said that the girls -- who were sexually abused in their birth family -- were unmanageable and violent because they suffered from reactive attachment disorder. He said they only "rehomed" the girls with their longtime friends Eric and Stacey Francis in October 2013 after the state Department of Human Services (DHS) threatened the Harrises with child abandonment charges should they attempt to return the troubled girls to the system instead. (Read Reuters's horrific investigation into "rehoming" here.]

Eric Francis was arrested in April 2014 for raping the older of the two girls, who was 6 at the time.

We'll adopt the Arkansas Times's new pseudonyms for the three sisters: the oldest, "Jeannette" (previously mostly referred to as "the eight-year-old") lived with the Harrises for five months and had the most severe behavioral issues; she was returned to DHS before the adoption was finalized and placed in a different foster home. They call the middle child (previously mostly called "the six-year-old") "Mary," and the youngest "Annie."

According to former babysitter Chelsey Goldsborough, the Harrises, though sure they could imbue the children with Christ's Godly love, didn't quite manage to do that, especially with the middle child, "Mary," who Goldsborough says

was kept isolated from Annie and from the rest of the family. She was often confined for hours to her room, where she was monitored by a video camera. The reason: The Harrises believed the girls were possessed by demons and could communicate telepathically, Goldsborough said. Harris and his wife once hired specialists to perform an "exorcism" on the two sisters while she waited outside the house with the boys, she said.

Goldsborough regularly babysat for the Harris boys and Annie, but said her contact with Mary was severely limited, because the Harrises kept Mary isolated in her room, and Goldsborough would watch her on a video monitor, entering the room only to give Mary food or water:

"The first night I was over there, I just broke down and cried with this little girl because I just felt so bad for her," Goldsborough said.

According to Goldsborough, the two girls were kept in separate rooms that were outfitted with locks, alarms and video cameras. They were not allowed to be around each other because of the Harrises' belief in demonic possession and telepathy, she said.

While Annie would be allowed to roam the house and interact with other family members, Mary was often confined to her room, Goldsborough said.

"We couldn't ever take [Mary] out. I'd watch her from a camera. I think it's crazy. They were adopted, so they're going to want TLC."

Goldsborough said that at one point,

the Harrises showed her "a picture of [Mary] where they're like, 'You can see the demon rising from her back,' and it just looked like a little 6-year-old to me." [Mary was 4 or 5.]

Another source described only as "close to the Harrises" also said that they'd seen a "video that Marsha Harris said showed a demon interacting with one of the girls. The source said demons were an 'obsession' with Marsha Harris."

Apart from the demons that were invisible to everyone but the Harrises, Mary did not apparently manifest any of the classic symptoms of possession such as levitation, speaking in an electronically altered voice, rotating her head 360 degrees, or voting a straight Democratic ticket. Even so, the Harrises brought in a team of exorcists from Alabama; Goldsborough did not witness the exorcism herself, but says she waited outside the house with the boys.

Goldsborough also said that the Harrises took away Mary's toys and books "because a demon told [Mary] not to share. ... Demons told her to not appreciate [her toys] and all that, so they took away all the toys and her colored clothes." Apparently the Harrises were attempting to fight the demons by trying to turn Mary Amish.

Again, the Harrises deny this. In last week's news conference, Harris had claimed that the family took the toys away from Mary as part of a therapeutic approach for treating reactive attachment disorder (RAD), with the idea that they would gradually be returned as rewards for her behavior improving, an approach he said was recommended by therapists at Ozark Guidance. But another professional interviewed by the Times, Dr. Peter Jensen of the Division of Child and Adolescent Psychiatry at the University of Arkansas for Medical Sciences, said that approach didn't seem appropriate:

Children with RAD may be successfully treated, especially if reached at an early age and placed in a stable, loving home, Jensen said. But "parents cannot use normal parenting. ... They have to learn skills most parents don't have — such as how to talk a child down." Therapists need to become involved. "You can have a degree in child development, but that's not a degree in child development run amok, gone wild."

To allow a child with RAD to emotionally attach to her new caregivers requires a focus on positive reinforcement; any punishment must be kept gentle, Jensen said. Attachment to a mother or father figure is "a deep, biological need and necessary for normal social development," Jensen said. With attachment comes a sense of security; without it, a child may experience a heightened wariness of his or her environment, become withdrawn, and be unable to respond to attempts at comfort.

He added that reactive attachment disorder is frequently seen in children who have been institutionalized or placed in foster care when very young, but that taking toys away from children with RAD was "just the wrong thing" and a naïve approach. The Times apparently didn't ask Dr. Jensen about the wisdom of keeping an emotionally traumatized girl locked in a room with a video camera to watch her, possibly because they feared he might injure himself or have a stroke. (Yr Wonkette has left a message with Ozark Guidance asking for comment on taking away toys and books and locking a girl in isolation as a therapeutic technique, and will update when we hear back.)

Through their attorney, Jennifer Wells, the Harrises completely denied all talk of demonic possession, because of course it sounds more than a little bit nutty. Wells released a statement reading,

"Exorcisms and telepathy are not part of the Harrises' religious practice. They followed the techniques in a book called When Love Is Not Enough, a Parent's Guide to Reactive Attachment Disorder by Nancy Thomas, who is a recognized expert on therapeutic parenting techniques."

Amazon reviews of Thomas's book detail some of her therapeutic advice:

"In the beginning, rewards and bonuses should be food, clothing or necessities."

"In the beginning, your child should learn to ask for everything. They must ask to go to the bathroom, to get a drink of water, EVERYTHING. When it starts to feel like they must ask to breathe, you are on the right track."

"The alarm on the bedroom door establishes a very clear physical limit for the child. When the alarm is working, day or night, the child can be controlled by being placed in the bedroom ... There needs to be a very substantial consequence for opening the door after being told not to. In my house, for children over 5, it is 100 to 500 (depending on their age) pushups interspersed throughout the day for a number of days and no privileges until they are complete."

Better than an exorcism? Worse? We are undecided. Actually, no we're not. It is much, much worse.

Attorney Wells's statement did not address the specific claims made by Goldsborough and by other sources, but for the moment, we're perfectly open to the possibility that the Harrises are in deep damage control mode, and that it is entirely possible that a couple of folks who run "Growing God's Kingdom" preschool -- almost exclusively through government funding, by the way -- just might believe that demons are responsible for abused children's behavioral difficulties.

One particularly horrifying part of Harris's Friday press conference was his allegation that one of the two younger girls (the implication was that it was Mary) had crushed a family pet to death. One could even sympathize with a terrorized family trying to divest itself of responsibility for the girls before something awful happened to themselves or their birth sons. The Arkansas Times refutes Harris's charge ably:

The source close to the Harrises said the pet — a guinea pig belonging to one of the boys — was killed not by Mary, but by the oldest sister, Jeannette, who had long since left the home by the time the Harrises, allegedly on the advice of therapists, rehomed the girls with the Francises.

Asked about the death of the guinea pig, Wells, the Harrises' lawyer, said via email, "A family pet, which was a guinea pig, was crushed to death by one of the children. Another pet, which was a hamster, was hurt but not killed by another child. We don't want to identify exactly which child did what. It may be in the report you have, but just in case the minors' identities are known, we don't want to be specific for their own protection."

The Harrises certainly had no problem smearing all three girls with the accusation, which any sane person would recognize as a sad indicator for future pathology and even homicidal violence; when confronted with sources who disputed them, they quite conveniently remembered the girls' right to privacy -- while declining to clear their (former) daughters of their own charges.

Go read Benjamin Hardy's full story in the Arkansas Times today -- the demon horrors are just one part of a trove of new information on the Harris case, including details on how the adoption was pushed through by a threat to cut the DHS budget -- Harris was vice chair of the committee that oversaw the state agency -- an interview with the biological mother of the girls, and the perspective of the family that provided therapeutic foster care to the oldest child, Jeanette. All of it points to the Harrises insisting on taking in children they were clearly not prepared to care for appropriately, and then -- demons or no -- abandoning them when they realized they were in over their heads.

We're also wondering if somewhere in his archives, Pat Robertson has a letter from "Justin and Marsha in Arkansas" asking what they should do about their demon-possessed daughters. But an exorcism? We're not sure -- has Harris expressed any interest in running for Governor of Louisiana?