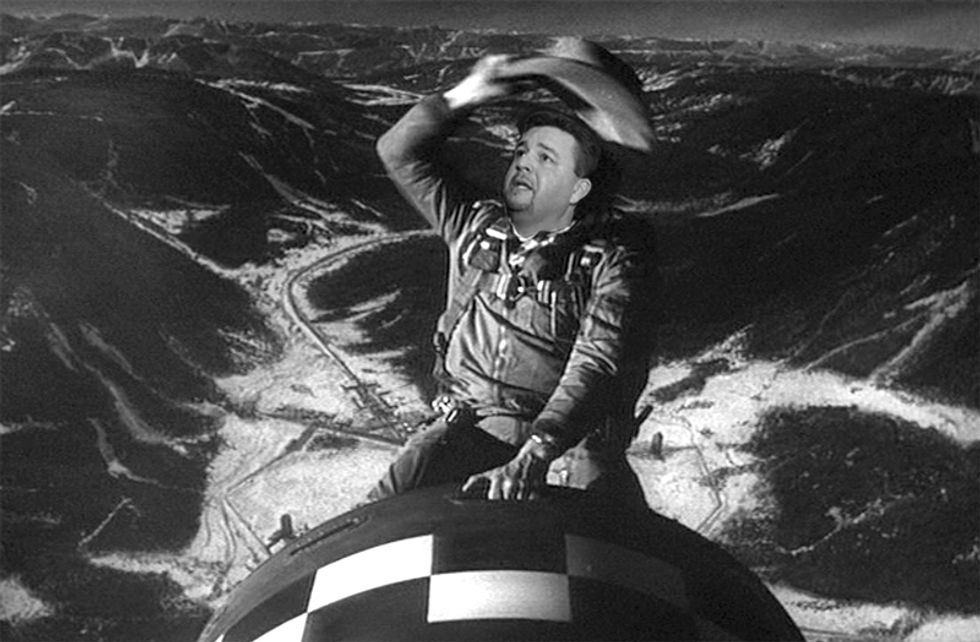 Arkansas state Sen. Jason Rapert posted an excellent idea to the Facebook for how to beat ISIS once and for all: Just nuke them! What could possibly go wrong? After all, everyone agrees that they're evil and need to be stopped, so Let's Drop The Big One Now! Here's his post -- or at least his original version of the post:

With ISIS spreading all over the Middle East and Africa and Islamic Extremists carrying out violence in Europe, The United Kingdom and even in the United States, I wonder why the civilized world just sits by when we have weapons that could wipe out these barbarians where they are concentrated? I believe it is time to annihilate the strongholds and pursue the rest till we have them all captured or killed. A strategically placed nuclear weapon would save the lives of our soldiers and quickly turn things around. It is time for the insanity to be stopped.

So yeah, just one or two "strategically placed" nukes would make everything all better, the way they always have! Can't see how anyone could object to a few nuclear strikes in the Middle East -- it's all just sand and camels anyway, amirite? Oh, but then stupid liberals started misrepresenting Rapert and pointing out pesky little details, like how ISIS doesn't have just one big Death Star base that we could take out, and how some of their "strongholds" are located in "cities" with "large civilian populations." Oh, and that a lot of the territory they control is in "Iraq," which is one of our "allies" in the region and might object to having nuclear weapons dropped on it. Not to mention minor problems like "nuclear fallout" all over the Middle East, settling on Israel and Lebanon and Saudi Arabia and such, depending on the breaks. You know, stupid liberals twisting the facts.

And when stupid liberals started pointing out that WMD in the Middle East are kind of a thing we already went to war to stop, he pointed out that he wasn't talking about giant city-busting bombs, just friendly little nukes of a few tens of kilotons. Or hundreds: The very Wikipedia article that Rapert cited to prove that he wasn't talking about Hiroshima-sized bombs notes that there's no precise definition of the yield of a "tactical" nuke, some of which are indeed of the hundreds of kilotons. Still, Rapert soldiered on -- perhaps a misnomer, since he has no military service record himself -- shifting from advocating tac nukes to "bunker buster" nukes, which we suppose would be a great idea if ISIS actually were holed up in concrete bunkers under a hundred feet of earth.

Finally, he identified the real problem with his critics: Not wanting to drop a few nukes on ISIS is obviously proof that liberals love Islamic radicals more than their own country:

Interesting that leftist liberals get on this page and hurl insults and slurs because I actually support force strong enough to stop these barbarians, but none of them say a word about stopping the evil Islamic terrorists. Perhaps they need to check their allegiances.

He liked that idea so much that he even went to the Twitter box to call out the ISIS-coddling libs:

By Monday night, he was just sick of all the lies about his position. He wasn't advocating nuking the whole Middle East, for gosh sakes! Just lobbing a few very careful little nukes that would hardly be noticed outside the ISIS strongholds that he'd be vaporizing! So he added an update to his Facebook post:

I am happy that news reporter John Lyon actually called me to verify my comments written above in their original form - he was the only person to do so today and the only one interested in the truth rather than causing confusion with misrepresentons. [sic] It is shameful that liberal bloggers Michael Cook, Matt Campbell and Max Brantley decided to play fast and loose with their false paraphrasing and suggested that I advocated an indiscriminate nuclear strike. Michael Cook wrote "Jason Rapert calls for killing thousands of women & children by advocating US drop a nuclear bomb on ISIS" from his twitter post:

Here is John Lyon's article asking me about the media frenzy Michael Cook, Matt Campbell and Max Brantley conjured up with a false narrative: http://arkansasnews.com/…/state-senator-advocates-use-nucle…

I stand firm in my support of using all means necessary to defeat ISIS and the Islamic extremists terrifying the world. They must be stopped and it will take a determined all out effort to do so.

So just stop worrying, you nervous Nellies. Jason Rapert is not a monster who wants to nuke vast swaths of civilian territory.

He is in fact a complete idiot who genuinely believes that firing off a few very carefully targeted little tiny nuclear weapons would only kill ISIS fighters in their hardened underground bunkers that are nowhere near civilian areas, and that nobody else in the region would mind the very mild dusting of radioactive fallout that would result. Jeez, stop being so dramatic, will you?