Armed White 'Oath Keepers' Descend On Ferguson, Will Definitely Calm Everything Down 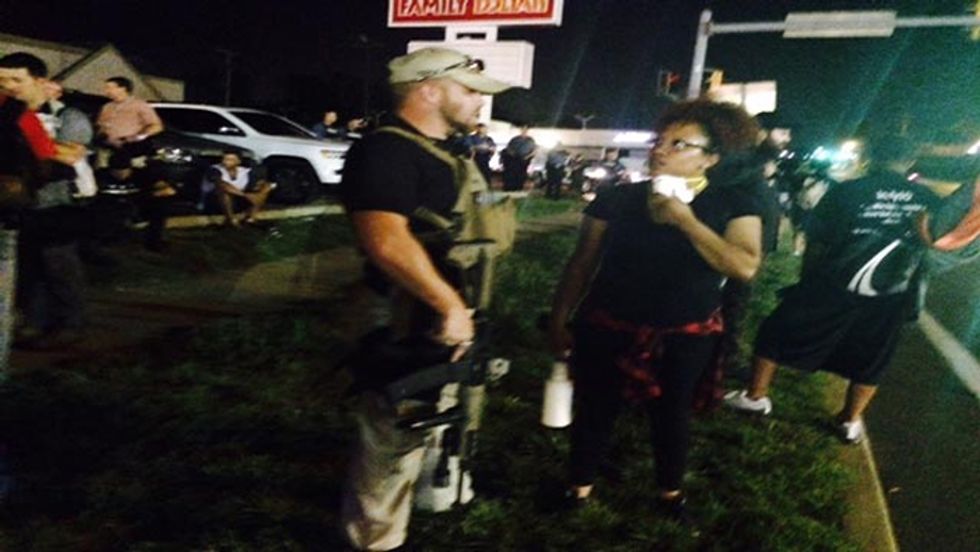 In case you were concerned that the situation in Ferguson, Missouri, might get unpleasant as people mark the one-year anniversary of the fatal shooting of Michael Brown, you can put those worries to rest now: The Oath Keepers have brought their message of paramilitary peace through superior firepower to the streets. But unlike last December, when they invited themselves to perch on businesses' roofs like snipers, for "security," this time they say they're only in Ferguson to protect a "journalist" from Alex Jones's nutbag website Infowars.com. It's not clear whether they'll also try to find some federal jackboots to have a standoff with, or flee when they get "intel" warning of a drone attack.

Reuters reports that four brave Keepers of the Oaf showed up carrying assault rifles and wearing bulletproof vests and holstered sidearms, so they could keep the Alex Jones lackey safe from possible danger. (As we all know, Ferguson is full of dangerous heavily armed paramilitary forces, and then in addition to the police, there's also a lot of black residents, too.) The Head Oaf, who gave his name only as "John" -- gotta keep OPSEC at all times and control the information battleground -- explained why the brave patriots had to be kitted out like they were headed for Tikrit:

"There were problems here, there were people who got hurt. We needed to be prepared for that," said the man, who noted that Missouri state laws generally allow the open carrying of heavy weapons of the kind that his group were brandishing.

If it's legal, even during a state of emergency, then it's a good idea. More than a few people on the scene speculated that the law enforcement response might not have been as hands-off had there been a similar group of heavily armed black men, demonstrating once more how Barack Obama has divided our nation.

"You’re going to bring some uncommissioned citizens, white citizens, into a black community like this? It's disrespectful," said Talal Ahmad, 30, who is black and has been a fixture of the last year's protests [...]

"Here, in a black neighborhood, we’re already living in a state of terror," Ahmad said.

Doesn't Mr. Ahmad understand that guns are the one thing that really brings us all together as Americans? At Infowars, we learned that, in point of fact, the Oath Keepers are beloved in Ferguson, and it's only the establishment media that demonizes them as divisive. Just look at this important evidence from Ferguson:

But were the Oaves' efforts appreciated by the hateful national media? Of course not!

Despite the fact that the Oath Keepers immediately began educating Ferguson demonstrators on their constitutional rights and having constructive conversations about how the movement should be about unity and not race hate, the media jumped on their presence and instantly turned it into another opportunity for race baiting and division.

Gosh, where on earth would anyone get the impression that the Oath Keepers are either of those things, except for all their declarations that Americans need to arm themselves against government tyranny, their fetishistic displays of military paraphernalia and jargon, and the occasional call for a U.S. senator to be executed for treason? Never mind that -- they educated the people of Ferguson about their Second Amendment rights, and also found one guy who thought a flat tax was a really smart idea, so Mission Accomplished. And since the Keepers were surrounded most of the night by a protective mob of reporters taking pictures of the armed loons, everyone stayed safe, too.

Even Chief Jon Belmar, the tear gas-aficionado who heads up the St. Louis County Police Department, wasn't too crazy about the presence of the Oath Keepers, calling their presence "both unnecessary and inflammatory," which just proves how badly everyone needs to buy more guns and ammunition, doesn't it?