Around The World With Lloyd Dangle: On The Trail Of Mitt's Money 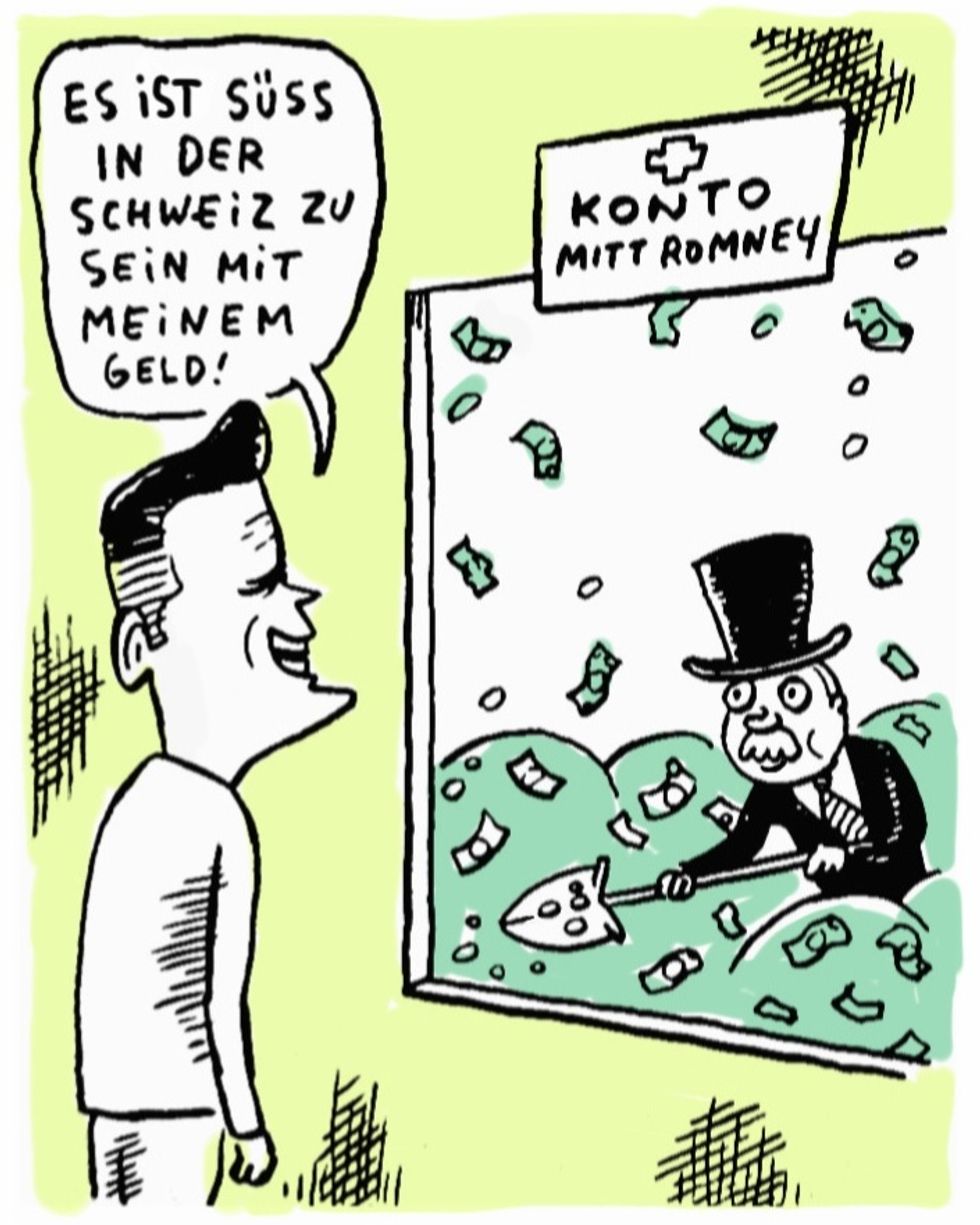 (Zurich) The train to DeGaulle Airport was so hot that the wine I drank the night before poured out of me like water from the Fontaine Saint-Michel. My shirt was soaked and my deodorant was failing, and soon I would be seated inches from another passenger on an hour-long Swiss Air flight to Zurich. I bought a bottle of cologne shaped like the Eiffel Tower from the duty free shop and doused my armpits in the men's room. Everything was okay at first but soon my eyes began to water and I realized that I smelled like a walking urinal deodorizer.

My European journey began as an attempt to get to the bottom of the festering debt crisis, but now I was

taking a detour to Switzerland––hardly even considered a PART of Europe––to embark on an investigation of a purely domestic nature. I was on the trail of Mitt Romney's money.

Zurich is a subdued city located in the Limmat Valley of Switzerland at the northwestern tip of Lake Zurich where a kebob and cup of coffee will run you about a hundred dollars. In addition to being the home to the wristwatch, fondue, cheese with holes, and the most intoxicating, heroin-like chocolate ever confected, Zurich is one of the largest financial centers in the world. There are over 200 banks in this small country, and many of them reside here at the intersection of Bahnhofstrasse and Paradeplatz. From here Mitt Romney's money can see the Alps.

"Excuse me, madame, does Mitt Romney's money live here?" I asked a flaxen-haired beauty from Credit Suisse with skin like fresh milk. It had been a full day since I applied the cologne at the Paris airport but the fragrance reeked on. She gave me a pained look.

"Nein," she said. She would not confirm the existence of a Mitt Romney account. The cunning Swiss! They know how to keep a secret. To get close to Mitt Romney's money it looked like I would have to employ deception.

I've always wondered what made "Swiss accounts" so special that the Richie Rich Mitt Romneys of the world would want to stash their fortunes in them anyway. To understand, I'd have to learn a little about Swiss law. In 1934, the Swiss Parliament passed the law of banking secrecy to prevent the Nazis from plundering the assets of Jews held in Switzerland, and to impose penalties on anyone who who would divulge private banking information.

The advent of the secret "Swiss account" was bigger even than the invention of the multi-function pocketknife and generated unprecedented wealth for Switzerland. It became the destination not just for Jews but for anybody who wanted to keep their money hidden. Not surprisingly this included a long list of criminals and malefactors both large and small.

Dictators and leaders from unstable regimes employed Swiss accounts as a hedge against "sovereign risk," the possibility that a government might freeze or confiscate their assets. Legal matters like taxes, divorce, and bankruptcy were considered private by the Swiss, so ordinary schemers, embezzlers and deadbeats also used Swiss accounts to evade their collectors and creditors.

The Swiss have come under pressure from the United States and other governments to change their banking law, in order to help catch tax cheats, but nobody resists outside demands like the unflappable Swiss. The banks have made claims of vigilance against money-laundering in recent years, but they are still believed to have plenty of "black money" (assets from illegal activity) on their books. One wonders where the robotic Mormon candidate from America fits the picture.

"I'd like to open a numbered account," I said to a rotund, mustached officer from UBS bank dressed in an olive green pin-striped suit. While I waited for him to produce the papers I snacked on a bag of Sprungli Luxembourglies, little hamburger-shaped chocolate-hazelnut puffs that have been satisfying sugar junkies since the 1830s.

"Just give me the same protection you give to Mitt Romney," I said, flashing a 50 franc note. I looked for a reaction to my mention of Romney but the banker betrayed no emotion. After discovering that 50 francs was all the money I had to deposit he pressed a hidden button behind his desk and two polite uniformed guards escorted me to the sidewalk.

Having struck out at Credit Suisse and UBS, both of Switzerland's "too big to fail" banks, I began working my way down the list. It was unlikely that the plastic plutocrat would have chosen one of the big banks anyway––ones that have been sued for access by foreign governments and holocaust victims' families––but rather he'd have stashed his loot in a smaller venue that was less likely to draw attention. Another possibility that, sadly, hadn't occurred to me was that Mitt's money wasn't in Zurich at all but at one of the older, privately owned banks in Geneva. Private banks offered yet another level of protection since they were accountable only to the wealthy owners themselves.

They may have long been enablers of heinous international lawbreakers, but at least Swiss banks had the reputation for being conservative in their banking practices. They didn't mix banking with reckless lending and speculation the way ours do in America, right? Wrong. In fact, according to a former banker I spoke to, the type of excesses we've gotten used to on Wall Street were INVENTED by the Swiss. UBS made such colossally bad bets on the US housing market that it earned the nickname, "Used to Be Smart," and was bailed out by the Swiss government in 2008 to the tune of 68 billion francs ($70 billion).

I continued trying my bogus bank customer routine at branches all over Zurich but by the end of the day Thursday I was still no closer to Mitt's boodle. The soles of my feet ached and the fact that I'd had the soulless squarehead on my mind for days had taken a toll on my spirit. I got off the tram at a stop near the Staedelhofen station, grabbed a beer and a sausage for $140, and collapsed onto a park bench. I broke out a footlong bar of dark Swiss chocolate, cut open the foil and was about to mainline it when an American passer-by dropped a copy of a magazine onto the chair beside me. Goddamn if it wasn't the August issue of Vanity Fair with ANOTHER JOURNALIST'S STORY on Mitt Romney's money! And, according to this motherfucker, Mitt Romney CLOSED his Swiss account in 2011.

So I was scooped in Schweiz, burned in Berne, humiliated in Switzerland, but every journo takes one on the chin now and then. What really disgusts me, however, is that Romney, the Bain Capital bobblehead, slipped away with his money and his reputation intact. He may have liquidated his lucre here but he's still got $30 million squirreled away in tax havens in Bermuda, Luxembourg, and the Cayman Islands. What is he hiding? Mitt Romney hasn't heard the last of me.